A senior executive with one of Scotland’s leading banks has been named the University of Strathclyde’s Alumna of the Year 2016. 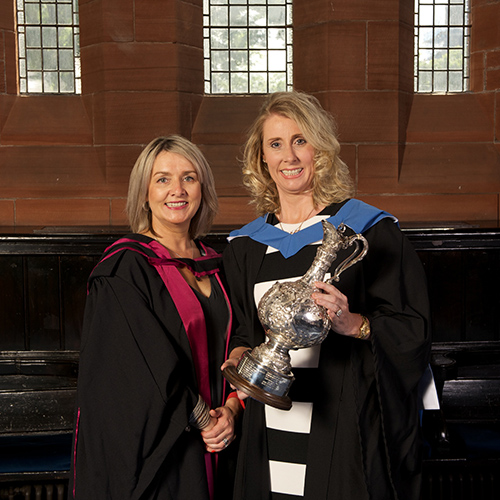 Debbie Crosbie, who holds a BA (Hons) degree in Industrial Relations from Strathclyde, has been Clydesdale Bank’s Chief Operating Officer since 2015. Her appointment came after a career of nearly 20 years with the bank, during which time she has overseen many of its operations, including a unification of infrastructure as part of its merger with Yorkshire Bank.

In 2015, she also became the first woman to have her signature appear on a Scottish banknote.﻿

'One of the very best in the world'

Ms Crosbie said: "The Scottish education system is one of the very best in the world. The reputation of our teaching and learning attracts students from far and wide; our sense of community ensures the warmest of welcomes in our cities and on our campuses when students arrive here, and the quality of life encourages many to continue to live and work in Scotland beyond their graduation. That’s as true now as it was when I graduated almost exactly 25 years ago today.

"My role in the bank changed regularly over the years, and I have been fortunate to work with, and learn from, many talented people. I’ve been involved in some very special and innovative projects; however, it is only now that I realise and appreciate the grounding that I received here at the University and how it has supported me at every step of my career."

Recipients of this award are inspirational individuals and role models for Strathclyde students, alumni, staff and the wider community. This is particularly true in the case of Debbie Crosbie.

"Over her career, Debbie has displayed ambition, boldness and innovation – important values which are shared by the University of Strathclyde and values which today’s class of 2016 are encouraged to embrace and to demonstrate throughout your careers."

After graduating from Strathclyde in 1991, Ms Crosbie, who is originally from Bearsden, worked with the Prudential Assurance Company before joining Clydesdale in 1997.

She then spent more than a decade in strategic and planning roles, playing a significant role in unifying the operating systems of Clydesdale and Yorkshire during the banks’ mergers.

She was appointed Chief Information Officer in 2008 and, three years later, her responsibilities were extended to take in payments, collections and recoveries. She became acting Chief Executive Officer for the Clydesdale and Yorkshire Banks in 2015 before taking on her current role.

Ms Crosbie is a Fellow of the Chartered Institute of Bankers and a former non-executive director of the Scottish Court Service.﻿