Estefanía came from Argentina to study an MSc in Architectural Design for the Conservation of Built Heritage.

What made you choose Strathclyde?
The course merged heritage with design, also Strathclyde was both responsive and supportive from the start.

Which aspects of the course appealed to you the most?
The fact that design was introduced as the means to achieve heritage conservation. It added contemporaneity to the study of our historical environment which I t think is needed to truly understand it and be able to operate within it.

Have you acquired any new unique skill sets while studying here?
Definitely! …most of the technical knowledge I now have as regards how to deal with historical assets, I acquired during the course. On top of that, I began to understand the significance of research and of being able to determine when and why, how and where to look for information, which at the end of the day can become the justification for Conservation.

What are your stand-out experiences, whether academic or social?
I’d never been in such close contact with historical assets. I had surveyed in the past but always the new-built, and almost superficially. Now surveys had become the opposite, almost intimate, where you would read about the building’s past as well as measure its present, linking them both in a logical timeline, understanding not only the ‘what’, but the ‘how’ and the ‘why’, and sometimes even the ‘who’.
I also made new friends to whom I am now really close, even though we all live in different parts of the world.

What is your experience of Glasgow?
I had no idea of what to expect from Glasgow when I first arrived. After some time living there, however, it started to feel like home. I discovered places I really liked, which I started visiting regularly, particularly on the music/cinema sphere. I now describe Glasgow to whomever asks me as a city with hidden gems, which needs to be explored and understood…you find its history is written all over its buildings’ walls. It really is full of surprises.

Are you aware of particular qualities or skills that you developed at Strathclyde that have enabled your successful career?

My current job is at an Architectural Conservation office, so my studies at Strathclyde definitely helped me get there. On a daily basis, I find the tools we use at work, the language, the software, very familiar, because I had a preview of it at the MSc course, which makes a great base to start from. I believe my criteria and the way I make decisions has also, to some extent, been shaped by it.

What is your career path from graduation through to your current job?
After graduating I found a part time job in the North of Scotland within the hospitality sector. While at this job, I spent the first month finishing my portfolio and sending it to different firms of my interest all over UK. Meanwhile, I was in touch with the Glasgow Institute of Architects’ Conservation committee, whom I was helping with the publication of their 150-year book. I travelled to Glasgow to attend the 150-year dinner where the book was presented.

Responses to my CV and Portfolio were generally very positive and encouraging, but no offers were coming up. After some time, quite randomly, a friend mentioned that a firm he knew was looking for an architect. At the time I didn’t know this company at all, but I thought I could as well give it a try. In the end, the interview went well, and a month after I started the new job.

I was there for six months, working on several projects, involving both new and existing buildings. I was part of the design team, which allowed for a lot of creative input. I learned about what being an Architect in the UK means, local construction methods and a bit of BIM work structure. I enjoyed it very much.

While working there, I received some very unexpected but extremely good news: I had been awarded the IHBC’s Gus Astley Student Award for my work at Strathclyde. I got to attend the Institute’s Annual School where I was immersed into 3 full days of conservation debates, activities and seminars, had fun and met a lot of very inspirational people. This had a determinant impact on my career and I will always be grateful to the IHBC, Strathclyde and my course director for it.

I had to leave the UK soon after this and I spent six months at home, working on residential projects as well as documenting Petrol Stations projects for a local company. I managed to come back by the beginning of 2020 and I now have a new job in Edinburgh, at the Architectural Conservation office where I currently work.

What do you enjoy most about your current position?

Contact with historic buildings! I had never specifically worked on the conservation of the existing environment, which is what I chose to specialise in, my passion. At this point I’m just starting, so I’m being trained in a bit of everything from surveying and recording, to designing and documenting. It’s really exciting.

What aspect of studying in this Department would you like to promote to potential students?
Everything you need is in reach, and there even is a space (student committee meetings) to communicate if there is something you need that you can’t find. The workshop is available when you need to use it, there is a specific modelling workshop downstairs, there are computers, books, magazines. There is constant exchange among the students in the workshops, the library, the corridors. The whole environment both encourages and facilitates learning, if you allow yourself to be inspired by it.

What advice would you give to potential students thinking about studying at Strathclyde?
Go for it and don’t fear! University is a tough path but as I mentioned in the previous question, you will have all the support, from the infrastructure to the human resources, to learn as much as you are willing to. It is a major opportunity and it goes by fast, so I’d say: take advantage of the environment, ask as many questions as you need and make the best of it.

If you are in a position of reviewing candidates for the profession, do you think Strathclyde students offer anything unique?
My time in Strathclyde was short, and most of my contact with other students was either with my flatmates, classmates or in the student committee, which I was a part of. From this, and from what I could observe in corridors or the library, and also at the end of year exhibition, I find Strathclyde students very hard working and proactive, ambitious, interested and committed not only to their own studies and their future, but also to their institution.

What are your ambitions short/or long term?

I hope I’ll be taking my Parts 1 and 2 exams, which would homologate my Argentinian Architect degree. After that, Part 3 would follow, to become a fully qualified architect in the UK. And once that’s done, Conservation Accreditation maybe. That is, all going well, lots of work for the coming years. Exciting!

We're ranked No. 5 in the UK for Architecture- Complete University Guide 2019 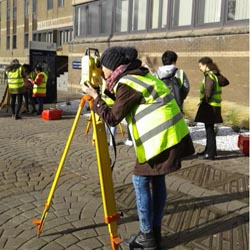 I work as a part of the company’s design team... I am allowed and encouraged to input my own opinions and ideas; in other words, to create

MSc Architectural Design for the Conservation of Built Heritage