Scotland leads the world on floating wind deployment but its lead relies on reinstating government support and retaining strong trade links with Europe after Brexit.

The UK’s offshore wind sector continues to smash records and defy predictions. The UK’s latest Contracts for Difference (CfD) allocation round saw prices fall as low as £45/MWh (2019 prices), comparable with this year’s expected wholesale price for electricity (WoodMac). This has drawn some to conclude that UK offshore wind is set to become cheaper than gas by 2023 (Carbon Brief). Globally too, the levelised cost of offshore wind has fallen 20% (IRENA) and capacity has rocketed from 3 GW to 24 GW since 2010 (IRENA). In short, offshore wind has gone mainstream.

The Paris Agreement on climate change commits its signatories to avoid dangerous climate change by limiting global warming to well below 2°C. The International Energy Agency’s (IEA) Paris Agreement compatible Sustainable Development Scenario sees offshore wind generating 606 TWh by 2030. In 2018 it generated just 66 TWh, meaning under this scenario generation would need to grow by a factor of 9 in just 12 years (IEA).

The role of floating wind

This is because a significant proportion of the world’s offshore wind resource is located in deeper, more remote waters. For instance, over 70% (123 GW) of Scotland’s offshore is in deep water (ScotGov), with a similar situation found in the USA, Japan and Europe.

The problem is that traditional bottom-fixed turbine foundations (e.g. monopiles) are not typically cost-effective in waters deeper than 60 m. Floating wind turbines present the key to unlocking this untapped resource.

What is floating wind?

The main difference between floating and conventional fixed foundations is that floating foundations are moored, rather than fixed, to the seabed. They broadly fall into three main groups (Figure 1): 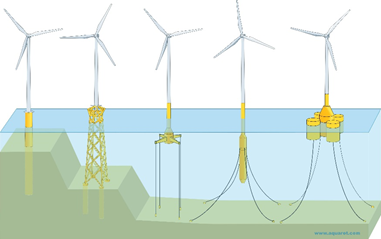 The major difference between these designs is the way in which they achieve static stability and keep the turbine upright. Each has its own relative strengths and weaknesses, such as their adaptability to different environments and ease of manufacturing or installation. There is no optimal design as such, with different designs suiting different circumstances.

The need for research

Today relatively little is known about the state of the floating wind market, especially how it has evolved and may evolve in the future. Questions remain about whether or not the market is growing, and if so where, how and why. To address these questions, our report examines 60 floating wind projects and two case studies of Scottish floating wind projects.

Market leaders – past, present and future

The floating wind market has grown steadily, expanding from almost zero installed capacity in 2008 to 57 MW in 2018. The UK is the world leader in floating wind deployment, with 56% (32 MW) of global capacity and Japan a close second with 37% (21 MW) (Figure 2). 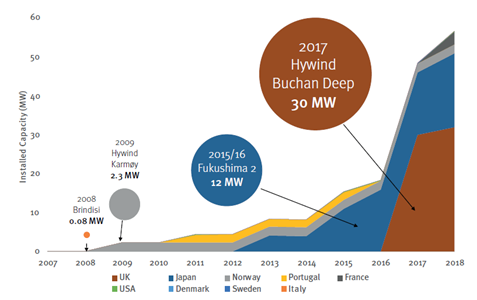 A different picture emerges if we consider which countries lead in the design and manufacture of floating foundations. Instead Norway leads with over half of the current installed capacity, with Japan again a close second.

Looking forward, there is an impressive pipeline of projects for future deployment. Only accounting for projects that have at least applied for consent, the global total installed capacity is expected to reach 268 MW by 2022 – almost five times that of today.

Examining the pipeline of projects that have yet to apply for consent, the UK faces fierce competition to retain its market lead, from the USA, Japan and France. Together they are planning almost 3.7 GW of floating wind deployment over the next 10 to 15 years (Figure 3). 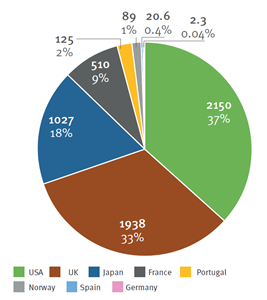 Figure 3: Installed capacity (MW) by nationality of deployment – only projects that have yet to apply for consent.

By 2030, we estimate that globally floating wind capacity could be as high as 4.3 GW, when accounting for the proportion of projects that typically do not progress from planning through to installation. This is roughly equivalent to half the UK’s current offshore wind capacity today.

Interestingly, we find that whilst small and medium-sized enterprises (SMEs) have played a central role in driving growth in the sector, multi-national companies are investing in floating wind too. These include:

Good examples include Equinor’s (formerly Statoil) 30 MW Hywind project off Scotland. Another is Principle Power’s 25 MW Windfloat Atlantic project in Portugal, which is currently under construction and is almost entirely owned by a combination of the oil and gas major Repsol and the European utilities Engie and EDP Renováveis. This points to a real appetite from ‘big business’ to leverage their capital reserves and expertise to scale up floating wind.

Floating wind technology is ‘scaling up’ and making strong progress towards commercialisation. Projects’ average turbine capacity has more than tripled between 2008–13 and 2013–18, whilst distance from shore has doubled to 11 km. Progress has however been slower in other areas. The vast majority of projects remain single-turbine demonstration projects, whilst average depth has remained roughly the same. Even so, at an average depth of 65 m, projects are already operating at depths most bottom-fixed foundations would struggle to do cost-effectively.

Despite its growing maturation, floating wind experimentation is still very much alive, with a focus on three main strands:

Today the UK and Scotland are world leaders in deployment of floating wind. With another 78 MW of projects that have at least applied for consent, and a further 1.9 GW at an earlier stage, it remains ambitious. However, this fragile lead hinges upon two factors: supply chain and innovation support.

The UK has no major floating foundation developers. Furthermore, the UK’s two flagship floating wind projects, Hywind Buchan Deep and Kincardine (Figure 4), have relied heavily on overseas firms to be delivered. Almost two thirds of the companies directly involved are non-UK headquartered and both are majority owned by overseas firms: a) Hywind by the Norwegian oil and gas company Equinor; b) and Kincardine by the Spanish OEM, ACS Group. This is representative of the broader situation across the UK’s offshore wind sector, where the majority of supply chain content is controlled by foreign companies (see BVG Associates and Whitmarsh).

Brexit therefore presents a material threat to UK deployment of floating wind, if its supply-chain is disrupted by new trade tariffs, customs checks and barriers to accessing skilled labour from Europe.

Such arrangements cut both-ways; simultaneously limiting UK project access to floating wind products/services from Europe and UK companies’ access to supplying a potentially huge European floating wind market. This could negatively impact upon the health of these companies and their capacity to help deliver floating wind projects back in the UK.

Floating wind is still pre-commercial, requiring subsidy to de-risk the technology and support delivery of the next generation of projects. However, the removal of the UK’s Renewables Obligation has created a gap for long-term support of pre-commercial floating wind projects. Developers are left with the Contracts for Difference (CFD) as the primary route to long-term subsidy but it favours cheaper, more mature technologies like bottom-fixed offshore wind.

This funding shortfall has in turn made the UK more reliant on EU innovation support programmes, such as Horizon 2020, the EU Innovation Fund and the European Investment Bank’s InnovFin. It is still unclear whether the UK will be able to access these schemes after Brexit. Neither is there any guarantee that any long-term shortfall in innovation funding would be covered by UK government and/or devolved administrations.

Our report highlights how the UK and Scotland must act now to safeguard their market lead. We make five recommendations to support growth of the UK’s floating wind market:

Implementing these recommendations could help the UK and Scotland to retain their lead of the floating wind market and bolster their chances of delivering a net-zero economy within the next 30 years.

The views expressed in these blog posts are those of the author and not necessarily those of the Centre for Energy Policy (CEP), University of Strathclyde.