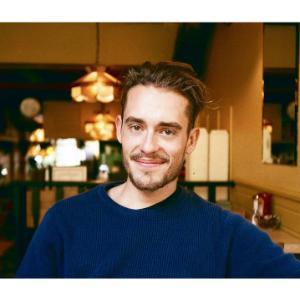 Tell us a bit about your background…
I am from Toronto, Canada and went to university there. I went to an Art & Design university called OCADU, it’s one of Canada’s most well-known art universities. During my time there I thought my art would sustain me, and it did for a little while but the art market is so competitive. I will always be an artist at heart, regardless of my career, and I think a primary teacher with a background in art is a pretty great combination.

What inspired you to become a teacher?
It’s difficult to say when I first thought teaching would be a suitable career for me but when I was young I always enjoyed explaining concepts to my friends and family. I was always asking questions, I wanted to know how everything worked and I’m sure it drove my parents and teachers mad. As mentioned before, I was a working artist for a number of years and was just looking for a change - a big one. I looked for overseas teaching jobs and found an incredible one in Japan. When I started my teaching there I knew immediately that this was it for me. I lived and worked there for a year, teaching all ages from pre-school to late primary. I couldn’t get enough of it! When I came back to Toronto I was scouted for an incredible job at a private, EAL high school. I wrote a syllabus for, and taught, a pre-university course. It was so fulfilling but there was something that was pulling me back to primary. So, here I am!

Did you have a favourite teacher when you were younger?
I got on with most of my teachers really well. During my primary years I had this one teacher, Mr. Fackelmann. He was just an incredible guy. He is probably my greatest inspiration in my own teaching. He was so kind but could also lay down the law when he needed to and you knew exactly what he expected from you and you just did it, no questions asked. He helped me through some really hard times at home and was just there for me whenever I needed him, and I know he was there for a number of my friends who were also going through tough times. We were all included, we were all respected, he liked everyone equally and he partook in everything we did. He never sat out and said ‘okay, you guys do this while I do work.’ He was always on the front line with us, running laps, solving equations and writing stories.

Why did you choose to come to Scotland to study?
After coming back from Japan I was still in ‘nomad mode’ and wanted to keep traveling. I think Scotland and Canada share a ton of similarities - people, for the most part, share a similar out look on life. It’s a wonderfully progressive country and the universities here are unrivaled.

Why did you select the University of Strathclyde?
The University of Strathclyde has a great relationship with the Ontario School Board and getting certified in Scotland also certifies me to teach in Canada. Their curriculum is nearly the same. One of the biggest draws for me was that I could do my degree in under a year here whereas in Canada a post-graduate degree in education is two years in nearly every university. I didn’t want to go back to school for another two years, I felt my career was already underway and so Strathclyde’s single year program was the only one that felt right to me.

Did you seek any support during the application process? Please tell us about this.
I was in contact with a number of recruiters from Strathclyde who really made the decision that much easier for me. They were so responsive and helpful and alleviated any of the stress I was having. As a foreign student, the online application process can be almost daunting enough to persuade you not to do it but with a bit of help from the recruits it became a lot less burdensome.

What has been the highlight of your time at Strathclyde so far?
That’s a bit tough to say. I want to say the people - sharing a classroom with so many likeminded people with same values is an undeniably amazing feeling. However, now that I am half way through my first placement, I want to say that these past few weeks have been the highlight. Being a guest in someone else’s classroom is pretty magical. You’re like a superstar making a cameo in a film. I feel so loved and respected by my students that the work just becomes a necessary thing that you do so you can spend more time in the classroom.

What would be your advice for people considering taking the PGDE course at Strathclyde?
Do it! There is quite literally nothing more rewarding than watching children grow and learn and have that sense of wonder that we all had at that age. However don’t do it if you think that teaching could be an easy gig to sustain you for a while. The majority of people who I’ve met here know that this is the thing for them. In order to be a good teacher I think you have to know that this is what you want because if you aren’t sure, your students will be even less sure. This is a career that comes with a fair amount of work, but like I said before - it’s worth it.

Have you had to overcome any challenges in your time here?
Honestly, not really. I was so ready for school that I sort of just jumped into it and have been firing on all cylinders since day one. Having already lived abroad once, in a place so incredibly different than what I’m used to, Scotland feels like home. The people in Glasgow are helpful and warm and have made the transition easy for me.

What do you think of the support available?
I love how much the lectures have talked about mental health and wellbeing. I think in this era, where mental health is such a commonly heard phrase, that it’s super important to make everyone aware of what is there for them. A lot of people tend to just shrug the term off as something that all university students will deal with and that’s that but at Strathclyde they brought it up on day one. It was like ‘okay, we know this is going to be stressful, you will all struggle a bit and that is okay. We are here for you and it’s okay to not be okay, just talk about.’ I really admired that.

What are your ambitions for the future?
To teach! I can’t wait to have my own class of youngsters again and get back in the driver’s seat. I want to be Mr. Fackelmann for so many children. I want to be the role model in role model-less lives. I want to help kids through the muck of life and show them how amazing school can be. My ambitious for the future are to help form an ambitious future generation.

Finally, what are the top 3 things you would advise far-travelled students to pack for coming to the UK?
Well I guess that depends on where you’re coming from but the obvious one would be Gore-Tex everything! So if that is my number one, my number two would be some form of E-Reader. Don’t lug books around, just download a bunch. You’ll be doing a ton of scholarly readings for PGDE and it’s so nice to just put those aside for a few hours and read something to take your mind off the dense texts. My number three, perhaps this is a bit cheesy, would be to bring a willingness to learn and to promote learning. None of us are fully-realized humans and never will be. I suppose this applies to any kind of travel, but especially if it’s for educational purposes, don’t take yourself too seriously. Be willing to have fun and to open yourself up. Your students will want to hear you sing and watch you dance and they won’t judge you for it, so just be cool about it and do the robot!