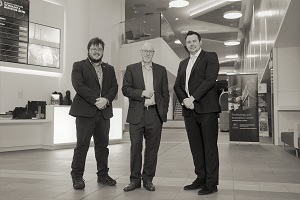 On the evening of Thursday 17th of October, the School of Psychological Sciences & Health held their inaugural Strathclyde Psychology Public Engagement Lecture in the TIC Main Auditorium supported by Strategic Themes, and in partnership with Waterstones.

The speaker for the event was bestselling, popular science author Richard Wiseman, the UK's only current Professor for the Public Understanding of Psychology. The event was attended by nearly 300 people, the majority of which were members of the general public. The talk received an incredibly positive response from the audience and nearly 100 of Richard's books were subsequently purchased and signed by the end of the evening.

Based on the positive response to this event, organiser Dr. David Robertson is hopeful that this can now become an annual event in the School of Psychological Sciences & Health's calendar.