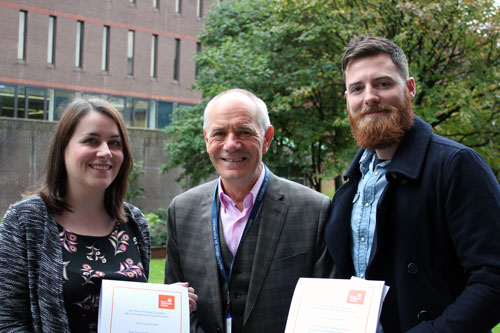 Professor Donald Christie, former Head of the School of Education, retired in July 2014.

Upon retiring, Professor Christie established a prize for the most outstanding first year community placement which aligns with the School’s aim of making a difference for the better in children’s lives.

The first winners of this prize are Sinead McEntee and Roddy Orr - congratulations!

Sinead spent her placement working with Crossreach's PND Bluebell Service. During her placement, she cared for the babies of parents with peri-natal depression.

Roddy worked with Loch Lomond and the Trossachs National Park Authority supporting their rangers as they worked with children from a range of schools within the park and in their own classrooms.

At the University of Strathclyde, all Year 1 Education students spend 70 hours on placement with children in any setting other than a mainstream primary classroom.

Since 2013, first year students at Strathclyde have committed more than 38,000 hours to the communities in which they have worked.