The University of Strathclyde played host to a two-day conference in July which sought to re-evaluate the French experience of the Second World War from an international and global perspective.

The conference - which was organised by Dr Rogelia Pastor-Castro and Dr Karine Varley in conjunction with the Global War Studies journal - brought together military, diplomatic, international and cultural historians, who tackled a wide variety of topics and approaches. These included covering the French colonial empire, including North and West Africa and Indochina, and the policies of allied and axis powers towards Vichy and the Free French. Delegates also focused on the interwar period, beginning in 1919.

The conference explored the lead-up to the outbreak of hostilities, including research on military cooperation between France and Czechoslovakia, the League of Nations and the factors behind the defeat of 1940.

Several speakers addressed the allied bombing of France, while other topics included prisoners of war, the persecution of the Jews and the economic history of the war.

There were some fascinating comparative analyses of occupation, including the Nazi occupation of Greece.

New approaches to the liberation of France

Professor Olivier Wieviorka of the Ecole Normale Supérieur de Cachan delivered the keynote lecture on the first day of the conference on new approaches to the liberation of France.

His lecture re-evaluated the role played by the French resistance and considered the exceptional nature of the speed of the liberation and the relatively low levels of casualties.

The plenary session on the second day of the conference began with Professor Talbot Imlay of Université Laval, who spoke about approaches to the German occupation of France and the need to construct a Franco-German transactional history. This was then followed by Professor Peter Jackson of the University of Glasgow, who addressed the neglected subject of the foreign policy of the Vichy government, emphasising the ideological dimension to the regime’s dealings with Germany and Italy as well as the allied powers.

Professor Martin Thomas of the University of Exeter responded to both speakers, suggesting that the occupation might be understood through a colonial framework.

The conference was attended by over 70 delegates. The assistance from the Society for Study of French History and the French Embassy in London helped to ensure that the conference brought together a wide variety of attendees, ranging from postgraduates and early career researchers to senior scholars, independent researchers, military staff and public historians.

Speakers came from over 14 countries, including:

The conference was a great success in bringing together a diverse and truly international group of speakers, prompting many fresh debates and new approaches seventy years on from the end of the war. Selected papers from the conference will be published in a special issue of Global War Studies.

Read more about the conference and its organisation.

Find out more about the keynote speakers

Talbot Imlay is Professor in History at Université Laval, Quebec. He has published widely on French preparations for the Second World War. His publications include:

He is currently writing a book entitled, The Practice of Socialist Internationalism: British, French and German Socialists and International Politics, 1918-1960.

Peter Jackson is Professor in Global Security at the University of Glasgow. His research interests lie in nineteenth and twentieth century international history and he has published widely on French foreign policy, intelligence and security.

Olivier Wieviorka﻿ is Professor in Contemporary History at Ecole Normale Supérieure de Cachan. He is a leading historian of France and the Second World War, and has published extensively on the Resistance, Vichy, the liberation and the memory of the war. 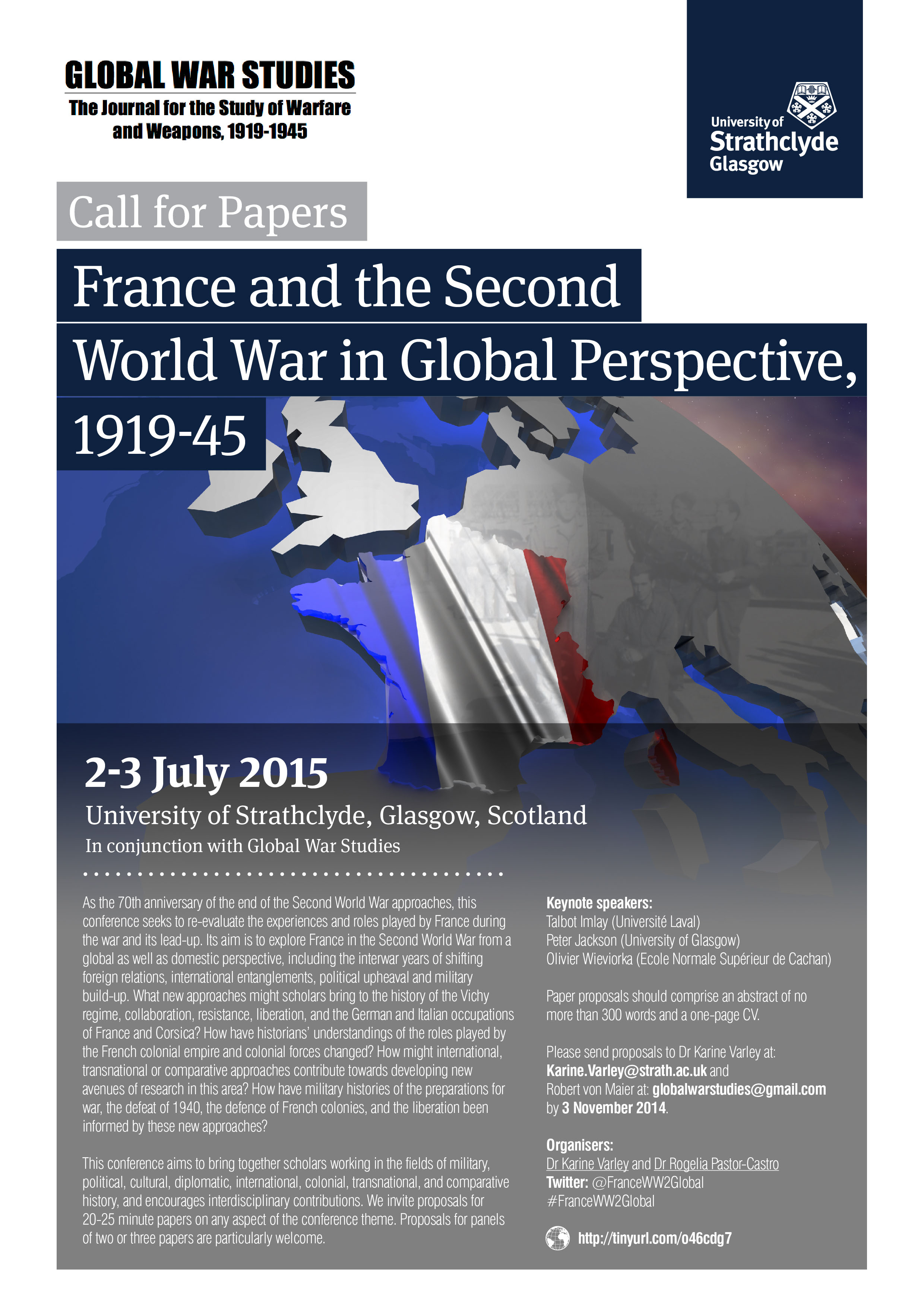