During the event, 26 teams involving over 50 pupils participated in a series of challenges which saw them test out their varying automotive inventions in front of a panel of judges which included 15 members of the AFRC’s engineering team.

The children, aged between 5 and 12, also enjoyed tours of the engineering facility and visits from the centre’s silver-suited furnace engineers as well as two sci-fi legends: a Stormtrooper and Chewbacca from Star Wars. 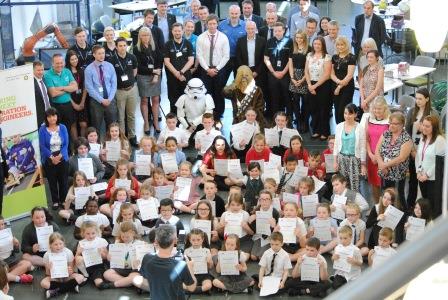 The successful event coincided with the AFRC’s board meeting meaning the young engineering hopefuls had the opportunity to meet and chat to senior industry professionals as well as the centre’s team of engineers and researchers.

As the event drew to a close Stephen Burgess, Manufacturing Process and Technology Director at Rolls-Royce and chair of the AFRC board presented the winners with awards.

The Renfrewshire schools’ Primary Engineer celebration event hosted by the AFRC was definitely one of the best yet. The interaction with the engineers was an incredible opportunity for the children made all the more relevant and exciting by being hosted in such an impressive engineering setting.

“This was an outstanding day where children’s engagement with engineering was celebrated in collaboration with the AFRC and we look forward to continuing to work with them to inspire future engineers in Renfrewshire schools.”