In a bid to inspire the next generation of engineers The Advanced Forming Research Centre (AFRC) together with Spirit AeroSystems held a competition to name three of the centre’s Kuka robots.

The competition involved school pupils from Kincaidston, Forehill and Doonfoot primary schools, all based in Ayrshire, a short distance from Spirit AeroSystem’s UK base. 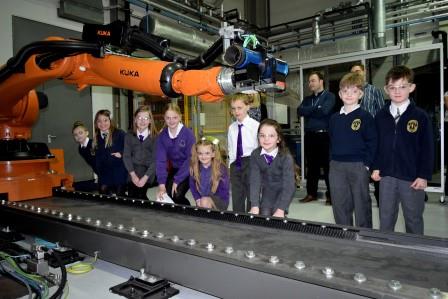 Each school was given a robot to name and the pupils had to submit their suggestions to their teachers and come to a decision amongst themselves.

The pupils chose the names: Robbie, Max and Lemmy and were invited to the AFRC to see the robots in action for themselves in the centre’s flexible automation cell.

Each robot now has a plaque with its name and the logo of the school that named it.

It was great to see so many young people get excited about the robots and learning how the robots fit into the world of engineering. It is important that as a sector we work together to inspire the next generation of industry leaders and innovation pioneers."