Circling the Globe in the Name of Education
Skip to content...

Lennard Miller is an undergraduate MPhys Physics with Advanced Research student, who has spent the last year studying abroad.  He shares his experiences and learnings from his internships in Hong Kong and Mexico and study abroad exchange in Canada.

One important reason for me to study at University of Strathclyde was its international outreach. I had been looking forward to a year abroad and other similar opportunities since the very start of my degree, so it was a no-brainer for me to apply for the international exchange programme when the portal opened. Soon after that I also walked past an IAESTE (International Association for the Exchange Students for Technical Experience) poster on campus, an organisation promoting summer internships all across the world. Neither there did I hesitate for long to send my application, and three weeks after I got an offer to work at the Department of Applied Mathematics of the Hong Kong Polytechnic University. My excitement for the summer was only enhanced when I found out I had also been admitted to study at the University of Toronto during the next academic year. My journey around the globe was about to start.

I remember arriving in Hong Kong, not being terribly excited. I had been to Asia before, and I was expecting a similar lifestyle and culture to what I had seen before. Boy, was I unprepared. When I first saw the city out of the bus window on my way into town from the airport, I knew the next two months would be like nothing I’ve experienced before. In between dark green hills, towered the skyscrapers of the Fragrant Harbour. Hong Kong really has everything. Amazing cuisine, a vibrant culture, bustling nightlife, hiking trails, beaches… I could go on for ages.

Of course, I wasn’t there only for holidays. Three days after my arrival I started working at the university, where I was introduced to my fellow co-interns, four people from Taiwan and one from Poland. I remember feeling a little out of place, as I was the only one who hadn’t finished his undergraduate. Also, I wasn’t actually a maths student, as all the other interns were. Quickly I realised that they were all very down to earth people and very happy to help me in case I needed it. My supervisors were also really friendly, and we found a suitable project where I could apply the maths and programming skills I had obtained during my prior education at Strathclyde. I ended up designing illustrations for a multivariate calculus course, a task I thoroughly enjoyed.

Outside of work I immediately found a great social atmosphere in the company of IAESTE students from other departments. We were all accommodated in the same student halls and spent most of our free time together, exploring the sights of the city and its surroundings. That’s where I found out Hong Kong actually has much more to offer than its concrete jungle! The trails in the hills can lead you to hidden bays, waterfalls and even tucked away temples.

After two months there it was time for me to leave. I was mostly sad to say goodbye to the close friends from all around the globe I had made but fortunately I had my next adventure waiting for me right after.

Welcome to the Great White. Coming from the tropical heat of Hong Kong to the speedily progressing autumn of Toronto was certainly one of the more unpleasant changes I had to deal with when arriving in Canada. After all, however, it was more than worth it. I arrived late at night, and the first thing I did was to take a walk around the St. George Campus of the University of Toronto. Shadowed by the skyscrapers of downtown Toronto, it is one of the oldest and most beautiful campuses in Canada.

As one of my professors from Strathclyde knew a professor, Joseph Thywissen, in the Physics Department of the University of Toronto, I had the opportunity to work in his Quantum Optics laboratory in addition to the courses I was taking. During my first semester I just volunteered to take up small tasks in the lab, but during the second semester I undertook an undergraduate research project. It was about building the laser network required for a magneto-optical atom trap. There I had the opportunity to have a look at what cutting-edge experimental physics research looks like, and I liked the room it left for creativity. Imagine being confronted with a problem and having access to some 20+ devices that you can use to analyse it.

Apart from studying and working in the lab I still tried to make the most of my weekends. Similar to what I had experienced in Hong Kong, the international student scene was very welcoming in Toronto. Immediately I found people to explore the countryside, as well as the city with. The national parks in Ontario really offer a splendid scenery, perfectly suited for hikes and canoeing trips. Moreover, the metropolitan life that Toronto offered enabled me to appreciate what it means to live in a big city. After all, where else can you go for a Chinese sit-in dinner at 3am in the morning?

After 8 months there, even though the city had so much left to be explored, I felt like I would appreciate some calmer surroundings again. Knowing that I had 4 months of summer break coming up, I had been eager to organise another internship. Having gone from Applied Mathematics to Experimental Physics, I started to appreciate the more applied side of my degree. Furthermore, I thought that working outdoors would be something that I would enjoy, which is how the idea of looking into Geophysics came up. Online, I found information about Colima Intercambio y Investigacion en Vulcanologia, a programme in Mexico where students could work on an active volcano. After contacting the professor, Nick Varley, I found that with my Physics background I would be able to contribute to the monitoring as well as work on my own project, while learning more about Geology and Volcanoes in the field. Therefore, I was thrilled to move to Mexico after the academic year in Canada came to an end.

Once more I had to go through a drastic change of climate, however this time I ended up on the more pleasant side. In Colima I was welcomed by 30 degrees Celsius and a friendly group of young geologists, with people from Europe as well as North and South America. Right on my first day they took me on an excursion to one of the nearby volcanoes, Volcan de Paricutin. After I told them I didn’t actually have any idea of how volcanoes work, they gave me a one-hour long introduction talk while we were horseback riding towards the volcano. Throughout the rest of the day I asked many more questions and the effort everybody put into answering them immediately made me feel welcome. There, I also realised that coming from a physics background to another field in natural science is a great experience for both parties. For example, I was able to contribute to their understanding of lava flows by going back to what I had learned about Thermodynamics or Fluid Dynamics.

I had also applied to a scholarship from the Carnegie Trust, and once I found out that it had been successful my project for the next 3 months was clear. I was going to work on chemical analysis and the numerical modelling of a pyroclastic density flow from 2015. Ever since I have been reading about its dynamics and I am mesmerised by its complexity. The approach in Geology really is fundamentally different as it is hard to build an isolated system in which you can study the governing laws independently. Therefore, statistics are much harder to apply than in Physics, and predictability becomes almost impossible. Nonetheless the people I am working with here grasp every straw of data to see if they can extract useful information out of it and I am inspired by their motivation and passion. Also, the fact that the volcano doesn’t obey such simple laws as I have previously dealt with makes it only more interesting to study.

Of course, everybody in the group also likes to see more of what Mexico has to offer apart from volcanoes. So far, we went surfing on the Pacific coast as well as visiting the town of Tequila (you guessed it, that’s where the famous spirit comes from), but there are many more exciting places around Colima we will want to explore in the following months.

After this summer, I will be back in Glasgow to finish my degree. Having seen the workplaces I have seen over the past year and talking with all my co-workers, I feel like I am much more comfortable to graduate than I was before I left Glasgow. Now I know that I would like to work in a field related to Earth Science where I can apply the skills I have obtained at Strathclyde as well as at the other places I have been.

If I can give a piece of advice to somebody who is looking to do similar things during their degree, then it would probably be that Google is your best friend. Yes, there are organisations such as IAESTE or Saltire that offer internships abroad on a competitive basis, however I feel like having to find and organise an internship yourself is a more enriching experience. Don’t be afraid to contact organisations even if you think you don’t perfectly fit their description of what an intern should be like. Initiative and originality are something that every research group or company is looking for, and sending them an application even if you’re not in their target group is the first step to show that you have those qualities. 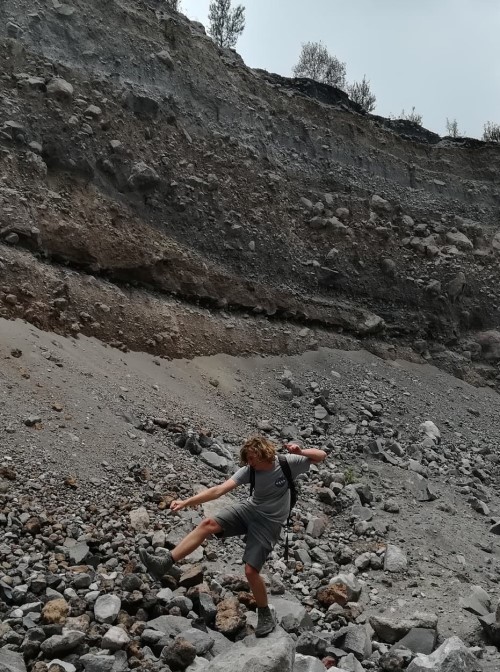 Learn more about studying Physics at the University of Strathclyde