Strathclyde Institute of Pharmacy and Biomedical Sciences PhD student, Emily Addington, blogs about her project, Dive for Antibiotics, which is a Microbiology Society funded project to discover new species of Actinobacteria and novel antibiotics with the help of UK divers.

Antibiotic resistance is a global crisis

At every talk I give about the Dive for Antibiotics project, I start with a question: “Show of hands. Who here has taken antibiotics before?”

Every hand in the room goes up, every time.

There are those that have been on minor antibiotics for simple things (if I’m talking to a bunch of divers, antibiotics for ear infections are pretty common) or more serious life-threatening conditions, such as sepsis. The fact is, we use antibiotics all the time and we rely on them working to keep us healthy.

So where to look to find new species of Actinobacteria and new antibiotics? There’s a huge argument for the ocean being a great place to look. Obviously, the ocean is huge and it’s also relatively under-sampled compared to terrestrial environments. That’s because to get the marine sediment which contains the Actinobacteria, particularly from large depths or underwater caves, you need experienced divers. This is where Dive for Antibiotics comes in.

The project was born out of an interest in isolating marine Actinobacteria and testing to see whether they produce antibiotic compounds that could kill things like MRSA. I started off by asking a friend who dived in Scotland to bring me back some sediment samples to isolate bacteria from – and was so surprised with how many I got! From there, I started to recruit volunteers from Facebook dive groups. It was great to see how many divers were interested, all were aware of the antibiotic resistance crisis and all were keen to send in samples from their dives.

The Dive for Antibiotics sampling competition

The idea came to host a competition for the project, to encourage divers from all around the UK to take part. I applied for a Microbiology Society outreach grant and was lucky enough to be awarded it. This meant I could fully fund the project, including buying media and supplies. A Dive for Antibiotics Facebook page, Twitter account and Instagram were set up, and we advertised the competition on social media. Halcyon Dive Systems, a company which specialises in diving equipment, were incredibly kind and donated a Halcyon Infinity System to be the first-place prize. It worked – we got a great response from UK divers wanting to take part.

The first step was to send out a ‘collection pack’ to divers, which included instructions on how to collect their sample, a sheet to fill out with information about where they had collected it, an information leaflet about antibiotics and Actinobacteria and a sample tube. Each sample tube was given a specific number so that experiments could be done fully blinded, without knowing who had collected the sample. The divers were also given a pre-paid envelope to send their sample back to the Strathclyde Institute of Pharmacy and Biomedical Sciences.

I got samples sent back from all around the UK, mostly Scotland, but Ireland and England as well. I isolated the bacteria from each of the samples and made sure to post photos and keep the divers updated on the progress of their sample. We had really great engagement from divers on Facebook and Instagram who were excited about their sample and the project. Eventually each diver was left with one single Actinobacteria of unknown genus and species which we carried forward and tested in “bioassays”. This is essentially a technique where you test to see if your Actinobacteria produces antibiotic compounds which can kill other nasty bacteria like MRSA and Pseudomonas.

Isolated bacteria which can kill both MRSA and Pseudomonas

We ended up with 5 Actinobacteria that produce antibiotic compounds capable of killing disease-causing bacteria. Four of these could kill MRSA – and two of these could kill both MRSA and Pseudomonas, which is really tricky to kill. Sequencing showed that we had three types of Streptomyces and one Micromonospora. However, further sequencing needs to be done to determine if these are brand-new, never before discovered species, and that will help us determine whether the antibiotics they’re producing are new or not.

We’ve now finished the competition and chose our winner – an Actinobacteria that’s great at killing both MRSA and Pseudomonas – but we’ll be carrying on with the Dive for Antibiotic projects and getting help from volunteer divers all around the UK. If you’re interested in following the project or taking part, please check us out on our social media! 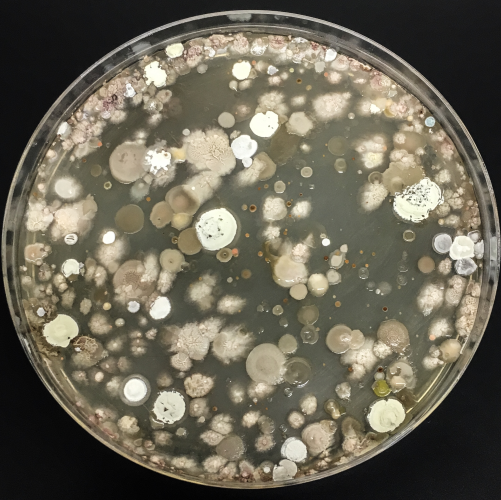 A plate of bacteria isolated from a marine sediment sample.

Learn more about studying a PhD at the University of Strathclyde 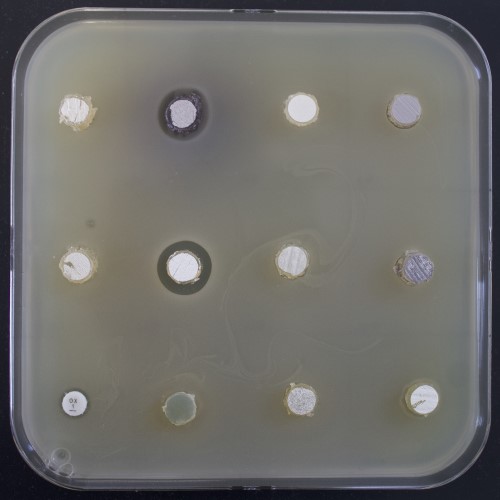 A bioassay with plugs of isolated Actinobacteria on a lawn of MRSA. Cleared circular areas show that the Actinobacteria is producing an antibiotic compound capable of killing MRSA.