Dr. Ina Lefering (Marine Optics and Remote Sensing Group, Department of Physics) participated in the last of three expeditions to the Arctic waters of the Barents Sea to collect optical data for Arctic PRIZE, a NERC-funded project investigating the effect of sea ice thinning and retreat on productivity in the Arctic Ocean. The project is led by colleagues from the Scottish Association of Marine Science in Oban and has partners from the Universities of Edinburgh, St Andrews and Oxford. The major modelling effort is being directed by Dr Neil Banas from the Department of Mathematics and Statistics, University of Strathclyde.

During earlier expeditions in January and April-May, the PRIZE team observed how the waters of the Barents Sea changed from very low algal biomass during the dark winter months to a thriving, highly productive ecosystem in spring. The aim of the final 4 week long expedition on the RRS James Clark Ross (JCR) was to collect data from the same locations during summer time - after the main peak in productivity had passed, looking at the impact on water column structure and the availability of nutrients to support further growth.

We joined the ship in Longyearbyen, Svalbard, and spent a beautiful day in the fjord setting up our gear. Having already spent a considerable amount of time at sea together, team PRIZE developed into a very efficient and productive science crew and everybody settled quickly into the sampling routine. In total, we collected water samples from various depths at over 60 different locations. Samples were analysed for nutrients, biogeochemical parameters such as dissolved and particulate organic carbon, chlorophyll concentration, optical properties and microplastics concentration and composition. The majority of these measurements involve filtering large amounts of seawater and on many days we found ourselves in the lab listening to the humming of the pumps until late at night.

In addition, 200 other science events took place including zooplankton fishing, sampling mud from the seafloor and the deployment and recovery of two moorings. These stationary observatories had been left in the water to collect oceanographic data for almost a year. We also successfully recovered the last of the gliders on our journey home. The yellow robot was scooped up with a gigantic net and safely heaved onto the back deck.

No food, no phytoplankton

The focus of the optics work was to measure the spectral absorption properties of water samples, resolving the absorption by phytoplankton, detritus and dissolved matter. Absorption affects how much light is available for photosynthesis and, hence, phytoplankton growth – the basis of the marine food web. We observed typical post-bloom conditions with overall lower phytoplankton and nutrient concentrations compared to the spring expedition.

This final expedition started only 5 weeks after the spring one had ended but it was striking how much the environment had changed. In spring, the most Northerly sampling site was located at 77˚ N because the sea ice was too thick to progress to higher latitudes. The summer of 2018 saw the lowest observed sea ice extent in the Barents Sea since 1981 stretching to about 82 ˚ N. We had to deviate from the initial route and sail further North to sample waters in the marginal ice zone. Sadly, this meant that we spent less time in ice than initially hoped and even though we saw their tracks, we did not see any polar bears or other wild life.

The light was also different. Even though the sun never sets in the Barents Sea in April-May, it reaches very low angles resulting in red glowing skies that last for many hours. This time, we celebrated mid-summer on board and the difference between night and day light conditions was barely noticeable. The fact that we operated in thick fog for almost two weeks, contributed to this effect.

After 4 weeks of intense field work (without any internet connection or phone signal), we welcomed the sight of the mountains of the Norwegian mainland, ready to travel home – with new exciting data in our bags. Ahead lie months of data processing, analysis and modelling that will allow us to gain insight into physical, chemical and biological processes in the hostile, yet so fragile, environment Arctic Ocean.﻿﻿ 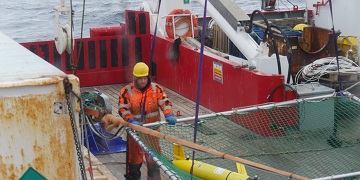 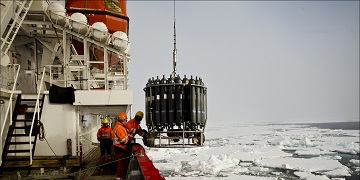 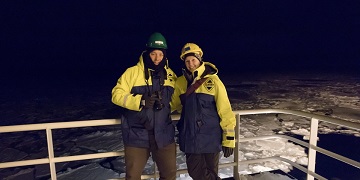 Searching for light in the Arctic Ocean in winter 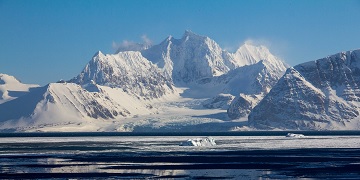 Going on a Bear Hunt in the Arctic & Fishing for Phytoplankton