Current Strathclyde Institute of Pharmacy and Biomedical Sciences PhD student Ben Veerman shares his experience of the Meet the Researcher Showcase event where he was able to share his knowledge and enthusiasm of Biomedical Sciences with over 200 secondary school pupils and an unexpected visitor.

Meet the Researchers Showcase Event 2019 was organised by Medical Research Scotland and hosted by Glasgow Science Centre and Dundee Science Centre. The aim of the event was to introduce ‘science’ to school pupils by giving them the chance to talk with researchers. Most of the exhibitors were presenting posters with their research, others had interactive games such as ‘kill the cancer’, where you had to throw balls and try to hit the cancer cells on a board. Our stand specifically promoted Strathclyde Institute of Pharmacy and Biomedical Sciences (SIPBS) and along with myself, Nooa Habeeb, Dr. Zahra Rattray, Dr. Felicity Lumb, Dr. Natalie Weir and Dr. Scott Davidson were all at the event representing SIPBS.

As I had only started my PhD two weeks before this event, it was more relevant for me to talk to the young people about my expertise in studying Biomedical Sciences and future career opportunities. Interestingly, many pupils were very keen to gain more information concerning the biological and medical aspects of science. I explained that the course covers many different subjects including microbiology, physiology, pharmacology, cell biology, anatomy and genetics and how this is related to science.

Parasites: Friends or Foes?, was the title of one of our banners. As Felicity is a specialist in parasitology, she could explain why parasites could also be friends. When you are infected by this type of parasite, it secretes anti-inflammatory proteins to hold off the immune system. These proteins could be used as a cure to treat diseases where the immune system is overly active, such as Rheumatoid arthritis. To visualize these parasites, more precisely A. vitae worms, she actually brought some over to the event, but do not worry, they were no longer alive.

As the event was almost at an end, some security guards appeared. Following behind the guards were two smartly dressed ladies. They joined the exhibition area as well, still not having a single clue what was going on, I asked my colleagues “Who are these people?”, “that’s Anne!”, they answered. Being a student from the Netherlands, I am not too familiar with the British Royal family but I realised a few moments later, that Princess Anne had travelled from London to visit the event. She took the time to have a chat with every exhibitor, including the SIPBS representatives! It was suggested that I didn’t show her the parasitic worms. As you might have guessed, yes I did show her the worms as soon we were talking about the therapeutic advantage of the parasites!

More information about Strathclyde Institute of Pharmacy and Biomedical Sciences 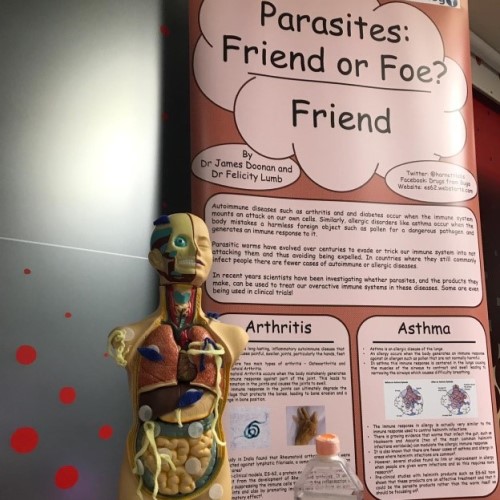