Immunology and Microbiology Undergraduate Catriona, shares her experience of summer placement at the Universidade do Porto

There is nothing better than leaving a wet and grey Edinburgh Airport knowing you’re going to land in sunny Portugal. Unfortunately, when my fellow exchange students and I landed it was overcast and very windy but not even disappointing weather dampened our nervous excitement. And while it didn’t take long for the sun to come out, we soon found the wind was destined to stay, reappearing in full force during every crossing of the stunning Douro River which ran through the city. While I miss the incredible view I saw every morning on the way to my placement I do not miss never remembering to tie up my hair before crossing that bridge!

Before our placements began, we had a few days to explore the city of Porto and while navigating the narrow streets and many, many hills we quickly found some of Portugal’s celebrated pastel de natas to sample which quickly became my go to after work treat. Getting slightly lost coincidentally led us to the lively riverside where there was a cool breeze and restaurants aplenty boasting fresh fish and port.

The Douro River led out to the sea which meant there were some beaches not far from the city centre which my flatmate and I decided would be the perfect way to relax after a long week working in the laboratory. Until we made our way out to Granja beach and found what felt like gale-force winds and freezing water (my supervisor later confirmed that nobody swam in the sea without a wetsuit). Nonetheless with the sun still shining we persevered and found a spot that sheltered us from the wind and saved our beach day!

The project I chose to work on involved continuing previous research that aimed to repurpose known anti-malarial compounds for use against the parasite Toxoplasma gondii. At first this project although interesting seemed very daunting to me so I was relieved when my supervisor showed me what I would be doing and recognised the main principle of the experiments, using assays to investigate the extent of cell death when exposed to varying concentrations of compounds, from a similar experiment I had done in my own laboratory classes in Strathclyde.

However, it wasn’t long before I was learning how to do things I would normally never get a chance to in a standard class at home including working in a sterile tissue culture hood, using an electronic microscope to see and take pictures of the morphology of cells, and being allowed to grow and maintain my own cell culture which I was able to use in my own experiments. As well as practical experience my supervisor also encouraged me to do my own literary research and write a report which not only gave me a deeper understanding of why the research I was doing was important but gave me practise writing a formal report which will be useful when writing up my final year project.

The first few weeks of my placement were spent mainly shadowing my supervisor as she worked in the laboratory showing me everything I would need to do in my own project (and so much more), I was able to take this time to ask any questions I had about what, how, or why I was supposed to be doing certain things and I found she was more than happy to take the time to ensure I knew exactly what I was supposed to be doing. When the time came to begin my own experiments, I felt confident and though I faced some setbacks over this time, I learnt to be decisive and trust in my own judgement more than I have ever had in my own laboratory classes before.

Most days I worked 9am to 5pm, Monday to Friday, in my laboratory carrying out experiments or analysing my results which gave me a genuine insight into what life as a research scientist could be like. I was exposed to different aspects of experimental research, including planning and amending experimental procedures, making sure I had access to the correct equipment and machines, and managing my time for both experimental and non-experimental work. I also got to see the feeling of community among my fellow researchers who were all so friendly and made long days more bearable with their good conversation.

I was only in Porto for 2 months but it was a busy summer for the city with lots of events taking place which threw us knee deep into the culture surrounding Porto. This included the UEFA Nations League Final which was held just outside of Porto and relayed on screens around the city centre. I watched the football match in a packed Square and Ronaldo led the Portuguese football team to victory. Getting to celebrate the win with the Portuguese was definitely a highlight.

I also managed to experience one of Porto’s biggest and well-known festivals Sao Joao. Sao Joao is traditionally a celebration of Saint John the Baptist and though I’ll admit my knowledge of the Saints is rusty, the last thing I was expecting, was to be hit with plastic squeaky hammers constantly throughout the day! I finally found out being hit on the head is supposed to be good luck and after I got my hands on a plastic hammer of my own, I can confirm it is as fun as it sounds. As well as an excuse to bop strangers on the head with a toy hammer, Sao Joao meant eating street food, including traditional sardines and watching a spectacular firework display over the Douro.

Studying abroad, would I recommend it?

I never expected I would be given an opportunity to study abroad and though it was certainly a dream come true it wasn’t all plain sailing. There were days where experiments weren’t giving me the results I’d hoped for, having to ask for help - which felt like constantly at the start of my placement, even having to redo entire weeks’ worth of work and of course feeling homesick.

However, despite all those things, I couldn't recommend a placement abroad more. I couldn’t recommend a placement abroad more. Not only was I able to greatly improve my academic and practical skills which will help me be a better student but I was able to meet new people and experience things, even more so than I thought I could in the time I was there. When the time came to eventually leave Porto, it really felt like I was leaving a second home. 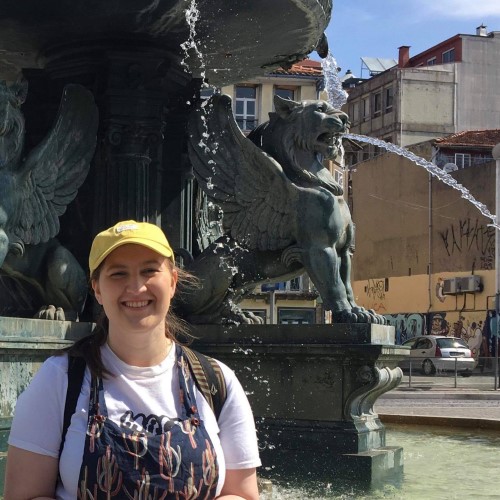