The estimation of when stable genetic markers known as single nucleotide polymorphisms (SNPs – pronounced ‘snips’) were formed in the Y-DNA of ancestral lines is of great importance to genetic genealogists, as they attempt to establish when different lines of descent were formed. This can allow Y-DNA test takers to discover which branch of a family or clan they descend from and thus greatly enhance their genealogical research. Statistically based calculations can provide estimates of dates of formation, but our research aims to reach conclusions founded on DNA and documentary evidence.

Newer sequencing tests such as Big Y-700 offered by Family Tree DNA, or whole genome sequencing (WGS) tests now offered by several companies, read some 14-23 million locations rather than just short tandem repeat (STR) markers. With such extensive sequencing, mutations that have occurred between generations can now be identified. A mutation on the Y-chromosome within the portions sequenced by the Big Y-700 is calculated to occur on average every 83 years, based on data from the YDNA Warehouse.

It is often the case that the number of generations within which a SNP must have been formed can be refined, as further tests reveal new positive and negative results, splitting up the blocks of SNPs at branching points, thus allowing what we have termed multi-generational SNP dating.

Moving beyond this stage, if certain strict criteria are met it is possible to identify SNP progenitors.

Present day test takers with well documented descents allow us to identify named people as SNP progenitors, individuals who lived in the past and in whom specific SNPs can be shown to have been formed. This can be done by evaluating test results from multiple surviving male lines of a family. 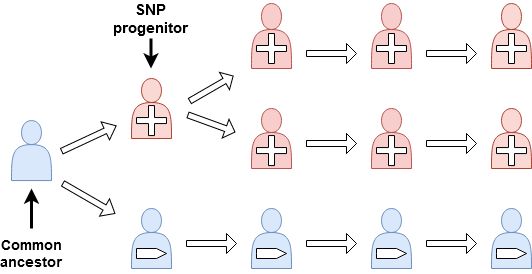 A SNP progenitor is an individual in whom a SNP was formed. This can be confirmed if tests on male line descendants of two or more of his sons are found to be positive for the SNP and tests of male line descendants of at least one of his brothers are found to be negative for the SNP. The first demonstrates that the SNP must have formed in the father of the two sons at the latest, while if a brother is negative for the SNP it could not have been formed in the proposed progenitor's own father.

Thus, if only one descendant line carries a particular SNP and the others do not, the founder of the line is known as the SNP progenitor. In other words, the SNP must have occurred in him and all his male descendants carry it, so belonging to his branch of the family or lineage.

A positive outcome of identifying SNP progenitors and the use of multi-generational SNP dating, is the possibility that this may improve and refine the statistically based model of SNP dating.

In the future, the discovery of SNPs that indicate branching, the more accurate dating of SNPs and the identification of SNP progenitors will benefit those whose genealogy halts due to lack of documentary evidence. Therefore, opportunity now exists to connect a brick walled lineage to a medieval genealogy beyond reasonable doubt.

This spreadsheet (linked below), provides our current data and conclusions on the likely time spans within which various SNPs were formed. A number of individual sheets for specific surnames detail the potential SNP progenitors for each SNP listed in the left hand column, along with information on which lines of descent have been DNA tested to provide the evidence for the conclusions. A SNPs sheet holds the data on the position of the SNPs on the Y chromosome, the mutation which identifies each SNP and the earliest and latest predicted dates of their formation.

Currently, very few certain SNP progenitors have been confirmed, but, once this number increases, our aim is to collect data on and make a list of SNP progenitors available linked from this webpage.

If you wish to submit data to be considered for inclusion on the Multi-generational SNP dates spreadsheet or the planned List of SNP progenitors please contact us on the e-mail addresses provided above.

Y-chromosome research is a fast-moving field due to the ongoing development of new technologies. The discovery of new SNPs may help further define branching and tree structure. Our research findings are as accurate as possible, but subject to future clarification and revision.

Further details of our research in this field can be found in the Declaration of Arbroath Family History Project : report available from the Foundation for Medieval Genealogy at https://fmg.ac/publications/arbroath-bg