Strathclyde is offering a new Masters course in Criminology & Social Policy, which provides extensive opportunities for engaging with research into criminalisation and its harmful consequences in national and global criminal justice systems. The impact of prison on the families of those serving sentences is one of the areas the new Masters will explore.

Justice, and its implementation, are among the most fundamental concepts underpinning any society but the impact of crime and criminal justice is felt across society as a whole. It is not, therefore, confined solely to those who are victims of crime, nor to those who commit those crimes.

The interface between criminal justice and social justice is at the heart of a new Masters course in Criminology and Social Policy at the University of Strathclyde. The course offers critical insight and understanding not only in these areas but also in a wider political, economic and social context.

Practical social science research methods will be taught, alongside key issues, theories and debates in criminology, social and penal policy and practice.

The course is being designed and delivered by an experienced, globally-recognised and award-winning criminal and social justice team, and expands the repertoire of critical, scholarly, policy and public engagement in their cluster at the School of Social Work & Social Policy.

It reflects the research, teaching and community work by a community of students and staff who are inspired by, and committed to, a criminological focus that aims to decentre criminal justice and refocus the lens towards social justice.

Here, we take a look at one aspect of the research which informs and complements the new course - the impact of prison on the families of prisoners.

The course is being designed and delivered by an experienced, globally-recognised and award-winning criminal and social justice team...

Dr Cara Jardine, Senior Lecturer in Social Work at Strathclyde, specialises in the effects of incarceration on the families of those who are serving sentences. Her research encompasses families’ experiences in their encounters with the justice system, notably prison staff, and the cost – financial, emotional and social – to these families.

Dr Jardine considers which relationships matter most to people who have been affected by imprisonment and demonstrates how family relationships are actively constructed and maintained through family ‘practices’ and displays such as visits, shared experiences and continuing family memories and traditions.

One project, which examined the experiences of a group of families with members in prison, is outlined in her most recent book, Families, Imprisonment and Legitimacy: The Costs of Custodial Penalties. 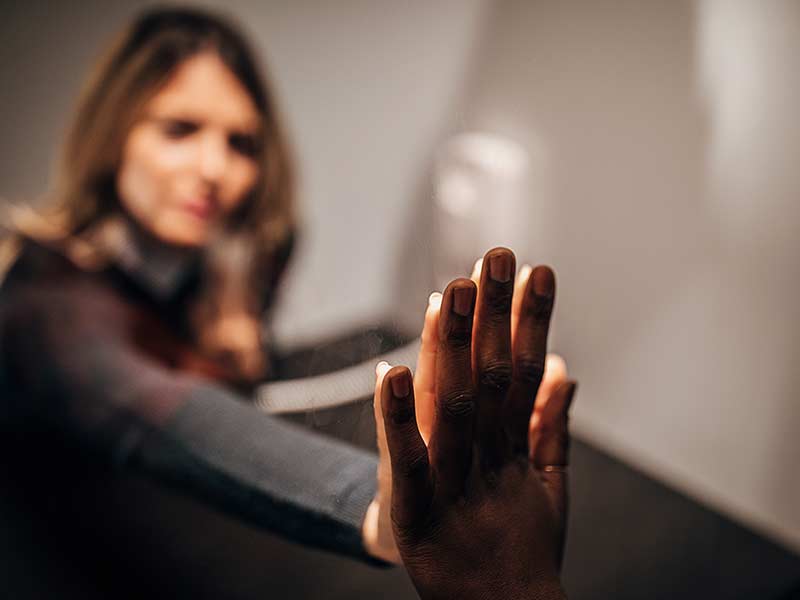 At a launch event for the book, Dr Jardine said her approach to the research involved an open definition of families and the principle that “family is what family does.” Many used a range of creative strategies to maintain a family spirit but the nature of their contact with prisons can increase what are often already considerable pressures.

She added: “Imprisonment entrenches financial poverty amongst families who are already experiencing it; supporting someone in custody is really expensive. It was money that these families just didn’t have to spare, in terms of travelling to prison, paying for phone calls, paying into PPC (prisoner’s personal cash).

“It uses a huge amount of time, money and emotional labour and it also entrenches the social aspects of marginalisation. It then limits the time they have for themselves, for work, for volunteering, for education, for taking part in school life or community life.”

Dr Jardine also explores in the book the contact between families and the criminal justice system, which she describes as “an exercise of penal power” affecting many aspects of everyday life. If the rules are applied inflexibly, she said, it can be frustrating for families and can have “potentially contradictory effects.”

“You perhaps see this most clearly when families are coming into adversarial or difficult interactions with prison staff and criminal justice professionals and very often this is because prison rules are really complicated and these staff are doing a really difficult job, and information is not clear and things are changing.

“These everyday interactions are really important even though they may seem unremarkable, because they give the families messages about how valued they are as citizens.”

Dr Jardine described the cases of some of the mothers and grandmothers she had spoken to in the course of her research. One mother - who was pregnant with her second child while her partner was on remand and gave birth after he was sentenced - was "lucky if she had 50p left at the end of the week," with increasing debts, the costs of telephone calls and payments into PPC. She had little support from her own family and did not feel safe in the area where she lived without her partner.

Another mother, of a grown-up adult son serving a long-term sentence, was struggling financially, as her son's income had previously been paid into household, and with her mental health. Her daughter was paying into her brother’s PPC "when she should be developing own life and having money for herself." However, the mother had good relationships with prison staff and felt her concerns about her son’s mental health were taken seriously.

A grandmother was caring for her granddaughter while her daughter and her daughter’s partner were serving sentences simultaneously. The grandmother gave up job her job so that her granddaughter would not be taken into care and found herself on benefits for the first time. She had little internet access, which presented problems for her with many services "moving to digital by default." However, she was paying rent and bills to keep her daughter’s tenancy going until she had served her short sentence.

Dr Jardine said: "Fostering feelings of mistrust or animosity towards the criminal justice system has implications beyond the eroding of social dispositions and the willingness of children and families to seek help from state institutions. A failure to achieve legitimate power relations can have damaging consequences in terms of how subordinate parties feel perceived, in terms of worth and status, by those in power.

"I’m not saying that this happens because criminal justice professionals do not do a really good job, or that they’re not really keen to welcome and support families; I also interviewed officers who were really keen to do that. What I’m saying is that this is an incredibly difficult job and it’s very hard to balance competing factors and when that doesn’t happen well, these everyday interactions become incredibly important."

Imprisonment can be damaging on a societal level in that it entrenches poverty and marginalisation and also to feelings of citizenship and that the justice system is on the side of these families. 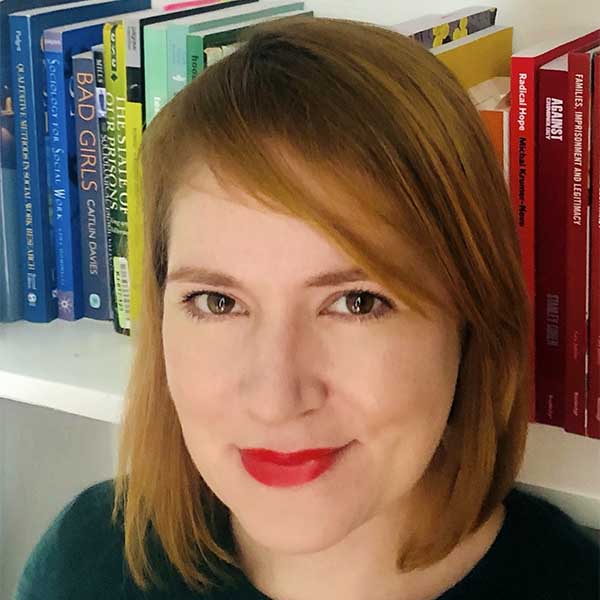 Fostering feelings of mistrust or animosity towards the criminal justice system has implications beyond the eroding of social dispositions and the willingness of children and families to seek help from state institutions. A failure to achieve legitimate power relations can have damaging consequences in terms of how subordinate parties feel perceived, in terms of worth and status, by those in power.

Prisoners face separation from their families during their sentences - but it can be felt just as acutely when another relative is in prison at the same time.

Dr Kirsty Deacon, Research Associate in the School of Social Work & Social Policy, has been researching how family relationships can be maintained when more than one member of a family, a parent or a sibling, has been jailed. She has also been investigating how policies on families and prisons have been implemented for different groups within the prison population.

Dr Deacon identifies a lack of clarity on the age classification of young people. For the purposes of her research, she defines the age group as lying between 11 and 25, although the UN defines ‘youth’ as those aged 13 - 24, while the World Health Organization defines young people as those aged 10 - 24 years. An estimated 20000-27000 children experience the imprisonment of a parent each year in Scotland but Dr Deacon has found that much of the family support is focused on young children and there is little provision for older young people.

She said: “Although young people can feel the same as younger children when a family member is imprisoned, such as feelings of loss, sadness or confusion, they can also have different experiences due to their age and developmental stage.

“With a growing understanding of where their family member is and the meaning society attaches to prison, there can be a greater fear of stigma - something which does not necessarily end on the person’s release.

“When they do visit, even in special children’s visits, often these are aimed at younger children – with a soft play area provided or toys only suitable for younger children.

“While special children’s visits are provided by prisons to help facilitate better contact, these are often provided only where children are under the age of 18 and visiting a parent or caregiver. Children who are visiting siblings are not always considered.”

Dr Deacon also assessed the effects of the simultaneous imprisonment of family members. This is a subject which is comparatively under-researched but she spoke to three young people who had experienced concurrent imprisonment with a parent and five with a sibling – four of whom were in the same Young Offenders’ Institution.

She said that, while institutions could see this as a risk or something to be managed, for the young people themselves it could be an opportunity to be supported or cared for in a potentially intimidating environment. However, there was no set provision for contact even between an imprisoned parent and child, with contact with a parent being seen as the right of the child rather than a privilege of the prisoner.

“Having to rely on inter-prison telephone calls and/or visits to maintain a family relationship can compound the difficulties around communication with someone in prison,” Dr Deacon said.

“We know little about these experiences and given the levels of intergenerational offending, and the fact that prisons tend to draw their population more heavily from certain geographic areas, this is something we must consider.”

Find out more about our MSc in Criminology & Social Policy or register your interest.