Students at the University of Strathclyde welcomed Scotland’s First Minister to campus today as she delivered a keynote speech ahead of COP26.

Launching the Scottish Government’s programme for the United Nations climate change conference, which opens in Glasgow this Sunday, Nicola Surgeon said that a Scottish Government Energy Strategy to be published next year will set out how the country can make the "fastest possible transition" away from oil and gas.

Speaking from the University’s Technology & Innovation Centre (TIC), ahead of the four-day, 140-nation Conference of Youth at Strathclyde which precedes the main conference, the First Minister said: "The necessity of accelerating the transition away from fossil fuels could not be clearer."

The Scottish Government will also publish a "catch-up plan" this week setting out what actions it aims to take after missing emissions reductions for three consecutive years.

Ms Sturgeon also referred to the ‘astonishing’ research that takes place in the TIC and said:

In a building like this one – with so much astonishing research work being carried out - it’s clear how many opportunities for both economic and environmental progress the transition to net zero can bring.”

The two week United Nations talks in Glasgow have been billed as the last best chance to limit global warming to 1.5C in the long term, and addressing an audience of young people and students, who represented future engineers, scientists, innovators, business and public sector leaders, and the First Minister said that Scotland can act as a ‘bridge builder’ between small and large nations at the summit.

She added: “We will do everything we can to support an outcome that will keep alive the imperative of limiting global warming to 1.5 degrees, and which also recognises the vital importance for climate justice. And we will use our position, as the host country, to create spaces and dialogues which encourage empathy, promote understanding and help people share perspectives.

“We will encourage national governments to match the ambition of cities, regions and state governments. We will help those around the negotiating table listen to activists in the developed world and from the global South. And we will work to ensure that leaders of my generation understand that our failure to act now will represent a betrayal of young people right around the world.” 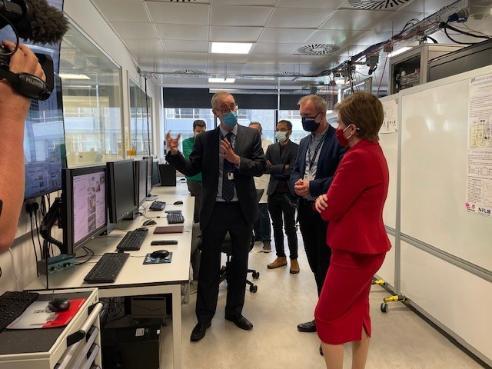 The First Minister also had a tour of the TIC laboratories, and met with Professors Stephen McArthur and Graeme Burt to learn more about their research work in the energy sector.

Welcoming the First Minister to campus, Dr Veena O’Halloran, University Secretary and Compliance Officer from the University of Strathclyde, said: “It is fitting that we are meeting here in the Technology and Innovation Centre – the heart of Glasgow City Innovation District. This is a place that was created to bring together business, industry, government and academia to accelerate the development of new technologies, innovate new ideas, and enable positive change.

“Like many universities, Strathclyde has been at the forefront of our understanding of the world around us and our academics have been contributing to sustainability for more than 130 years. Today, our academics are recognised in the research fields of energy innovation, energy policy and sustainable development, and as champions of the journey to net zero.

“But there is still much more to do. Climate change is the critical challenge of the 21st Century, and it will take a global effort from every sector to tackle it.”

More than 120 world leaders will attend the summit, which takes place at the Scottish Event Campus (SEC) in Glasgow from October 31 to November 12.

Strathclyde has observer status at the summit.