To mark limb loss limb difference month which is campaigning to end discrimination towards people with limb differences, Ali Spearing and Jim Ashworth-Beaumont have shared their own personal stories.

They are both graduates of the University’s dedicated Prosthetics and Orthotics degree course, one of only two such dedicated programmes in the UK.

Former Royal Engineer Lieutenant Ali lost both his legs above the knee when an improvised explosive device went off during his first tour of Afghanistan in 2011 while attempting to give three comrades first aid.

Ali underwent more than 30 operations before being discharged to rehabilitation, where further failed surgery was carried out to try and try and connect his stump with the prosthesis.

In 2015 Ali was fitted with two new robotic legs in Australia, after none other than Prince Harry lobbied for his revolutionary ‘osseointegration’ surgery to be approved by the British Army.

He said his operation, where an implant is inserted into an amputee’s residual limb which when integrated with the bone, allows connection between the stump and prosthesis, was a ‘big success.’ 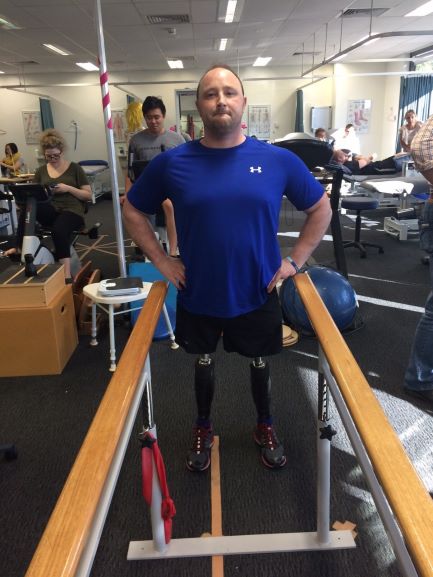 Ali, originally from St Fillan’s near Crieff, said: “I had a few months of rehab and I’ve not been in a wheelchair since. I put my legs on in the morning and that’s me all day.

“The advice I would give to anyone in a similar position is that it’s a big physical challenge but there are also mental challenges to overcome. People with a good mental attitude will do well.  There are days you don’t want to do it. In a way life is almost easier in a wheelchair, there’s a lot of hard work before life gets easier with a prosthetic limb.

“There will always be frustrations but it’s something you need to learn to live with.”

His experiences working with prosthetists in both Australia and Headley Court in the UK, a rehabilitation centre for injured soldiers, proved a pivotal moment in his life when he decided to head down a career path he had never previously considered.

Ali, who graduated from Strathclyde in 2020 with a First class Honours degree, said: “Watching the prosthetists work was a massive inspiration in deciding to do the course myself and apply to Strathclyde.

“If I hadn’t had my accident there’s no way this is what I would have ended up doing. I think that my own situation meant that while I was on placements people would respond well to me as there was no barrier between us. If I was asking an amputee to do something they didn’t have the excuse to say I didn’t know how hard it was!

“I can sympathise as I’ve been through it all and it helps me relate to them and vice versa. It’s a quick, easy way of building a bond.” 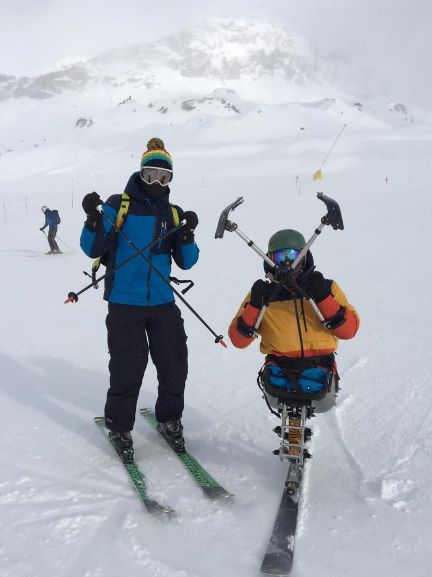 Formerly a keen mountain climber and runner before his accident, Ali says he now focuses on the things he can do and added: “Life is fantastic now. I worked in Ethiopia in a prosthetics department for six weeks a couple of years ago and I’m renovating a house on Tiree. I have a three-year-old with another baby on the way so I’m in a good place.

“There are loads of things I can’t do but I’ve taken up fishing and I go biking and kayaking.

“I haven’t decided what I want to do yet but would like to go down the charity route.”

In his spare time, he is collaborating on a shoe for children with club feet which can expand as they grow.

As an NHS prosthetist/orthotist, alumnus Jim Ashworth-Beaumont spent more than two decades helping patients with the most complex spinal, orthopaedic and neurological conditions at London’s world-renowned Royal National Orthopaedic Hospital. But after a horrific cycling accident last July in which he was dragged 100 yards along the road by an articulated lorry, Jim lost his right arm above the elbow.

The former Marine, who graduated from Strathclyde in 2000 with a First Class Honours degree, was rushed to hospital by air ambulance. Doctors warned his wife Keri that his other devastating injuries meant he may not survive.

As well as losing his arm above the elbow, his liver was so damaged that 80 per cent of it had to be removed. Jim also suffered multi-organ failure and sepsis and was in an induced coma at King’s College Hospital, for five weeks following the accident.

But the inspirational dad-of-two, who is also a running coach, trainer, mentor and athlete, is staging a remarkable recovery. By last Christmas, medics, who said he was one of the most complex surviving case they’d seen, deemed him fit enough to return home and he has regained the ability to walk. 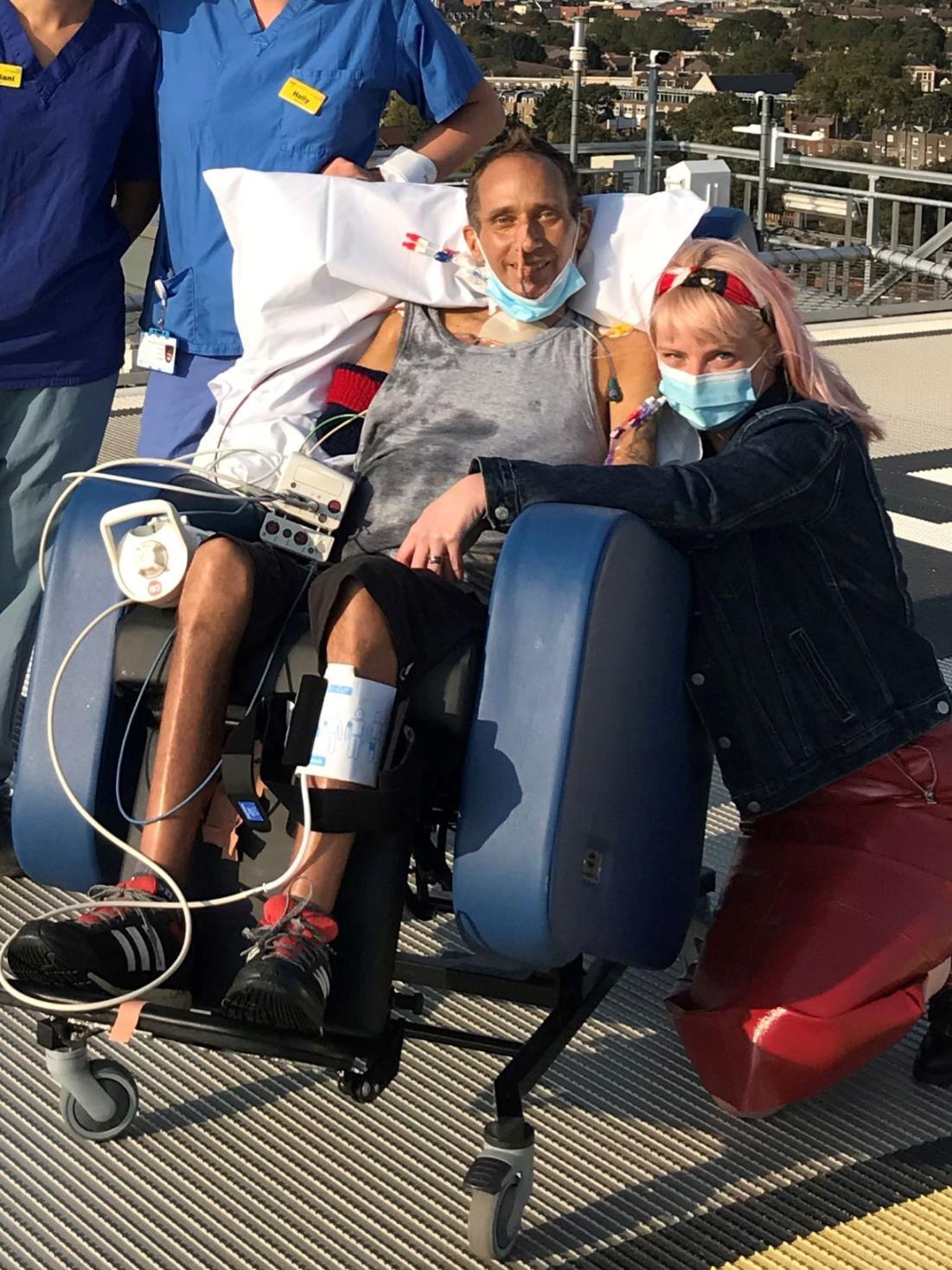 Earlier this year the prosthetic expert returned to work in a non-clinical capacity and the super fit amateur runner plans to take part in his first race next month.

Jim says that his accident has given him a new perspective on the situation of the patients he has dedicated his professional life to helping.

He said: “There are lots of positives to come from my experience, and one of those is a greater insight. As a clinician you tend to see people for one specific thing, but there’s a lot more to it.

“It’s made me realise how difficult it is to be a patient.”

As well as his physical injuries, the accident left Jim suffering with post-traumatic stress disorder and body image issues.

Jim, who grew up in Edinburgh, said: “Earlier on in my recovery I was more conscious about my body image, as I lost a third of my body weight and I’ve got lots of scars on my face and the front of my body.

“To a certain extent I was a little bit worried about what people would think of my arm but with the help of colleagues and friends taking me out and perhaps me pushing things a bit by running about in a little vest top, I found that people don’t care.

“It can actually be a real ice breaker. I’ve had some great conversations with people in the supermarket who are staring and I’ve made eye contact with. Children will often ask questions about my missing arm.

“I’ve worked with patients with spinal injuries all the way up to elite athletes and as an ex-serviceman, motivation and the drive to do things is entirely in your own mind. Whatever bodily deficits you experience don’t matter, that’s my outlook. Hopefully people see my level of ability or disability irrelevant.”

Jim was partly inspired to train in P&O by his cousin, former Rangers owner David Murray, who lost both his legs after a car accident in 1976 when he was just 23.

He said: “It happened when I was quite young and it was a big shock for our family but that early exposure probably helped normalise amputation to me and raised my awareness.” 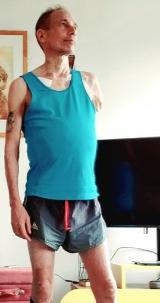 Jim says he was ‘overwhelmed’ with kindness after his accident as the tight knit P&O community rallied round to help, including many former Strathclyde classmates.

His ultimate goal is to be able to fully return to treating patients and he is now fundraising to become one the first people in the UK to be fitted with a revolutionary bionic limb developed by specialists in Sweden.

He added: “There are ironies all the way down the line – I’m a prosthetist who’s lost his arm and at the time I was working for the NHS in critical care looking after Covid patients, and two weeks later I’m in a critical care ward myself.

“But my background means I also know the limitations of the technology and what’s possible and I’m driven to go as far and do as much as I can.”

Roy Bowers, the director of the Strathclyde undergraduate P&O programme, said: “Often personal experience – perhaps a family member who has lost a limb – prompts interest in the course.

“We have a long history of P&O at Strathclyde and have graduates all over world.

“I think the impact of our graduates is really significant at home and abroad. International graduates return home to establish clinical services and pass on their skills in countries where they’re sometimes not so well developed.

“We also have many UK graduates who have gone to different parts of the world to work. Some are involved in P&O education, and Strathclyde has quite a reach.”

One former graduate, Carson Harte, is the Chief Executive of Exceed Worldwide, formerly known as the Cambodia Trust, a UK based charity set up in 1989 to provide prosthetic services for landmine survivors in Cambodia. It has since set up five training schools across Asia.

Such is the practical nature of the undergraduate course, that P&O students have been among the few permitted on campus in the past year - with social distancing measures and full PPE in place - for clinical sessions involving physical contact.

Roy Bowers added: “Obviously we’ve been unable to have the usual volunteer patients, so we sourced urethane models of amputation limbs, with a 3d printed ‘skeleton’ inside, so students can practice techniques without patients.”

Commonwealth Distance Learning Scholarships awarded to the Department of Biomedical Engineering also  provide a unique opportunity for people working in prosthetics, orthotics and rehabilitation in low to middle income Commonwealth countries to upgrade their qualifications to Masters level.

Quantum encryption scheme to be tested on satellite