A PhD student at the University of Strathclyde has won a UK-wide award for his research into the information practices of DJs in choosing their music and communicating with their audience.

Keith Munro, of Strathclyde’s Department of Computer and Information Sciences, has been named as the 2021 winner of the ET Bryant Memorial Prize, presented by IAML (UK & Irl) (the UK & Ireland Branch of the International Association of Music Libraries, Archives and Documentation Centres).

In his submission, Keith explored the questions of whether DJing can be considered a profound activity, how DJs relate to the concept of serious leisure, how they search for music information to meet their creative needs and whether they use the human body, through senses and physical responses, as a source of information.

He interviewed a group of DJs for their perspectives on their craft, as well as drawing on his own experiences as a DJ and working in record shops. His focus in the research was on creative DJs performing in clubs and public places, as opposed to broadcasting. 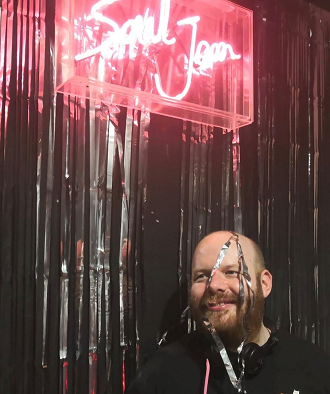 Keith received his award of a cash prize of £300 and a certificate during IAML’s annual general meeting on Tuesday 13 April.

He said: “It’s great personally to receive this award but I think the best thing about it is representing the views of the participants and the culture of DJing more broadly. This culture isn’t necessarily the same as mainstream perceptions of DJing and hopefully the research shines a light on a side of DJing that is creative, independently minded and can make space for marginalised groups in society.

“One of the biggest things for a DJ is audience reaction; it directly informs their creative process. You don’t necessarily expect people to give the same reaction to a wide range of music but there is feedback that DJs look to get; they’re constantly observing a crowd, looking for microexpressions, and, when it goes well, it’s exhilarating and a source of profound joy, for the DJ and for the crowd, although it can be deflating when it doesn’t.

“This type of embodied information is a key to how a DJ performs. It’s a communal experience and there’s also a lot of instinct and intuition involved in choosing the music. There’s a planning and decision-making process in performance, in putting together different genres and styles, based on the flow of the crowd.

“In my interviews, I also found that DJs have a fluid relationship to the concept of serious leisure. They can be considered as a type of ‘occupational devotee’, for whom the line between work and leisure is so blurred that what is easier to define is a deep-rooted commitment to the activity. DJing was the main source of employment for some of those I interviewed, for others it was not, but it offers experiences, both to the DJ and the people they play to, that are elevated above their day-to-day existence.”

Keith is the second consecutive Strathclyde winner of the ET Bryant Memorial Prize. He follows another student, Kirsty Morgan, who received the award in 2019.

The prize was established in memory of Eric ‘Bill’ Bryant, who died in 1990. He made a significant contribution to the music library profession through his published works, including Music Librarianship and Collecting Gramophone Records And Music — A Reader's Guide; these works have influenced many librarians over the years.