Winter Olympic curling medallists Claire Hamilton and Michael Goodfellow were awarded the 2014 Alumni of the Year Award. Both were team members of the squads that won medals for Team GB at the 2014 Games in Sochi, Russia. 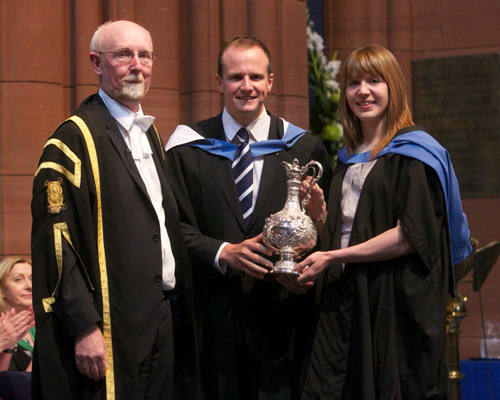 The pair were jointly nominated for the award for the impact they have had in inspiring and helping Scots be more physically active, and returned to the University to receive their award during a graduation ceremony at Strathclyde's Barony Hall on the 3rd July 2014. The award was presented by Professor Kenny Miller, Vice-Principal.

As well as applauding their sporting achievements to date, acclaim was given to them both for their acknowledgement of their responsibility toward shaping the future of sport and physical activity in Scotland; from grassroots through to high performance clubs, sharing their talents with others across the country.

'To be an Olympic medallist is outstanding'

Brian Green, Vice-Dean Planning in Strathclyde’s Faculty of Humanities & Social Sciences, delivered the oration as Michael and Claire were presented with their award. He said:

Michael and Claire have both enjoyed a number of successes alongside their Olympic medals. Michael won silver at the 2011 and 2012 World Championships. He now plans to continue with full-time curling and to aim towards competing at the next Winter Olympics, in Pyeongchang, South Korea, in 2018. Claire claimed gold in the 2013 World Championship and 2011 European Championship, as well as European silver in 2012 and has taken a year out from the sport to complete a Masters degree in Sport and Exercise.

Whilst at the University of Strathclyde, Michael graduated in History and Claire gained a degree in Pharmacy.

Winning such a prestigious award the same year that Glasgow has hosted the Commonwealth Games feels very special. There have been so many worthy winners in previous years of the Alumni of the Year, across a number of different fields, so to be included amongst them is a huge honour for us."

As well as committing a lot of time and effort to curling, we both felt strongly that our education was worth equally as important. Thankfully, Strathclyde was extremely supportive and understanding right from the beginning, before we had any of the medals to show for it, and aided our journey to achieving our goals in sport, as well as our studies."