Guan Kiat Goh is president of the alumni group, University of Strathclyde Alumni in Singapore (USAS) and received the award for his exceptional work in strengthening the University’s alumni community in Singapore.

His expert leadership helped USAS to win Alumni Group of the Year 2014/15 and achieve excellent results from student recruitment and enterprise efforts.

Guan Kiat is also a founding member and committee Chairman of the Strathclyde Business School Learning Expeditions and Cultural Exchanges programme. Guan Kiat gained an MBA from Strathclyde in 2012 and has since established an active Strathclyde alumni group in Singapore, organising a range of successful recruitment events and a series of networking visits to China.

Following his graduation from Strathclyde, Guan Kiat formed a committee of 10 alumni volunteers in Singapore and helped the University re-engage with alumni with whom it had lost touch. 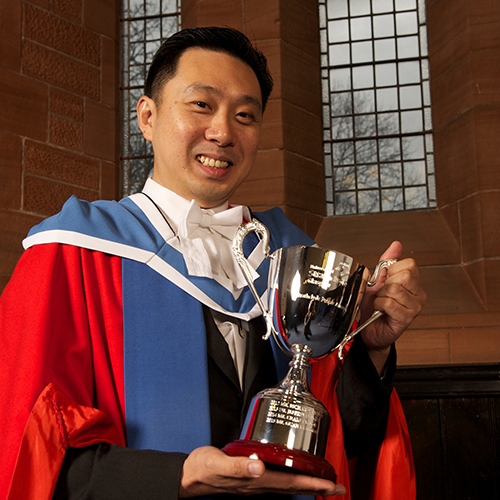 He was appointed President of the group in 2013 and it has since held a range of well-attended events, regularly attracting between 70 and 100 alumni, some of which were jointly held with Strathclyde’s MBA centre in Singapore.

He was presented with the award at graduation on Thursday 12 November 2015 by the Vice-Principal Professor Scott MacGregor. The oration was delivered by Professor David Hillier, Executive Dean of Strathclyde Business School.

Mr Goh said: "When I was graduating from Strathclyde, I knew the importance of an alumni association.  When I found out that there wasn’t any in my country, I stepped forward and volunteered to set one up.

"We reached out to the alumni, organised activities and held talks for the community. We engaged, we told others about the existence of the Singapore’s chapter, and we stand proud as Strathclyde alumni.

Spreading the word of Strathclyde

Professor David Hillier, Dean of Strathclyde Business School, presented Mr Goh for the award. He said: "Through his activities, Guan Kiat has amply demonstrated his commitment to the continued success of his alma mater.

"The importance of alumni volunteers such as Guan Kiat cannot be overstated; we look to them to help spread the word about Strathclyde around the world. As an international university, we look for new recruits with the ability to study wherever they may be in the world; we are proud to have a student population drawn from more than 100 countries and Guan Kiat is one of the reasons we have this enviable record." 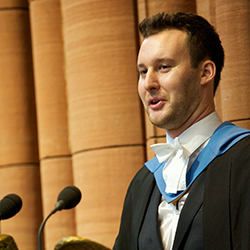 In helping Strathclyde be even more successful it creates a halo effect on all of those that have graduated from the University and the value of their degree.