A device for controlling outbreaks of dengue fever

A device developed in a project involving the University of Strathclyde could solve the centuries-old problem of bringing dengue fever under control.

Dengue, commonly known as dengue fever, makes headlines relatively rarely, compared with other mosquito-borne diseases such as malaria and zika, but its impact is no less acute.

Dengue affects 125 countries around the world, spread across most continents, and is endemic in the majority of them. While most cases – more than 80% – are mild and often asymptomatic, it can cause a potentially fatal illness, similar to acute influenza.

According to the World Health Organization there are up to 400 million dengue infections and thousands of deaths attributable to the virus each year. In 2019, a record total of 5.2 million cases occurred – a tenfold increase since the start of the millennium – and although the presence of dengue is widespread, some 70% of cases are concentrated in Asia, most notably in the Philippines, Bangladesh, Vietnam and Malaysia.

It is in Malaysia, which recorded more than 300,000 dengue cases resulting in nearly 800 deaths between 2014 and 2016, that the University of Strathclyde has been playing a part in a project aimed at controlling the spread of the virus at its source – the mosquito.

Strathclyde’s role in the project began when One Team Networks Sdn Bhd, a company based in the Malaysian state of Selangor, advertised its interest in working with a UK partner to help develop a mosquito trap it was in the process of designing.

Professor David Greenhalgh, of Strathclyde’s Department of Mathematics & Statistics, was the University’s lead on the project. He said: “The product had been tested and used in a trial, but the company was looking to develop it into something larger-scale.

There are precautions which can be taken to control the spread of dengue, such as not letting stagnant water – where mosquitoes lay eggs – accumulate in plantpots or in rubbish bins, but the disease remains a huge problem.

We worked on a project funded by the British Council to help develop an effective solution. One solution often used is ‘chemical fogging,’ which is a form of outdoor space spraying, but it doesn’t reach its most effective point until one month after spraying has taken place and its effect reduces over time. An alternative is also needed which is better for the environment.

"We used a large plastic device which has oviposition-towel or OVITO, replacing the sticky or glue paper used in previous versions of the device, on one side of the inside. It also contains a bottle of a low-toxic insecticide liquid formulation which is released into the device and attracts female mosquitoes. If a mosquito comes into, and lays its eggs in, the device, the chemicals will stop the eggs developing.

"The female mosquitoes also contaminate themselves with the solution, which they then transfer to nearby hidden breeding sites.” 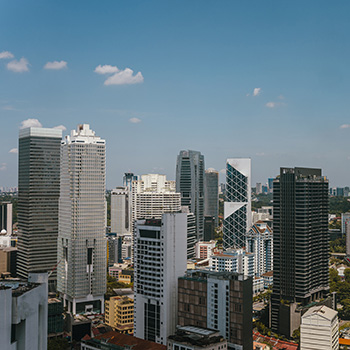 In one trial analysed by Strathclyde, more than 550 of the devices, which have since been named the AedesTech Mosquito Home System (AMHS), were installed in three blocks of flats in Malaysia’s capital, Kuala Lumpur.

Professor Greenhalgh and his colleagues used mathematical modelling to estimate the initial growth rate of the dengue epidemic which enabled them to estimate the total number of mosquitoes around the flats and the potential number of breeding sites for Aedes mosquitoes - the foremost carriers of the dengue virus. In this research, the number of dengue cases was reduced by 75% from 53 in 2013 to 13 in 2014.

In a later trial in which Strathclyde was involved, the devices were used in 18 blocks of shop houses in Section 15 of Shah Alam, Malaysia. This is a more challenging environment as the human population density is less than in the high rise flats.

Professor Greenhalgh and colleagues looked at the impact of the AMHSs on dengue in the flats under various assumptions and modelled the potential impact of more widespread use of the AMHSs on dengue in Malaysia. They looked at conditions for the AMHS to eradicate dengue in Malaysia; for example, if 40% of Malaysia can be covered by AMHSs then the models predict that extinction will be possible provided that the AMHSs are able to reduce the Aedes population by 34.9%.

One Team Networks Sdn Bhd has been promoting mosquito control methods though visits to schools in Malaysia and has provided AMHS units to a school free of charge. Word is also spreading about the devices beyond Malaysia, with expressions of interest from Singapore, Sri Lanka, Thailand, Mauritius and Indonesia.

The success of the AMHS, and Strathclyde’s role in it, demonstrate the vast importance of mathematics in underpinning the solutions to global challenges in which the University specialises, through the mathematical applications which are found throughout both the natural world and fields of technology.