To the untrained eye it may simply look like a humble shipping container, but to the residents of the remote Malawian village of Mthembanji, the contents have been life changing.

Inside the 20-foot receptacle delivered to the village in June 2020, were the components of a 12-kilowatt solar-powered microgrid – enough to provide 60 homes and small businesses with a supply of electricity for the first time.

Since the Southern African country’s first smart-metred, solar-powered microgrid was installed in the rural village in the Dedza township south of Malawi’s capital Lilongwe, the effects have been remarkable. 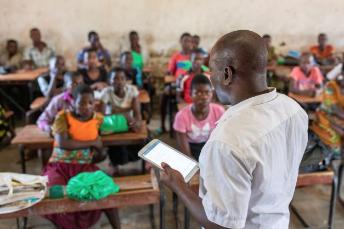 The village was one of the many areas not connected to Malawi’s national grid. Now, the Scottish Government-funded microgrid project, co-ordinated by the University of Strathclyde in partnership with United Purpose, allows electricity to be offered to the local Ntandamula Primary School at a discounted rate. This means that evening classes can be held, enabling children to catch up on the education they missed during COVID-19.

After the installation, in a single year there was a more than fivefold increase in local primary pupils progressing to high school – rising from just seven out of 44 to 38 out of 47 learners in 2020.

Before the arrival of the microgrid the only option was to work by torchlight, but now children can study at home after nightfall. The school has also since been able to introduce iPads in partnership with the Turing Trust.

Parent Matilda Chagontha is just one of the members of the community who says that the lights being switched on has been ‘life-changing’.

The mother-of-five said: “Before the microgrid we only had one torch and we had to share between the kitchen and for the children to use to study.

“It was really hard for the children to do well at school. Sometimes it was a decision to buy batteries for the torch or food for the children. But my life changed when the electricity arrived because it’s used for lighting in the house.

“My children can now study and the outside bulb protects us from thieves. And the children are doing so well at school because they are able to study."

New businesses have also sprung up as a result of electricity provision, including video shows, grocery shops with fridges, computer cafés, cold soft drinks, salons and barbershops – a total of 20 to date. All businesses have reported an increase in income, suggesting local economic development.

Dalitso Bizweck is one of the customers at Mthembanji. Before the microgrid he closed his small grocery shop early due to inadequate lighting. After getting a connection, he extended the power to his shop and was able to keep his business open longer. He has also intends to rent out a chain of seven shops which he has built in front of his compound and to which he has extended power.

Dalitso said: “Since the coming of electricity, I have benefited so much both financially and socially.
"Some of the money I saved has been used to construct some new shops and I tapped the electricity from the house to the shops. The shops are rented out to people. I will also be buying a refrigerator very soon and I will use it to sell cold drinks in my shop.

“Security has increased at our house because of the security lights. Socially the life for my family has improved because we now watch the TV any time we want to, which is different from before the microgrid when we had limited time to watch TV using solar home system.”

The project is part of the Rural Energy Access through Decentralisation and Social Enterprise (EASE) project which focuses on marginalised rural communities in Dedza and Balaka Districts and addresses complex energy challenges through a community-centred approach. 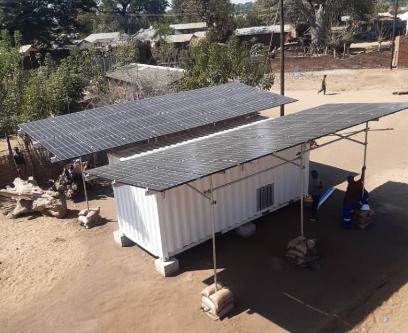 At present, Malawi’s National Grid only reaches 12% of the population. The issue is even worse in rural areas, with only three percent of the 85% living in these areas having access to electricity. The project is supporting the Government of Malawi to achieve their 2030 target of sustainable energy for all.

The arrival of the microgrid was followed by training and capacity building initiatives, opportunities for local income generation and livelihood improvements at household level. The fact that it can be monitored remotely from anywhere in the world, has allowed Strathclyde researchers to gather economic data on energy use - vital for informing energy policy and business models for future microgrids.

Valuable data is also being gathered on social impact, with initial findings showing further positive changes to community livelihoods and increased security in the village.

According to the surveys conducted, the microgrid is also having positive gender impacts, with women reporting positive impacts on amount of free time, independence and decision making, respect within the community and household, and security in the home. Access to news and health information has also improved.

Aran Eales, Researcher Associate in Electronic and Electrical Engineering at Strathclyde, said: “Around 16 million people don’t have access to electricity in Malawi, and solar microgrids like those installed through EASE offer life changing impact through reliable power to communities living in energy poverty.

“The technology is low carbon, climate resilient and scalable, and the research we do ensures it is deployed in a way that’s affordable for communities through a sustainable business model that ensures the lights are kept on.

We’re trying to demonstrate the art of the possible.”

The microgrid is managed through a social enterprise and community engagement ensures the service is affordable and designed for customer needs, as well as adhering to Malawi’s electricity supply regulatory requirements.

A second solar microgrid has also now been installed in Kudembe village as part of EASE. It is powered by solar PV and provides reliable electricity to 50 customers - around 250 people - who were previously unconnected.

This system was locally manufactured and installed by Malawian contractors instead of being imported from South Africa or Europe as is more common. 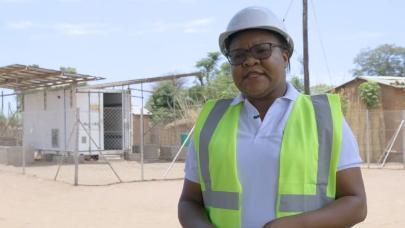 EASE Project Manager Elizabeth Banda from United Purpose, one of the few Malawian women working in the off-grid renewable energy sector, said: “In rural communities if you don’t have reliable access to light in the evening, people are forced to cook early, to go to bed early so it reduces their time of productivity.

"For businesses they have to close early because they don’t have access to reliable lighting sources.

Electricity is important because it acts as an enabler. It improves the quality of life at domestic level and it also brings a lot of opportunities for local income generation in the community.”

A video captures the positive changes.

Professor Sir Jim McDonald, Principal & Vice-Chancellor of the University of Strathclyde, said: “This project highlights the pioneering and innovative engineering work underway at Strathclyde to address energy poverty across the globe and to support access to clean, affordable and sustainable energy for those who need it.

“This solar microgrid deployment shows the impact of technology in supporting a just transition to a decarbonised future.”

Scottish government International Development Minister Neil Gray said: “Through our Malawi Development Programme, the Scottish Government has a longstanding relationship with the University of Strathclyde and I’m delighted that the solar microgrid project in the Malawian village of Mthembanji is such a success.

“Having access to electricity has been transformative for the small businesses in the village and especially the children who are progressing much faster through the education system now they have light to study in the evenings.”

Ibrahim Matola, Malawi Minister of Energy, said: “The EASE project lays a great foundation for the United Nation's Sustainable Development Goal number seven, which calls for ‘affordable, reliable, sustainable and modern energy for all’ by 2030.

“These microgrids connect people quickly and at low cost while we as a government are working on larger initiatives that could take time to accomplish. They are used not only for lighting but also for other commercial endeavours like welding and barbershops and entertainment.”

Through EASE, staff at Community Energy Malawi have also been piloting District Energy Officers (DEOs), raising awareness around renewable energy with rural communities and building capacity for mainstreaming energy in local development planning. The eventual aim is to be able to roll out DEOs in all districts.

A solar PV energy hub and solar powered irrigation has also been installed in Nakatale, in the Bakala District, offering refrigeration for farmers to store produce and other productive uses of energy, enabling increased incomes and economic development for rural farmers and businesses.