Feature
How maths could help to save the kittiwake

The black-legged kittiwake is the world’s most commonly-found species of gull – but it has still seen a dramatic decline in its numbers in the UK. Why is this happening – and can it be reversed? Maths researchers at Strathclyde are looking for answers.

The black-legged kittiwake – Rissa tridactyla, to give it its scientific name - was thriving in the UK until the mid to late 1980s. The numbers of the species stood at just over half a million on the population measure of apparently-occupied nests (AON). This was up by nearly a quarter from the turn of the 1970s, when Operation Seafarer conducted a census of the UK’s seabirds.

By the dawn of the new millennium, the growth had been reversed and the UK population had plummeted, with a recent estimate pointing to a decline of 65% since 1986. This is reflected globally and the worldwide decline has been so steep that, in 2018, the kittiwake was placed on the IUCN (International Union for Conservation of Species) Red List of Threatened Species.

With more than 20 major kittiwake colonies, and dozens of smaller ones, around the British Isles, the largest concentration is found in Scotland’s Northern Isles of Orkney and Shetland, as well as along its the east coast, and their location is determined to a considerable extent by the prevalence of food. The kittiwake’s main prey is the sandeel, a small fish no more than 12 inches in length, but it faces competition for this food from other predators, including birds such as puffins, and fish such as cod, haddock and mackerel, as well as seals.

Sandeels have also been extensively fished in European waters, not least the North Sea, and after UK’s withdrawal from the EU – and, by extension, its Common Fisheries Policy – the future of the entire North Sea fishery is up for renegotiation. 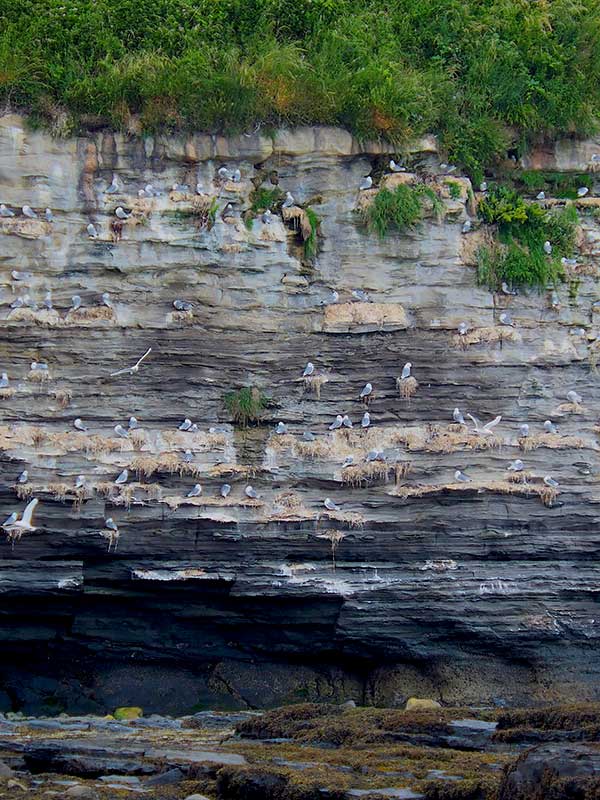 But not even a long-standing closure of the sandeel fishery off the east coast of Scotland and the north of England has brought about a recovery in the kittiwake population, likely as a result of low breeding success. Building on a study completed around 15 years ago, mathematicians at the University of Strathclyde, together with collaborators at the University of Glasgow and Marine Scotland Science, have explored how the breeding success of kittiwakes varies over time and how it may be responding to its environment –  particularly the species it relies on for food.

Agnes Olin, a PhD student in Strathclyde’s Department of Mathematics & Statistics, is lead author of the study, which has been published in the journal Marine Ecology Progress Series.

“We also saw that the breeding success in colonies close to each other seemed to fluctuate in unison, so that if one colony is having a bad year, the neighbouring colony was also likely to have a bad year. What was interesting was that these groups of colonies showing synchronous breeding success seemed to belong to separate sub-populations of their sandeel prey.

We also saw that the breeding success in colonies close to each other seemed to fluctuate in unison, so that if one colony is having a bad year, the neighbouring colony was also likely to have a bad year.

The finding that kittiwakes seemed to be responding to changes in their local sandeel population aligns with previous research showing that sandeels play a large role in the breeding success of kittiwakes and other seabirds.

“Our work shows the spatial scale at which we need to understand what is happening with the sandeels. Previous research has shown that several sandeel sub-populations have shown declines in both size and abundance, and the next step is to try to understand the causes of these declines further.

“Sandeels seem to have been negatively impacted by the changing climate, so we need to understand what will happen to the sandeels as the climate continues to change, and what this means for the kittiwakes.”