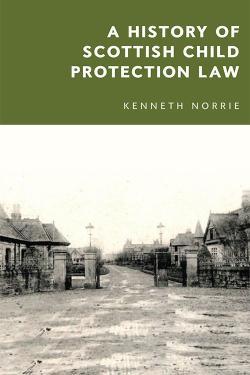 Building upon the work that I did for the Scottish Child Abuse Inquiry into the experiences of children who had suffered while in the care of persons or bodies other than their parents, I have spent the last several years on historical research and Edinburgh University Press has now published my History of Scottish Child Protection Law.

The book seeks to explore the policy choices that were made at various points in the development of child protection law in Scotland, and to contextualise these choices within world-wide trends.  It traces, in a way that has never been done before, the development of child protection law in Scotland from its earliest manifestations, growing out of the “old poor law”, to the present day, with the primary aim of enhancing not only our understanding of how our contemporary processes operate, but why they do so in the way that they do.  The study of history is not only about understanding the past but also about informing the choices we make for the future.

Political structures and priorities change with the temper of the times, but the need of any child for a safe and secure childhood as a prerequisite for a contented and fulfilled adulthood remains a constant.  However the longevity of the philosophy upon which the Scottish approach to child protection is based proved a surprise.  The conceptualisation of child-offending as a failure in appropriate parenting rather than as a sign of punishment-deserving wickedness has been a central feature for far longer than we tend to realise today.  The creation of the children’s hearing as a wholly new tribunal in 1968, served to hide the continuities in the legal processes activated by child neglect and abuse: personnel and structures may on the surface be different but the processes that children’s hearings follow were established long before the hearing system itself, as were the grounds for its jurisdiction.  What has changed, but only very recently, is how the placements in which child protection is provided are regulated, as we as a society have become much more conscious of – or, perhaps, less willing to ignore – the dangers that children face when placed in institutional care.

Some social attitudes have of course changed radically, and with them the legal rules that they reflect.  Our willingness to accept corporal punishment of children has all but evaporated.  And we are in today’s post-Imperial world horrified at our earlier practice of forced emigration to the colonies as a “solution” to the problem of children in need.  Perhaps most noticeably, attitudes towards the role of parents once children have been removed from their care has transformed.  Until the 1960s the prevailing approach was to see the child protection process as a means of insulating children from bad parental influences, and there was very little provision made for children to keep contact with their parents and no provision at all for working with the parents to ease the child’s eventual return to their care.  Today, parental contact is protected in its own right and is rightly perceived in all but the most egregious cases of bad parenting as a means of enhancing the child’s welfare.

The sources that I accessed for the book include not only the primary legal materials  and the published studies of historians but also the parliamentary debates on the various Acts passed by Westminster, and latterly Holyrood, from the Prevention of Cruelty to, and Protection of, Children Act, 1889 to the Children (Equal Protection from Assault) (Scotland) Act 2019.  Not only do these debates help us to understand the objectives of the legislation, but they illuminate as few other sources can the political attitudes and social circumstances of the day.  From the fear of leaving children in front of open grates to the provisions allowing boys at residential schools to work in foundries, from the Admiral MP deprecating how few boys from industrial schools were sent to sea to the first SNP MP worrying that the new children’s panels would be composed of amateur “do-gooders”, these debates provide fascinating snapshots of the attitudes, and experiences, of our law-makers in a by-gone age.  These debates also illuminate how much the world changed in the middle decades of the 20th Century.  It is hard to believe that only 42 years separated the contributions to the debates on the Adoption Bill 1926 of that wounded survivor of Gallipoli, Major Attlee, and the contributions to the debates on the Social Work (Scotland) Bill 1968 of the man who later became Scotland’s first post-Devolution First Minister, Donald Dewar.  Case law too serves to reveal social circumstances at particular points in time, and from the law reports referred to in the book we can read about the flea-ridden Stranraer Reformatory at the turn of the 20th Century, and about the post-war mother seeking to retrieve her child from care by offering to provide him with a house that had an indoor lavatory.

Historical work always throws up facts that have little to do with the subject-matter at hand but which are arresting in their own right.  One of the commentaries I relied upon quite heavily was the eponymous textbook The Children and Young Persons (Scotland) Act, 1932 by M.G. Cowan, which had sat on my bookshelf for many long years, being afforded little more than the occasional cursory glance.  But for this project I took it down and read it from cover to cover, only then realising from Lord Sands’ preface, when he referred to the author as “Miss Cowan”, that it had been written by a woman.  I know of no earlier legal textbook with a female author, certainly not in Scotland.  This was Minna Galbraith Cowan, an educational pioneer well-known in her day as the author of The Education of Women in India (1912).

A (non-academic) friend of mine asked me some months ago as I was putting the finishing touches to my book – “but how many people will read it?” and he laughed derisively when I replied, “I don’t think that matters”.  But what does matter is that I have rescued from obscurity information less and less accessible to a general researcher.  I was struck by the amount of material that I had to access but which was not electronically accessible.  I had to use Current Law, which few legal scholars younger than 40 will have heard of as a tool (it’s a sort of paper Westlaw).  Historical publications are never the end of the story: they are stepping stones to the future, and I hope that, even if the book mostly sits on library shelves, policy-makers in the future will learn from it what worked in the past and what didn’t, which elements of our system are worth retaining and which are time-limited.  But it is, for all that, a good read.  Even my cynical friend now thinks so.