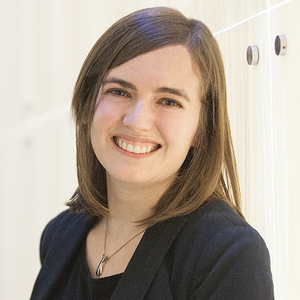 Dr Angela Daly recently started with us as a senior lecturer within the School of Law. As well as her role as a lecturer, we also spoke to Angela about becoming the new director for the fully online Masters degree on Internet Law & Policy/IT & Telecoms Law.

What is your role within the school?
I'm a senior lecturer here at Strathclyde Law School, but I have a variety of different responsibilities outside of this role. I am the new director of the research centre on Internet Law & Policy, as well as the director for the fully online Masters degree on Internet Law & Policy/IT & Telecoms Law. The Centre has been in existence for quite some time, but it has gone quite quiet, so my plan this year is to reinvigorate it, be much broader with the research interests within this centre, and most importantly, remind people that the centre is still here. I'm also a member of SCALEs, the new Competition Law Centre, which Barry Rodger has been setting up.

Tell us a little bit about your career so far.
I am originally from Glasgow, but I've been living outside of Scotland for the last fifteen years and out of the United Kingdom for the last ten years, so I'm coming back here after being away for quite a long time. I started out my career working for the British telecom regulator, Ofcom, in regulatory policy for a couple of years after I finished my Masters degree. I worked there at a really interesting time because they were trying to grapple with how best to deal with the internet. I had always wanted to do a PhD and my time at Ofcom made me realise that I had enough material to know that I wanted to do my PhD on internet regulation. I completed my PhD at the European University Institute in Italy, which included a period at Stanford University in the United States as a visitor in 2012. Following this, I ended up getting a post-doc job in Australia at Melbourne's Swinburne University and stayed there in Australia for almost six years, which was not part of the initial plan. From Swinburne, I took a research fellowship at Brisbane's Queensland University of Technology  in the Faculty of Law. In that time, I was continuing to work on internet regulation but I also started to look at other new digital technology such as 3D printing and a little bit on renewable energy as these became hot topics during this time. My partner got a job working in China, so I ended up moving to Hong Kong for work just before joining Strathclyde. I've been fortunate enough to travel the world with work, but it was while we were there that we decided we wanted to move back to Europe. I had specifically wanted to move back to Scotland for some time, so when this role came up it felt like the perfect opportunity to touch base again.

What has been the most memorable moment of your career so far?
I suppose in terms of career highlights, living and working in Asia is something I never expected to happen. When I worked in Brisbane and Hong Kong, I was doing a project on 3D printing which was funded by the UK Intellectual Property Office and I did field work for that project with people working in the 3D printing industry to try and understand whether they perceived there to be big threats to their intellectual property or were they actually infringing the intellectual property of others. My main highlight from my time spent there was doing a workshop with a group of people from the 3D printing industry in Shenzhen, which is this big, crazy, technologically advanced city in China. As someone who was pretty much a European lawyer doing something very different from traditional legal research alongside a group of Chinese people who were technology experts in this field, it did make me really nervous, but I walked away from the experience realising how challenging an experience it had been, but ultimately a very rewarding one.

Upon leaving Hong Kong, I was also involved in organising an event on the governance of artificial intelligence that was attended by some very prominent figures within the world of politics and technology in Hong Kong, notably Charles Mok (who represents the IT Functional Constituency in the Hong Kong Legislative Council and has been very vocal in supporting the current pro-democracy protestors in Hong Kong) and Stephen Wong (the Hong Kong Privacy Commissioner for Personal Data). I describe this as a highlight as I had only been in Hong Kong for less than a year and I had organised this event with these very eminent people from different stakeholder groups, despite starting that year not knowing many people in Hong Kong at all. Working in academia, there can be a lot of opportunities afforded to you and if you want to take them, it can lead you to many places. Living and working in Asia was something I never expected to happen and I guess I was seizing as many opportunities as I possibly could.

What sparked your interest in Law?
When I was at school, I wasn't really sure what I wanted to do. I had done well in my exams and the breadth that Law offered really interested me. It's something today that I am still enjoying. When I look at the students I've taught and see what they do after graduating, it's always exciting to see the different fields of work that people go into after completing a Law degree. I think the grounding that Law gives you and the different opportunities and areas you can go into are really good. Other subjects may either have a very specific path that students follow once completing the degree or the exact opposite, but I think in Law there are a lot of different things you can do. Completing my degree meant I could explore these options and it has enabled me to work in a variety of different areas including communications, technology, and law and policy.

What current trends do you see influencing your field?
We're now noticing a trend where transnational aspects have become very important, so you tend not to get Internet Lawyers dealing with just one jurisdiction. This involves looking beyond just Europe and the United States, as younger markets with growing economies are now influencing greater changes and a shift is starting to emerge. For example, the video sharing app TikTok is one of the most influential apps on the market at the moment and it has been exported around the world from China. Previously, it was applications from Europe and the United States dominating these markets, but now we have developments in places like the Asia Pacific region and these are becoming increasingly important in the field of communications and technology. I think because the markets are shifting demographically that will influence the field as well, meaning we won't just be able to look at the European Union or the United States. We have to have a bit more of a global understanding.

From a teaching perspective, it's about understanding that not all students are going to follow a traditional path into Law after completing their degree. There's a lot of shifts in the profession and what Law students are aiming for afterwards. They're not all necessarily going to go into law firms. This shift is also evident within the course, as there are many people teaching on Law courses now who have not came from that traditional background. I have never qualified as a lawyer, so I often find students asking me questions about how can they get into the tech industry after completing their degree. There are careers like Regulatory Compliance Officers and Data Protection Officers that are now really integral parts of many organisations that may not have been so prominent in the past, but both technology and business changes are bringing these about which leads to these alternative career paths for Law graduates. It's all about being aware of these changes and bringing these insights to students to show all the possibilities available to them after graduating.

Tell us about any research you are currently involved in.
Recently, I've been doing a lot of work around artificial intelligence and the governance and ethics initiatives that have been coming out of some countries. It's a very new and popular topic at the moment, but what I'm hoping to bring that's a bit more different is what is happening in China and India. Some of the last work I did in Hong Kong before coming to Strathclyde was a public event that I hosted as part of a bigger workshop regarding the concerns surrounding unethical artificial intelligence. We've seen recent court cases in the UK regarding the police using facial recognition technology in public places that have been deemed lawful, but the debate continues over how ethical this is. There are big questions around whether artificial intelligence is being used legally and ethically and that's what I'm focusing a lot of my work around at the moment.

What initially attracted you to the University of Strathclyde?
I think the applied, real world focus that Strathclyde offers. While I do theoretical research, a lot of my work is quite applied. Especially because I’m working in the technology area, it was a no brainer for me to want to be part of a university that is strong in this area and where it is possible to have interdisciplinary collaborations with colleagues in STEM subjects, as well as other subjects. I often found in the past that universities like Strathclyde are dynamic places to work and that is what suits me and the work I do. I knew already that Strathclyde was this sort of place and I’ve been in my career long enough to know that that’s the kind of institution I want to be in where I can do these sort of things and there is support and encouragement available from my colleagues.

I am also happy to be back in my home city and working within an institution that aligns with my interests in technology. I’m also excited about the possibility of bringing in expertise that I have gained elsewhere into policy discussions here as well and engaging with more people in this field.

You can keep up-to-date with Angela's research on the channels below:
https://scholar.google.com/citations?user=QgcdDGkAAAAJ&hl=en