Tanja Bueltmann joined the School of Humanities in 2020 and works within the History department. We interviewed Tanja in 2020 to find out more about her role and career.

Tell us a little bit about your career so far...
Born in Germany, I did a part of my first degree there and a part in Scotland, heading to New Zealand for my PhD after that. That is where my interest in the Scottish diaspora first developed, setting me on a research path that was to define much of my career so far. Having finished my PhD in 2008, I moved to England to take up a position at Northumbria University in Newcastle upon Tyne. My initial appointment was as a Senior Research Assistant, but I was able to secure a permanent Lectureship thereafter and then worked at Northumbria for over a decade. During that period, the focus of my work broadened and I began examining the Scottish diaspora in different locations around the world, particularly in the Antipodes, North America and parts of Asia. I also began to look at other groups, especially the English and Germans, for a wider comparative perspective. I was fortunate to work as Co-I on an AHRC-funded project exploring the English diaspora in North America, and later led an ESRC-funded Future Research Leaders project on British and German expats in Asia and their social networking practices as PI. Both projects meant that I spent a considerable amount of time conducting research in these countries, so I see myself very much as an international scholar.

What has been the most memorable moment of your career so far?
Conducting an interview in Hong Kong for my research project on British and German expats while sitting in the treatment chair in a dental practice: I was interviewing the dentist, a British expat, and this was literally the only place I could sit. I was pretty much on tenterhooks throughout, expecting the drill to arrive any minute. It certainly was memorable! Joking aside, the most memorable moment of my career so far is, without question, my promotion to Professor in 2017. While we see a growing number of female professors, their number remains small overall. This is the result of a range of factors and much has improved, but there is still ample scope for more changes. I am proud that I became a Professor when I did, but I remain very conscious of the obstacles that still exist. I look forward to more female scholars making their way to where they deserve to be, and hope to provide as much support as possible to achieve that.

What sparked your interest in History?
I always liked learning about history and read history books very early on. So I think that is where the initial spark came from. But at some point in school it was basically extinguished because a history teacher told me—and pretty much everyone else in class—that we were not very good at history. Ambitions, it is fair to say, were squashed for many of us. So I really had abandoned the idea to do anything much further with history. But eventually I remembered how much I had always loved history. So when I signed up for university—and in a twist that was very much the result of a last minute gut reaction—I chose History as one of my subjects. So it was really that gut reaction that rekindled the spark, as it were.

What is your role within the School?
As a recent starter, I don’t have a school role yet but will be supporting research leadership as we look research management in the school and what areas to focus on. I used to hold a Faculty role as Associate Dean at my previous institution and was responsible, amongst other things, for overseeing the knowledge exchange and impact portfolio, so this is an area I am particularly interested. While we haven’t even concluded the current REF cycle yet, I think it’s good to look ahead and be proactive about supporting knowledge exchange and work with external partners.

What current trends do you see influencing your field?
It’s less a question of current trends for me, I think, but more about the general academic upbringing I had and how I have approached my research ever since. Diaspora studies, and much of the work in migration history, is interdisciplinary in nature. Having been academically brought up at the University of Bielefeld—a university founded in the 1960s expressly as a so-called reform university that had interdisciplinarity at its core—I have a strong appreciation of that interdisciplinary focus. It also helps with linking my historical research with current developments, for instance in relation to Brexit.

What initially attracted you to the University of Strathclyde?
I had long since hoped to return to Scotland to be able to focus more strongly on the Scottish aspect of my work. That was a general motivation to keep an eye on positions in Scotland. What attracted me to Strathclyde, however, was the University’s vision for what it wants to achieve. The progressive and people-centred perspective adopted is appealing in itself, but it is also meant to help drive research and work with external partners. That vision is appealing to me. Moreover, I also see great potential in the collaborations that I can forge at Strathclyde, particularly in relation to policy and society research that is so well-embedded here. It connects very well with my future research plans, so that was a strong pull. Finally, it was also very attractive to see the excellent support in place to kick-start the establishment of my research.

Tell us about any research you are currently involved in...
I am currently continuing my work on the role of collective action among EU citizens as a result of Brexit. This may sound oddly removed from the focus of my previous work, but it is not: I am really a historian of associations that were set up post-migration and that is exactly what lies at the heart of my work now. Brexit has challenged the meaning and value of freedom of movement and how it is seen in the UK. For EU citizens this has already had significant immediate impacts, many of them negative. Simultaneously, however, a new kind of European diaspora is beginning to emerge in the UK, exhibiting the same characteristics of associational activism and distinct identity expressions that I have explored in historical context. My new project seeks to examine the development of this European diaspora in longitudinal perspective to shed light on the types of immigrant action that are developing in post-Brexit UK. I am working with the3million—the leading association representing EU citizens in the UK and recognised as one of the top changemakers in The Big Issue Top 100 Changemakers 2020—as part of this project, so it also has a strong impact dimension. Parallel to this I am also finishing a monograph on social networking among British and German expats in Asia.

Any special thanks or shout-outs you'd like to give to colleagues who have helped/supported you since joining Strathclyde?
Apart from academic colleagues in the School and Faculty who have all dispensed many a warm welcome, a big special thanks definitely goes to the HR and admin support teams in the School, Faculty and wider university. Colleagues have been fabulous, helping me with so many practical aspects of the move. Even just the physical move to Scotland has been more complex due to Covid, so the support around all these issues has been hugely appreciated. I have also been delighted to have already had the opportunity to meet with other colleagues such as Anne Glover (special adviser to the Principal) and John Bachtler (European Policies Research Centre), to discuss wider aspects of University life with a particular view on Brexit. As an EU citizen, someone who works on this, and also as a citizens’ rights campaigner, this is an issue close to my heart, so it has been fantastic to discuss some ideas and just to meet people who also care about these questions and seek to work on improvements for colleagues, students and the University as a whole as we move into the new post-Brexit era.

If you could switch jobs with someone, who would it be?
This may seem like a really strange reply, but at this point in time I would absolutely want to switch jobs with the Prime Minister Boris Johnson. I think the UK is heading down a dark path, so I would really quite like to run ahead and switch the light back on.

What keeps you busy outside of work?
While the impact of Brexit on EU citizens is something I work on, I am also an EU citizens’ rights campaigner in a personal capacity. This involves various activities, such as fundraising, and have had the privilege to work with a great group of people for that, including, for instance, director and comedian David Schneider, and filmmakers Alex Helfrecht and Jörg Tittel who dedicated their film ‘NYET! A Brexit UK Border Farce’ to EU citizens at home in the UK. Specifically, the campaign I founded in the summer of 2018 raised approximately £80k in total to support EU citizens in the UK, funding, for instance, the set-up and initial operations of the charity ‘Settled’, which has provided vulnerable EU citizens with vital practical help to secure their status in the UK.

For something entirely different, I also write a well-known German fashion and lifestyle blog – Stylerebelles – with two friends.

What is your guilty pleasure?
That’s easy: getting new glasses. I love eyewear. The more interesting, the better. The more colourful, the better. Maybe a little outrageous? Why not. There’s enough dullness in life, so I like to see it through a little colour and/or uniqueness at least.

You can keep up-to-date with Tanja's work and research here:
https://manchesteruniversitypress.co.uk/9781526103710/ 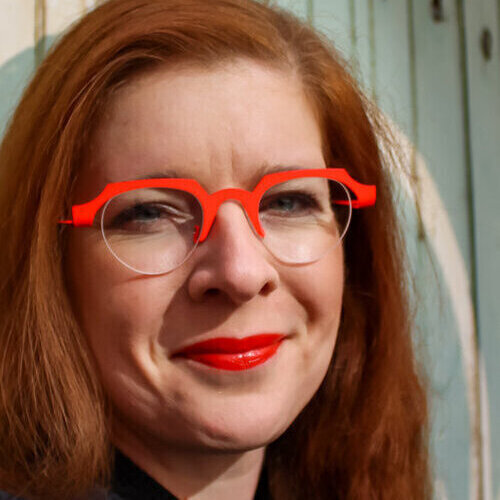