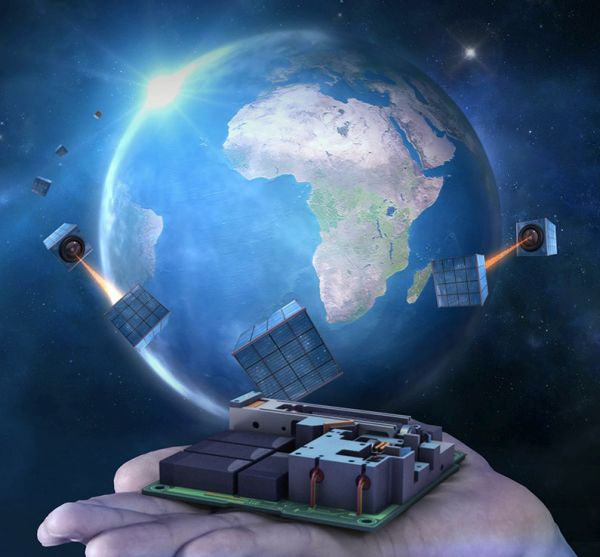 Researchers at the National University of Singapore and University of Strathclyde, UK, have launched a satellite that is testing technology for a global quantum network and report first data in Physical Review Applied. This image combines a photograph of the quantum device with an artist's illustration of nanosatellites establishing a space-based quantum network.

An international team from Strathclyde and Singapore has successfully tested in space key components for building an orbital quantum network. The results are published in the 31st May 2016 issue of Physical Review Applied and show the successful generation and analysis of highly correlated photon pairs whilst circling 550km above the Earth. This paves the way towards space-based generation of entanglement that would allow long-distance secure communication or networking of distributed quantum computers across the globe. Quantum satellites could also carry out fundamental experiments – for example, testing entanglement over distances bigger than Earth-bound scientists can manage. "We are reaching the limits of how precisely we can test quantum theory on Earth," says co-author Daniel Oi at the University of Strathclyde.

Team-leader Alexander Ling, a Principal Investigator at the Centre for Quantum Technologies (CQT) at NUS, says "This is the first time anyone has tested this kind of quantum technology in space." His team was able to package the components of a quantum optics experiment into a 300ml and 300g package (dubbed SPEQS, or Small Photon-Entangling Quantum System) as well as make the payload rugged enough to survive the rigours of launch and the uncompomising conditions of space. The toughness of SPEQS was proven by the unintended rapid disassembly of the first launch attempt on top of the Antares CRS-2 rocket that exploded 6 seconds after liftoff in November 2014, the experiment was recovered from the wreckage and found to be in working order. This time, the launch onboard the Galassia CubeSat in December 2015 was without incident and the experiment is providing valuable data about the operation of such devices in orbit.

Even with the success of the more recent mission, a global network is still a few milestones away. The team's roadmap calls for a series of launches, with the next space-bound SPEQS slated to produce entangled photons. With later satellites, the researchers will try sending entangled photons to Earth and to other satellites. Ultimately, completing a global network would mean having a fleet of satellites in orbit and an array of ground stations.

This research is supported by the National Research Foundation (NRF) Singapore under its Competitive Research Programme, and by NRF Singapore and the Ministry of Education, Singapore under the Research Centres of Excellence programme. Daniel Oi also acknowledge the Scottish Quantum Information Network and the EU FP7 CONNECT2SEA project "Development of Quantum Technologies for Space Applications".

See the CQT website for a longer description of this research.

Following the launch of a Chinese satellite with a quantum experiment, extensive media coverage has compared this with the Singapore/Strathclyde experiment, for example in Nature and on BBC Radio 5 Live.

An English-language version of a story on XinhuaNet quotes Dr Oi:

"Daniel Oi, physicist from Britain's University of Strathclyde, believes what China has done has the potential to help global efforts to develop secure networks. 'The data and experience gathered from the mission would be very useful for future development, especially how to overcome the challenges of sending quantum signals over long distances, much greater than has been achieved previously.'

Oi, who is on a UK-Singapore quantum program, said the Chinese project 'would show the underlying feasibility of satellite quantum communication hence reducing the risk that may sometimes discourage funding agencies from supporting cutting edge research, especially space missions that can be costly and take a long time to develop.'

BBC coverage of the launch stated, "The UK's University of Strathclyde has also teamed up with the National University of Singapore to do quantum experiments on board tiny satellites."