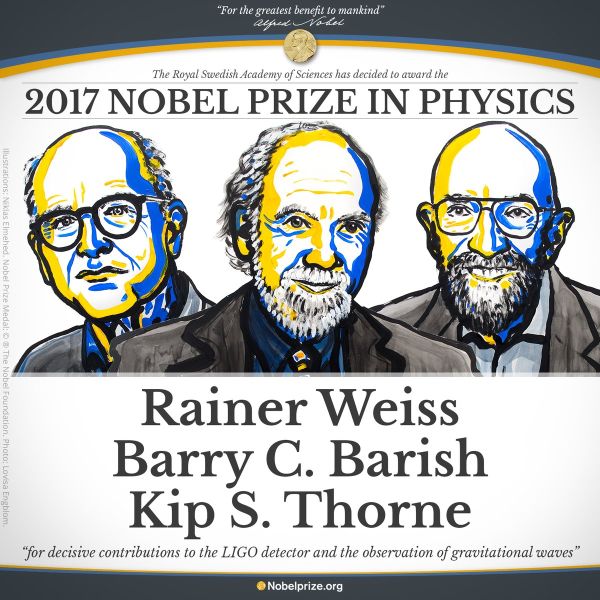 In a new release from Caltech, Kip Thorne said: "The prize rightfully belongs to the hundreds of LIGO scientists and engineers who built and perfected our complex gravitational-wave interferometers, and the hundreds of LIGO and Virgo scientists who found the gravitational-wave signals in LIGO's noisy data and extracted the waves' information. It is unfortunate that, due to the statutes of the Nobel Foundation, the prize has to go to no more than three people, when our marvelous discovery is the work of more than a thousand."﻿

Prof. Lockerbie said, "I am very grateful to Professor Jim Hough, of the University of Glasgow's Institute for Gravitational Research, for inviting me back in 2003 to take part in the huge LIGO gravitational wave project, and subsequently in the Advanced LIGO upgrade, an upgrade which enabled the discovery of gravitational waves to be made."

"I feel extremely privileged to have been around at just the right time, to marvel at the initial discovery of two Black Holes colliding ~1.3 billion years after the event! Now, the discoveries just keep rolling in, and they are truly revolutionizing our understanding of the Universe."

Professor Sheila Rowan, director of the Institute for Gravitational Research at the University of Glasgow, said: "We're in the very early, very exciting first stages of gravitational wave astronomy, a whole new way of examining the cosmos."

"Along with our UK partners at the University of Birmingham, Cardiff University, the University of Strathclyde, and the STFC Rutherford Appleton Laboratory amongst others, we're very much looking forward to pushing back the boundaries of our understanding of the universe."

More in the news:

Institute of Physics
University of Glasgow