Almost 40 years ago, Tajima and Dawson in UCLA first proposed the idea to accelerate electrons to high energy by use of so called the laser wakefield in plasma, a kind of electrostatic waves. The laser wakefield propagates with a phase velocity close to the speed of light in vacuum and it can provide an acceleration gradient about a thousand times higher than that of conventional RF cavity accelerators. Therefore it has the potential to reduce the size of existing accelerators by a factor of 1,000 and greatly reduce the cost of accelerators.

Currently, based on laser wakefield acceleration (LWFA), desktop-based X-ray sources have shown promising applications in medicine and science, and electron acceleration to multi-GeV has been demonstrated experimentally. In the meanwhile, LWFA of electrons and positions has been proposed as one of the options of future TeV colliders. However, due to the limitation of single-stage acceleration, it is necessary to separate the electron acceleration in multiple stages with many laser pulses sequentially in order to reach TeV-level energy. This proved to be extremely challenging until 2016, when the group led by Wim Leemans in LBNL first realised the two stage acceleration (Nature 530, 190–193 (2016)) after nearly a decade of efforts. Their staging acceleration involves the complicated plasma mirror and the plasma lens technologies. The efficiency of electron injection into the second stage is limited to a few percent, far from satisfactory if considering hundreds of cascade acceleration required for the TeV electron-positron collider. 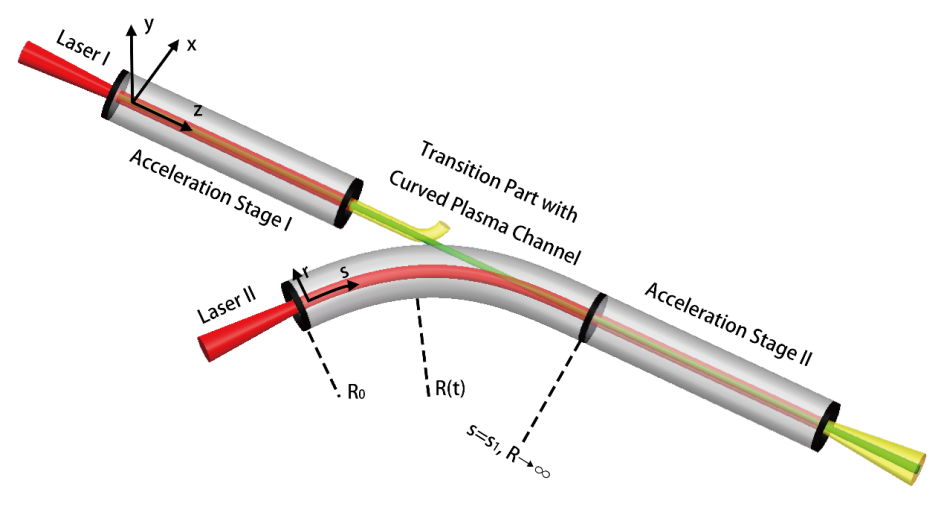 In a recent work published in Physical Review Letters 120, 154801 (2018), Prof. Zheng-Ming Sheng and Prof. Dino Jaroszynski and collaborators in Shanghai Jiao Tong University, Lawrence Berkeley National Laboratory and UCLA have proposed a new scheme of cascade acceleration based upon LWFA. In this scheme, they use a curved plasma channel with a gradual curvature radius combined with a long straight plasma channel to guide the secondary driving laser and the electron beams, respectively. The stable excitation of the secondary laser wakefield and the smooth injection of the electron beams into the wake of the secondary laser are achieved simultaneously. This new scheme shows high cascade injection efficiency. For example, their computer simulations show that the cascade rate can reach nearly 100% for electron beams with a primary accelerating energy exceeding 2 GeV, making the scheme particularly suitable for high energy acceleration. At present, the research teams are discussing the possible experimental demonstration of the scheme in the future.