For intense particle beam-driven plasma wakefield acceleration (PWFA), typically large linear accelerators (linacs) based on classical radiofrequency-cavities are required. A prominent example is the electron beams produced in the kilometre-long tunnel at Stanford’s Linear Accelerator Centre (SLAC), which historically was used for fundamental discoveries such as the existence of the quarks, and is now used for PWFA research in the FACET facility and for photon science with x-ray free-electron lasers. The huge size and costs of these accelerators, however, limits capacities and their applicability.

A concept, originally introduced by a team of researchers around University of Strathclyde’s Prof. Bernhard Hidding and Prof. Stefan Karsch from Ludwig-Maximilians-University Munich in 2010, aims at a new hybrid generation of plasma wakefield-based accelerators that combines compactness, high energy and high quality of the electron output. Now, a new European collaboration between scientists in the UK, Germany and France have made major steps on this path. In experiments at Munich, the electron beam output of a compact laser-driven wakefield accelerator (LWFA) was purposefully used as a driver for a plasma wave in an attached PWFA stage. In this result, published in Physical Review X 9, 011046 (2019), a further laser pulse arm was used to illuminate the plasma wave dynamics generated in the PWFA stage. This allowed the observation of highly interesting and momentous insights into ion motion in PWFA systems, which in turn is important for future PWFA R&D at large linacs such as at SLAC FACET-II. This shows that compact hybrid LWFA+PWFA systems can be used as test-beds for PWFA research. 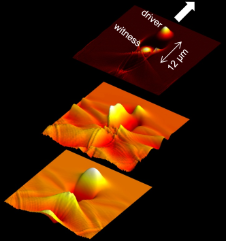 But the experiments are also highly encouraging for wider goals of hybrid LWFA+PWFA, namely to use them as an energy booster for LWFA and a beam brightness transformer. These prospects are being explored in collaboration with Strathclyde’s industrial partner RadiaBeam Technologies, in an US DOE-funded programme on “Plasma Photocathode Beam Brightness Transformer for Laser-Plasma Accelerators” since 2013 and in the Strathclyde-led Work Package 14 “Hybrid Laser-Electron-Beam Driven Acceleration” as part of the Horizon2020 EuPRAXIA project since 2015. As highlighted in the current publication in Physical Review X, this could enable compact and fully synchronized plasma photocathode PWFA systems for highest brightness “witness” electron bunches, exceeding those of conventional, kilometre-scale accelerators by orders of magnitude. The proof-of-principle of this approach has been recently demonstrated at SLAC FACET in the “E210: Trojan Horse PWFA” collaboration and will be further developed at SLAC FACET-II, which comes online later in 2019. In plasma photocathodes, a synchronized laser pulse releases high quality electron beam populations into the beam driven plasma wave via tunnelling ionization.

The longer-term goal is to combine both approaches in hybrid LWFA+PWFA systems. Here, the synchronization between plasma photocathode laser pulse and electron beam comes for free, as both are derived from the same laser system. This is an ideal fit, and such compact and ultrahigh beam quality electron beams could hence be realized and exploited at laser-plasma-laboratories such as the Scottish Centre for the Application of Plasma-based Accelerators (SCAPA) at the University of Strathclyde, for example at the Cockroft Institute beamline which is currently under construction, or at the Central Laser Facility in the UK. The research thrust is also part of the recently published UK Roadmap for Plasma Wakefield Accelerator Research, compiled by the Plasma Wakefield Accelerator Steering Committee (PWASC).