Poles apart: Determining the Polarity of GaN Nanowires and its influence on their Light Emission

Intense electric fields are an inherent feature in nearly all of the optoelectronic devices built from gallium nitride (GaN) and related “III–nitride” semiconductors. These include high-brightness, high-efficiency LEDs for solid state lighting, transistors for high-power, high-temperature environments (such as in electric vehicles), blue lasers for optical storage and newer applications such as LiFi. The device properties and performance are closely connected to the strength and direction of the in-built fields. In its usual orientation GaN lacks inversion symmetry and the field direction depends on whether surface has a sheet of Ga-atoms overlying a sheet of N-atoms (referred to as Ga-polar) or vice-versa (N-Polar). We present a method providing the ability to non-destructively determine polarity in a statistically significant number of 3D nanostructures and to directly correlate the polarity to light emitting properties. Our recent paper in Nano Letters [1] describes how this desirable capability has been achieved in the Semiconductor Spectroscopy and Devices group. Measurements based on electron diffraction in a scanning electron microscope identify polarity in individual nanorods, with diameters of 100s of nm, and go on to demonstrate the influence of the polarity change on the light emission. The Strathclyde researchers worked closely with visiting Professor, Aimo Winkelmann, using samples provided by epitaxy specialists at Sheffield University as part of the collaborative EPSRC grant “Manufacturing of nano-engineered III-N semiconductors (EP/M015181/1)” and analysis supported by “Quantitative non-destructive nanoscale characterisation of advanced materials (EP/P015719/1).” 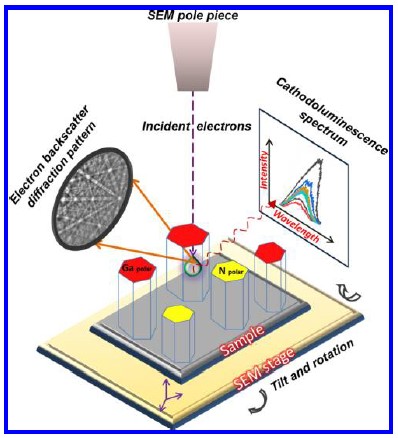 The crystal polarity was determined nondestructively using electron backscatter diffraction (EBSD) and the impact of the nanowire polarity on light emission then investigated using cathodoluminescence (CL) spectroscopy. The key to determining polarity was identifying and understanding subtle differences in the intensity distribution of bands of the EBSD pattern associated with semipolar planes. Experimental EBSD patterns from an array of GaN nanowires were compared with theoretical patterns produced using dynamical electron simulations to reveal whether they are Ga- or N-polar or, as in several cases, of mixed polarity. CL spectroscopy then revealed the effect of the polarity on light emission, with a small but measurable shift in the wavelength of light emitted by the GaN between those with Ga and N polarity. This energy shift is likely related to a difference in impurity incorporation in nanowires of different crystal polarity.

This new approach can nondestructively identify polarity in a wide range of other nanometer scale material systems which lack inversion symmetry, and provide direct comparison with their luminescence.