It's not long now until our new Learning and Teaching building opens... and we can't wait to welcome you!

The new building, in the heart of our city-centre campus, will bring the majority of our student support services, new students' union, as well as first-class teaching and learning facilities under one roof.

Highlights of the new building include:

The Learning and Teaching building will focus on all aspects of the student journey - from your very first days with us through to supporting you after graduation and beyond.

What's inside the Learning & Teaching building

Check out how the building looks

Take a look at our drone footage video to see how your new building looks as it gets closer to completion.

The £60 million Learning and Teaching building project represents our biggest single investment in a campus project to date. The building will become a beacon for teaching and learning excellence.

Our new facility brings together the former Architecture and Colville buildings, and also reuses the former shells and cores of both of these buildings. It will place student-facing services at the centre of the campus, and give access to new ways of teaching.

The new development will also meet the needs of our student population growing in size and diversity. There is a projected growth of 30% in the number of our overseas students over the next five years.

The Learning and Teaching building will also greatly enhance the built environment and perception of the campus becoming a structure befitting of Strathclyde’s position as a world-leading technological University and a place of useful learning. 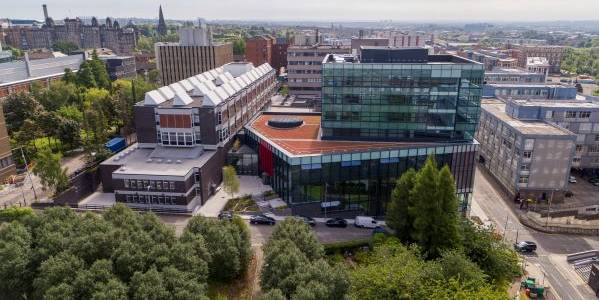 Earlier this year, we held a consultation to name the two wings of the Learning and Teaching building after inspirational women that the University would like to honour.

The University community was asked to vote from a list of five women (selected by a committee of students and staff) and, following more than 4,400 votes, the two wings of the building and the plaza, which connects the two wings, will be named as follows:

Speaking after the vote, Professor Sir Jim McDonald said: "It is fitting that this important building will be named after inspirational people who have made a fantastic impact on the world around them – and I hope it will inspire our future leaders in engineering, science, business, humanities and social sciences, to do the same, whatever career path they choose to follow."

We are now actively looking at how we will honour the other names on the shortlist – the philanthropist Isabella Elder who helped widen access to education in the 1900s, and the botanist, bacteriologist and biologist Professor Blodwen Binns.

Facts about the building:

The transformation of our campus reflects our commitment to our students and our status as a leading international technological University.

The Learning and Teaching building will create a stunning new home for StrathUnion at the centre of campus. We’re bring the outside in, with beautiful trees and green spaces in the heart of our indoor space - The Terrace - where it all happens!

Whether you’re looking to enjoy the amazing year-round events programme of live music and sport, chill out, or get involved with more than 100 clubs and societies, the new space has something for you.

Find out more about our new students' union

A truly unique space, run by students for students. The new Union will transform the student experience at Strathclyde -  not only do we have one building bringing all student services together, we have a purpose built student union focused on the needs of students now and into the future. This building is a game changer for Strathclyders and we can’t wait to welcome you.