A collaboration between Science and Engineering research groups at the University of Strathclyde has won an award from an international journal.

A paper based on the research, produced by Strathclyde’s Institute of Photonics and LiFi R&D Centre, has received the 2022 Best Paper Award from IEEE Photonics Technology Letters.

The paper introduced a new format of light-emitting diode device which demonstrates a very high modulation bandwidth for optical wireless communications, while giving sufficient output power for deployment in indoor lighting systems. This area of data communications through solid-state lighting, known as LiFi or light fidelity, is one of particular strength at the University.

IEEE Photonics Technology Letters publishes groundbreaking research in optoelectronic devices and systems, with a strong emphasis on optical communications technology. This award is given to the paper considered to be the best among the papers published in the journal during the previous three calendar years, as judged by the four criteria of originality, technical content, impact and presentation. Typically, around 900 papers are published by the journal during the period under consideration. 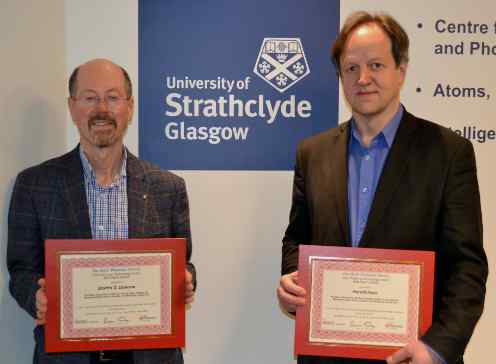 Professor Dawson said “It was a fantastic surprise to receive this award from the IEEE Photonics Society. I’m particularly pleased, on behalf of all the team, to see this recognition for our longstanding and very productive research collaboration with Professor Haas’s group – we have found a perfect synergy between his vision of LiFi as a lighting-enabled communications capability and our vision of the applications of micro-LED device technology. This is an excellent example of cross-faculty collaboration.”

Professor Haas said: “We are absolutely thrilled to receive this prestigious paper award which is such a wonderful recognition for the team’s outstanding work. It is a privilege to be able to drive the capability of LiFi technology beyond existing limits because of this unique collaboration with Professor Dawson’s group, who have been pioneering micro-LEDs for many years.”

The paper, by a roster of authors in the two research groups, is titled Over 10 Gbps visible light communications for long-distance applications using a GaN-based series biased micro-LED array. The award was formally presented at the IEEE Photonics Conference, held in Vancouver.