Ancestral land claims and the law in Namibia

This is a blog post by Willem Odendaal, a PhD researcher working with our Strathclyde Centre for Environmental Law & Governance (SCELG). A similar version of this article first appeared on 18 June 2020 in a column in The Namibian newspaper. 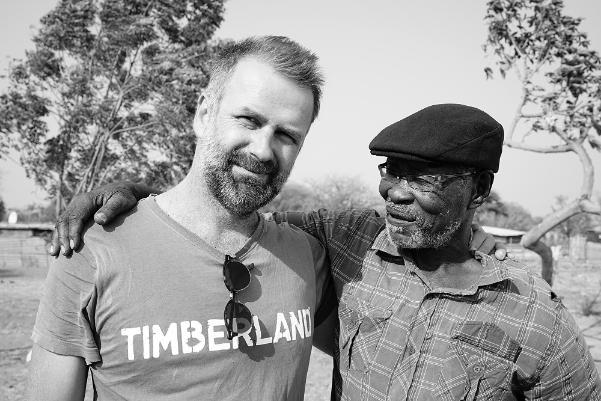 Pictured left to right: Willem Odendaal, the author of this blog post, and Jan Tsumib, a claimant in a Namibian court case about ancestral land.

Many of Namibia’s indigenous communities lost their ancestral lands during the colonial and apartheid times. Yet the topic of ancestral land claims has been an uneasy political debate since Namibia gained its independence in 1990. At the end of the 1991 Land Conference, it was decided that restoring “ancestral lands” would not become part of the Namibian land reform programme. This was motivated by the fear that it might cause various ethnic groups to fight over their rights to ancestral land and as a result, undermine national unity. Consequently, the Namibian policy and legislative framework on land reform has developed in such a way that it does not support ancestral land claims, unlike South Africa, where the Restitution of Land Rights Act was enacted in 1994. The key objective of the 1994 Act is to provide for the restitution of land rights in respect of which persons or communities were dispossessed under or for the purpose of furthering the objects of any racially based discriminatory law during South Africa’s apartheid era.

What follows below is a brief discussion of how ancestral land claims could be included in the existing Namibian legislative framework.

Ancestral land claims are not new. The ancestral land rights of indigenous people, and their claims for compensation for the loss of their land, have been recognised in African courts in countries including South Africa, Kenya, Botswana, Australia and Canada. As the Mabo case in Australia has shown, ancestral land claims are mostly relevant in countries that inherited a common law system, as Namibia has, because of the common law rule that “possession” significantly contributes to a claim of ownership.

Firstly, Article 12 of the Namibian Constitution provides that anyone is entitled to approach the court to determine his or her rights. This means that when someone is aggrieved by some wrong done to them, they can approach a court to have it remedied.

While the Namibian Constitution does not explicitly recognise the rights of indigenous peoples, it could still provide support to indigenous peoples’ ancestral land claims. For example, Article 10(2) stipulates that no person may be discriminated against on the grounds of sex, race, colour, ethnic origin, religion, creed or social or economic status. Additionally, Article 19 specifies that every person shall be entitled to practice any culture, language, tradition or religion, subject to the terms of the Constitution. Indigenous peoples would seem to fit the criteria of both Articles 10 and 19.

Similarly, in Namibia, the recognition of customary land rights has been confirmed by the Supreme Court, in the Kashela matter. The key question for decision was: What happens to a person’s unregistered customary land right when the communal land she lived on becomes town council land? The Supreme Court concluded that the customary land right of Ms Kashela had not been extinguished by the proclamation of the Katima Mulilo townlands. Thus, its decision clearly leans towards the rights-giving nature of the Namibian Constitution, reinforced by its declaration that “where there’s a right, there’s a remedy”.

A similar version of this article first appeared on 18 June 2020 in the Legal Assistance Centre’s Pro Bono column, a weekly feature in The Namibian newspaper. For more on the Legal Assistance Centre please see https://www.lac.org.na/ and for more on The Namibian newspaper please see https://www.namibian.com.na/