Fáilte to readers of the Strathclyde Law Blog. My name is Michael Foran and I’ve recently joined the law school as a lecturer in Public Law. 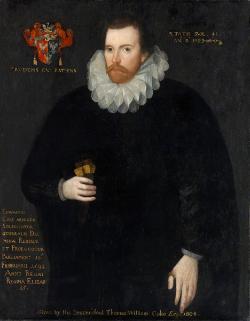 By way of introduction to myself and my research, I thought it would be interesting to discuss a founding figure of the common law: Sir Edward Coke. Coke was an English Parliamentarian, barrister, and judge who was unquestionably the greatest jurist of the Elizabethan and Jacobean eras. As Chief Justice of the Common Pleas, he was a champion of the rule of law, declaring the King to be subject to the common law and not above it. During his time in Parliament, he authored and secured the passage of the Petition of Right, a document setting out individual civil liberties as against the state, one of arguably equal constitutional significance to Magna Carta and the Bill of Rights 1689.

So, a man of great renown whose life and deeds could inspire many dozen pieces. For this post, however, I wish to focus on one particular judgment of his, and one particular aspect of that judgment which exemplifies the common law method to which I am attached. The Case of Prohibitions [1607] EWHC J23(KB) was decided by Coke before the Glorious Revolution and so during a period where the Sovereignty of Parliament had not yet been established conclusively. This was a time of great tension between the Stuart monarchy and Parliament, with Coke playing an instrumental role leading to the British Civil Wars.

Of central concern was the place of the monarch within the Constitution and it was this issue that fell to be decided by Coke. King James I – with due apologies to Scottish readers for adopting his English regnal number for the purposes of this post – had placed himself in the position of judge during a land dispute between two parties, hearing argument and providing sentence. When the case came before Coke, he overturned the decision of the King, holding that such disputes were subject to the rule of law. James I had argued that, where there is not express authority in law, the King may decide cases in his Royal person and that he may take any cases he pleased from the determination of judges and determine them himself. In response, Coke held that

“the King in his own person cannot adjudge any case, either criminal, as treason, felon, etc. or betwixt party and party, an adjudged in some Court of Justice, according to the law and custom of England”.

In response to this, the King said, that he thought the law was founded upon reason, and that he and others had reason, as well as the Judges. In so doing, James I put a direct challenge to the constitutional role of the courts, demanding an explanation for why it is the judiciary, and not the executive or Parliament, that is the body to determine the law of the land. This was a particularly significant challenge, given that James I was quite right in noting that the common law claims to be founded upon reason. Indeed, the rule of law is said to be contrasted with the arbitrary rule of men, conceptually set up in contrast to unreasonableness.

This case raised a central question as to the relationship between law and politics within our constitution: Why is it that the judiciary is empowered to assess the reasonableness of the executive? What makes judges so much better at reasoning than the King - or in our modern context, elected representatives – that they can sit in judgment on these grounds? In response to this challenge, Sir Edward Coke had the following to say:

true it was, that God had endowed His Majesty with excellent science, and great endowments of nature; but His Majesty was not learned in the laws of his realm of England, and causes which concern the life, or inheritance, or goods, or fortunes of his subjects, are not to be decided by natural reason but by the artificial reason and judgment of law, which law is an act which requires long study and experience, before that a man can attain to the cognizance of it

What Coke was identifying here is the unique method of reasoning that is central to the common law and which is essential for the rule of law to be maintained. In drawing a distinction between the natural reason of the layman or monarch and the artificial reason of the common law, Coke revealed a key feature of legal practice: the importance of reasoning within an institutional structure of past precedent and established principle.

To reason is to engage in the process of drawing logical inferences. Within formal logic, the drawing of inferences has been characterised, from Aristotle onwards, as deductive (drawing inferences from general principle to particular case) or inductive (drawing inferences from particular case to general principle). Lawyers and judges engage in both of these kinds of reason all the time. We use inductive reason to draw general legal principles from the ratio of particular cases, when read together. For example, when analysing the law of tort, lawyers and judges will look to the various cases that pertain to negligence to derive general principles setting out how one might breach their duty of care in a given instance. Similarly, they will use deductive reasoning to draw on those general principles to decide a specific case with a novel fact pattern. Natural reason is the ability to do this in the abstract; an innate human faculty that requires no special knowledge or expertise. Artificial reason of the kind identified by Sir Edward Coke is bounded – constrained by common law principle and constitutional value.

It is this kind of artificial reason that is of unique relevance to lawyers and law students, particularly those interested in the relationship between law and politics.  The law of judicial review, wherein a court determines the lawfulness of governmental or administrative action, recognises the natural reasonableness of the executive and those who comprise it. This is in direct parallel to the natural reason of the monarch recognised by Coke. The common law also recognises that the court is no better placed that the ordinary man to determine what reason demands in this sense. Rather, it must look to the artificial reason of the common law as the standard by which it determines the lawfulness of administrative action: to principles and rules that have been tested through time by courts in their pursuit of justice. Judges and lawyers are expected to reason within the confines of the practice of the common law – abstract questions of justice or morality are alien to the judicial role, properly understood. As such, when assessing the reasonableness or lawfulness of executive action, the courts will draw upon common law principle to assist in their interpretation of statute and to set the boundaries of executive legitimacy such that administrative action is compatible with the rule of law.

This dichotomy between artificial and natural reason can help us to illuminate an important aspect of public law: the distinction between review of the lawfulness of administrative action and appeal of the merits of a particular decision. Any sharp distinction between review and appeal should be resisted if it is premised upon the false belief that judicial review does not look to merits in any manner whatsoever. Judicial review is not solely concerned with procedure, for example. It will look to the substance of a decision when needed. However, the judiciary are bound to review within the confines of artificial reason and so cannot engage in an all-things-considered analysis of the merits of an administrative decision or policy. That is the purview of, in our modern context, the elected representatives who have been entrusted with the responsibility to both determine and efficiently pursue the common good. The artificial reason of the common law places restrictions on what can be done in that pursuit, as informed by constitutional value and principle.

In other words, political discretion is recognised by the common law as essential to the correct pursuit of the common good; the judiciary are in no special position to determine how best to pursue tax policy or to decide on the all-things-considered merits of a particular healthcare bill. They are, however, uniquely placed to assess the lawful limits of executive discretion. As legal philosopher Ronald Dworkin notes, “Discretion, like the hole in a doughnut, [is] an area left open by a surrounding belt of restriction.” (Taking Rights Seriously (1978), page 31.) Those restrictions are determined by the artificial reason of the common law, informed by our institutional history and the rules and values which have stood the test of time, understood now to set the boundaries of legitimacy on the executive. Yet it must be remembered that the reverse is also true, the hole of discretion, of natural reason reserved for the elected branches of State, is one into which the judiciary cannot venture. The court maintains its legitimacy by confining its analysis to questions of legality, drawing upon artificial reason and constitutional principle. It loses its legitimacy when it purports to step into the realm of natural reason, to assess questions of policy without any reference to the rule of law or the intention of Parliament. We have recently seen charges brought against the judiciary that this is exactly what it has been doing of late, prompting an executive review of judicial review of the executive.

Without wishing to get into the quagmire that is that debate, I will close by stressing that the important question to be asked when assessing this charge is not whether the courts have addressed “political questions” in their review of administrative action (all questions of public law are political in some sense), but whether the courts have stepped beyond their constitutional role, outside of artificial reason and into a full-blown assessment of government policy in a manner more reflected in all-things considered natural reason. Equally, we must ask whether the executive, in attempting to assert control over the judiciary in this instance, are echoing the actions of James I, presuming that they are permitted to assume the role of judge and assess legal questions, simply because they have political legitimacy to pursue the common good. It is only when we see the distinction between these two kinds of reason that we can begin to understand the intricacies of these debates and the nuances of the rule of law which is necessary for their resolution.