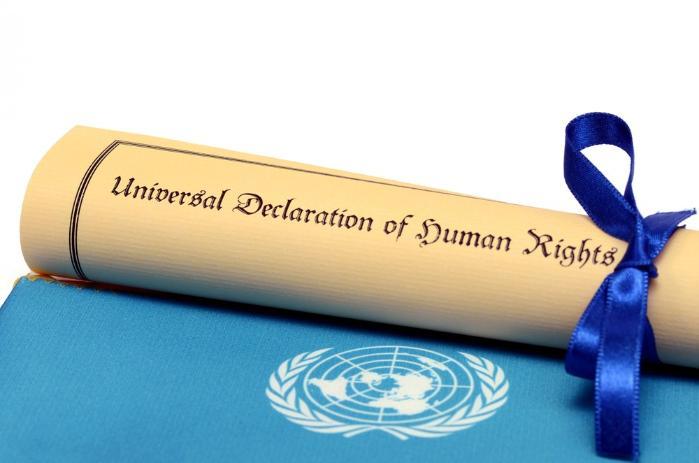 10 December is celebrated every year to commemorate the signing of the Universal Declaration of Human Rights in 1948 in San Francisco following the end of World War Two.

Covid-19 has caused the biggest global crisis since that time in history. Once again the United Nations is making a call to build back better through placing human rights at the centre of the recovery.

This day therefore is the occasion every year to take stock of progress and chart a way forward. This year it is even more important to do so.

What then are some of the lessons from 2020?

Firstly, the pandemic has taught us that what matters are people, governments and science.

People have needed to stick together to support one another to get through the crisis.

Governments have needed to mobilise massive resources to protect the health and livelihoods of people and have shown what is possible when they have a political will to act.

Science has been supported and has responded to provide a way out of the immediate health crisis.

The pandemic is the consequence of the failure to protect the environment and biodiversity. It has also laid bare the lack of economic and social resilience and revealed the structural inequalities within and among nations. It is universally the poor and disempowered who have borne the brunt. Women, children, ethnic minority communities, migrants, disabled, older, and LGBTI people are among those who have suffered a disproportionate impact.

At the same time the emerging issue now is the need for such levelling to also be seen in enabling the universal and affordable access to vaccines as that is the only sustainable recovery.

Secondly, the underlying and greater global crisis is the climate emergency.

The lessons from and responses to the pandemic need to be urgently scaled up if we are to pass on a world fit for future generations. People, governments and science are again what matters.

António Gueterres, the UN Secretary-General, has stated that “making peace with nature is the defining task of the 21st Century and is the top, top priority for everyone, everywhere”.

The UN’s Special Rapporteurs on all aspects of human rights have jointly issued an appeal that an unprecedented scale of action is also imperative if we are to salvage the Sustainable Development Goals which are key to meeting the climate challenge and indeed many other of the global challenges including poverty, conflict, forced migration and inequalities.

The science is compelling that the COP 26 next year in Glasgow needs to demonstrate a turning point in climate commitments to not only 2050 but, critically, to 2030.

Climate justice demands nothing less than this for it is those who have contributed least to climate change who are suffering the most from its impact.

It is people who must hold their governments to account in response to the science and in support of future generations. The scale of the response to the pandemic has demonstrated just what is possible when there is political will.

Thirdly, our times demand a leadership of humility which brings out the best of humanity and respects the natural environment.

The pandemic and climate crisis show us that we live in an inter-dependent world and therefore that multilateralism is essential – be that universal and affordable access to a vaccine or universal commitment to a carbon net zero world.

Life is demonstrating that we are indeed all in this together. There is no and there can be no claimed monopoly on knowledge or wisdom, no justification for exceptionalism and no profit placed before people and planet.

We are living in times not experienced since the signing on 10 December 1948 of the Universal Declaration of Human Rights.

It “set a standard of common achievement” for all nations and although it has been challenged by events ever since it has undoubtedly stood the test of time. This is because its rights are founded on the universal value of human dignity.

Once again it is at the heart of a call from the UN for the world to build back better. Its full realisation would be transformative for the world.

Of course many disciplines will contribute to achieving this human progress.  Science, technological innovation and a green economy serving human wellbeing are just a few among those.

A specific contribution, however, of human rights is that it can unify and empower the people of the world to hold to account the decision-makers and demand that science, technological innovation and a green and wellbeing economy are harnessed to enable people to lead lives of human dignity in harmony with the environment.

As we mark International Human Rights Day in Scotland we are at a moment, for a variety of reasons, when we have an opportunity to build back better as a country and in doing so contribute to progress in the wider world.

The Scottish Government has established the National Taskforce for Human Rights Leadership to prepare recommendations for a Bill to be presented to the next session of the Scottish Parliament. The Bill will introduce a new human rights framework for Scotland to enable the effective implementation of the Universal Declaration of Human Rights and subsequent UN human rights treaties.

This most timely and ambitious human rights initiative, along with its equally ambitious climate action commitments, enable Scotland to play its part in welcoming the global community, including both governments and civil society, to the pivotal COP26 in Glasgow next November.

Professor of Practice in Human Rights Law, University of Strathclyde

Independent Co-Chair of the National Taskforce for Human Rights Leadership