The Civil Partnership (Scotland) Bill – who could object to equality? 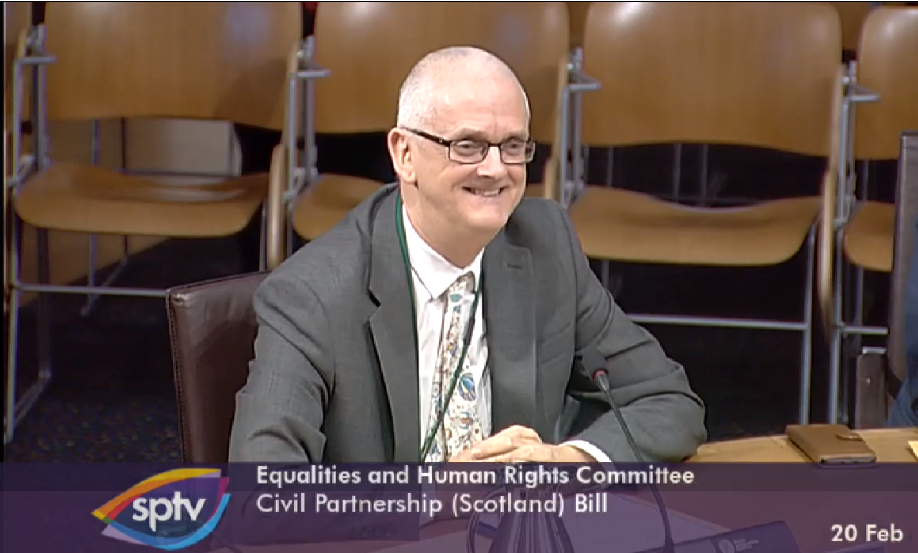 Professor Norrie explains here his lack of enthusiasm for the Civil Partnership (Scotland) Bill, currently before the Scottish Parliament.

I could, and did.  The evidence session may be viewed online.

The present situation whereby same sex couples have the choice of either marrying or entering a civil partnership, but mixed sex couples’ only option is marriage, has always been indefensible.  But removing the anomaly is hardly the most pressing issue facing our legislators today.  Even if we accept that legislation is required, I should have preferred the alternative approach of closing future civil partnerships to all couples.

This is because, from a purely legal perspective, it is inefficient law to have two identical institutions doing effectively the job of one.  Having two forms of registered relationship means that there requires to be two sets of forms designed, two routes to registration, two registers, two mechanisms to authorise celebrants, two sets of divorce regulations and court rules.  Every time there is law reform the drafters will need to amend two collections of statutory materials, and parliamentarians will have to be on their guard to ensure that the unity of outcome is maintained.  That effort might be worthwhile if the two institutions represented genuine choice, but if the only difference lies in the name of the institution then it hardly seems a good use of parliamentary time.  It is only lawyers and pedants (largely overlapping categories) who insist on correct terminology, and couples themselves are free to describe their relationships however they wish.

The choice, in other words, that the law offers to same sex couples and (soon) mixed sex couples is not one of substance but of terminology.  I do not deny that the law should offer the same choices to all couples, irrespective of gender-mix; but that principle requires legislative intervention only if the choice offered actually makes a practical difference.  I could understand maintaining two institutions, open to all couples, if they had substantially DIFFERENT consequences.  For example, one institution might involve an intermingling of property more than the other, or provide a higher level of succession rights than the other, or involve grounds of dissolution more difficult to establish with one than the other.  Different terminology would serve to highlight the different practical effects of the two relationships.  But in Scotland we don’t need such complexities because couples already have a choice between a registered relationship with substantial legal consequences, and an unregistered relationship (cohabitation) with important but more limited consequences, and a far easier escape route than divorce.

The logical conclusion of this line of argument is that there should be one form of registered relationship, open to all couples irrespective of gender mix.  I am not particularly bothered what we call that institution, but international recognition is likely to be more extensive for an institution called “marriage” than one called “civil partnership”.

However, the argument in favour of opening civil partnership to mixed sex couples was never about the right to be treated differently in law from married couples.  It is about the symbolism of the name, and the right to reject the name “marriage”, just as same sex couples can reject it in favour of “civil partnership”.  Symbolism in the law is often important.  The Marriage and Civil Partnership (Scotland) Act 2014 gave to same sex couples little that they did not have in substantive legal terms under the Civil Partnership Act 2004, and its major importance lies primarily in its symbolism.  By 2014 the argument was not about extending rights and obligations to same sex couples: it had become whether the message contained in the exclusion of same sex couples from marriage could be allowed to stand.  That message was one of hierarchy of relationships, of “separate but equal”, of social exclusion: excluding same sex couples from marriage was the last remaining legal assertion of heterosexual superiority.  So allowing the word “marriage” to be used by same sex couples on the same terms as it is used by mixed sex couples brought final recognition of the moral, legal and social equivalence of the two types of couple – and indeed of the two (main) genders themselves.  It was the final repudiation of over 2000 years of discrimination against and official contempt shown to lesbians and gay men, which destroyed lives (often quite literally) and denied happiness, emotional fulfilment and contentment to countless people through the ages, until less than a generation ago.

Excluding mixed sex couples from “civil partnership” was not, however, designed to institutionalise the legal and moral superiority of same sex couples; it was not designed to deny rights and liabilities to mixed sex couples; it was not designed as part of an official policy to demean and disparage and make vulnerable to abuse heterosexual men and women.  It was designed with the wholly good objective of giving lesbian and gay people what non-gay people already had – access to a means of legitimising their most important personal relationship – and to do so without frightening the horses.  The exclusion of mixed sex couples was an accident of history, not a deep-rooted and malign act of discrimination against straights.  The symbolism of removing an exclusionary rule, a hugely important factor when legislating for equal marriage, is of minimal importance where equal civil partnership is concerned.  Putting it bluntly, a “Let’s Be Nice to LGBT People (Scotland) Act” is far more important than a “Let’s Be Nice to Straight People (Scotland) Act” – because the law and society always has been nice to straight people but is only now learning how to be nice to gay people.  (It still struggles with the “T” in LGBT).

Of course some people perceive marriage as such a flawed, patriarchal, misogynistic institution that they just cannot bring themselves to enter it.  But that is an internal belief rather than a position of practical disadvantage.  To refuse to engage with the institution “marriage” today because of its past is rather like refusing to vote in elections because women used to be denied the vote in order to ensure that political decision-making remained solely within the male domain.  It is to ignore the fact that the 2014 Act has allowed the institution of marriage to put its history behind it and become gender-neutral.

Of course, the new Bill aims to make civil partnership gender neutral too, by removing an anomaly that I accept is unjustified.  But it is one that affects the emotions of straight people, not their position in law.  If the law were genuinely concerned about ensuring the same choices for everyone, about equality for more than just straight people, it would tackle the real limitation of choices available to same sex couples who even today suffer far more serious limitations in their actual choices than mixed sex couples.  While both mixed sex and same sex couples can in theory choose to be married by a state official in a secular ceremony, or by religious ceremony before a cleric of god, the actual range of options available to mixed sex couples continues to be far greater.  The present law (ss. 8 to 12 of the Marriage (Scotland) Act 1977) requires religions and religious officials to “opt-in” to offering marriage to same sex couples, and far fewer of them have done so than offer these services to mixed sex couples, whose range of options when planning their marriage is therefore, lawfully, far greater.  Both the Equality Act 2010 and the Marriage and Civil Partnership (Scotland) Act 2014 permit this actual discrimination against same sex couples.  So the new bill seeks to extend “choice” to straight people even though that choice has no practical legal consequence, but it fails to tackle the existing and actual disadvantage faced by all LGBT people.

Instead of addressing a minor hurt to straight people, I should have preferred the Scottish Parliament to turn its attention to the outrageous levels of bullying suffered by LGBT people in schools, in the workplace and on social media; to the fact that levels of homelessness and mental health problems are far higher for LGBT people than for straight people.

Having said all of that, Parliamentary time has been allocated to it and the Bill is being debated, so railing against the decision to bring it forward is a waste of time and effort.  It is far better that it pass in its present form than be withdrawn, for it will remove a minor anomaly and will tidy away an historical accident.  But we should not pretend that it represents any major advancement of equality for any genuinely disadvantaged group within society.  It is statutory tidying, nothing more.

Kenneth Norrie, Professor of Law at the University of Strathclyde