When people ask me what I study at Strathclyde, I’m sometimes met with incredulous looks in response to me responding, ‘Creative writing’.  I have discovered that though the Strath creative writing program may be considered small, it is certainly mighty.

Since beginning my course in September, I participated in a workshop for postgraduate students and notably this semester I joined a scriptwriting workshop with Strathclyde’s Keith Wright Fellow, Alan McKendrick.  For the length of the term, several students and I created original plays that concluded in a staged reading featuring professional actors based in Glasgow at The Butterfly and the Pig in the city centre.

I have always wanted to get involved in scriptwriting, and admittedly have several drafts of incomplete plays saved on my computer, but never had the guidance on how to write for the stage effectively.  The 100 days between when I started the workshop to our final reading, I learned not only how to write a play, but how to be a better writer as a whole.

I also learned to release my apprehensions of sharing my writing with others.  By its nature, a script is meant to be performed, which means it’s impossible, or rather impractical, to keep it locked away.  I discovered there are three levels of presentation when writing within the workshop setting.  First, the piece must be presented to members of the workshop for criticism, which for me was my biggest hurdle.  The longer I waited to share my piece, the more I grew intimidated by the thought of my work being ill-received.  However, a critique is simply a part of the game of writing and a necessity for growth.  Above all, in a workshop environment, every member’s work faces criticism, which creates solidarity among writers.  Once I overcame this intimidation–and realized there was never anything to be intimidated about–I grew more confident in my re-writes and additions to my script.

The second level of presentation is the initial reading with the cast.  Each participant in the workshop had the opportunity to meet with their cast before the final performance in a relaxed dress rehearsal setting.  This gave us the chance to work with professional actors who were not present in the development of our finished scripts.  The actors’ reception and impression of the scripts acted as a final edit of sorts for the performability of our scripts.  Minor revisions were made to stage directions, the staging of the actors, and lines in order to create a performance that the actors could successfully deliver while staying true to our individual visions for our creative endeavours.

This brings me to the third and final level of presentation: the final reading.  When I participated in a reading of my work in the past, I was always the one reading my own works, so for me, it felt surreal to sit back, listen to my words come out of others’ mouths, and watch the audience react.  But once again, this experience was shared between each of my fellow amateur playwrights as we all watched our own pieces be performed and applaud each other.

What I found to be the most rewarding element of my adventure in scriptwriting was completing a finished piece in a community of my peers in Strathclyde’s creative writing program.  As we met throughout the term, I grew invested in the attendees' pieces and wanted to see each piece and its author flourish; this feeling was mutual.  Many of us did not get the chance to see the final edits and changes made to some scripts, so the final reading acted as an additional celebration of each writer’s progress.  After each performance, we shared whispered praises of “I liked those new lines you added” and silent head nods across the room to acknowledge a job well done.

Being a postgraduate writing student can be an isolated adventure, but my time spent developing my script challenged me to write constantly while surrounded by other talented writers from the university.  I walked away from the workshop with my first ever finished script, deeper confidence in my ability as a writer and new connections with creative minds at Strathclyde and Glasgow as a whole.  I am tremendously grateful to Alan McKendrick and my fellow workshop members for giving me the chance to check an item off my writing bucket list. 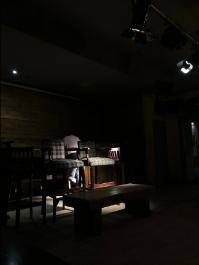