Dr David Wilson joined the School of Humanities as a Lecturer in Early Modern Scottish and Maritime History in 2019. David is also a Co-Investigator on One Ocean Hub.

Tell us a little about your career so far...
Having completed my PhD in History at the University of Strathclyde in 2018, I am in the early stages of my career. After my PhD, I was employed as a postdoctoral teaching assistant at the University of Strathclyde for the 2018-19 term, during which time I had the opportunity to coordinate undergraduate and masters modules drawn from my own research interests. Then in July this year I was appointed as a Lecturer in Early Modern Scottish and Maritime History, which is a three-year post coinciding with my role as a Co-Investigator on One Ocean Hub, a transdisciplinary project funded by UK Research and Innovation (UKRI) through the Global Challenges Research Fund (GCRF), which is led by the University of Strathclyde with 24 research partners, and 35 project partner organisations.

What has been the most memorable moment of your career to date?
I have relished the opportunity to share my research interests with students, and view their engagement with topics relating to empire, colonisation, and maritime history. Coordinating my own masters module – ‘Plantations by Land and Sea: British imperial projects in the Atlantic and Indian Oceans, c. 1590-1720’ – has been a particular highlight. I have encouraged students to look at understudied aspects and sites of early modern colonisation, and undertake their own research of historical documents each week to bring new perspectives to these topics. The most memorable moment from that was when I held a session to support students in setting their own assignment question, and every student turned up prepared with unique, original, and important topics for research, all of which would offer a valuable intervention in the existing scholarship while speaking to ongoing debates in modern society.

From a research perspective, the most memorable moment so far was a conference that I co-organised at the University of Strathclyde in June this year, titled “The Problem of Piracy: An Interdisciplinary Conference on Plunder by Sea across the World from the Ancient to the Modern.” This brought together forty international researchers over a three-day period, and proved to be a constructive, positive, and entirely fruitful forum. This was the first time since I started my PhD that there was a conference open to all aspects of maritime predation across chronological, geographical, and disciplinary barriers, and its success has led to the potential to continue building a network and breaking down barriers within the scholarship on piracy for years to come.

I should also say that undertaking research in the Archivo General de Indias in Sevilla is always nice…!

What sparked your interest in History?
Like so many, my initial interest in History was sparked by a particularly eccentric and engaging high school teacher, who encouraged my interest year upon year. At undergraduate level, I had started with the initial idea to undertake History and Law, but was drawn more heavily to History (including legal history) and so ended up pursuing a Single Honours. I had never contemplated undertaking a Masters (nevermind a PhD!) until I completed my undergraduate dissertation. Having found a topic that I was passionate about, which had been influenced by the outstanding and wide-ranging teaching in both early modern and modern imperial history that I had received throughout my undergraduate at the University of Strathclyde, I was keen to explore it further. During my Masters, I was fortunate enough to gain the support of Alison Cathcart, whose research and perspectives on maritime communities has been a huge influence on me and who encouraged me to take my research further and pursue a PhD. While History has always been an interest of mine from a young age, it has been the continuous support and encouragement of educators from school through to undergraduate and postgraduate that has encouraged me to continue pursuing a career in this field.

What is your role within the school?
As a Lecturer in Early Modern Scottish and Maritime History, my role is to offer a pathway in early modern imperial history that incorporates Scottish history and continues from undergraduate through to postgraduate level. Having started this process last year with a third-year, Honours, and masters module, I envision building on these classes to offer a second-year option on the Spanish empire that introduces students to early modern empire-building, as well as an additional Masters module on European and non-European early modern empires in the second semester that builds on my existing first-semester module. These classes will also offer the opportunity to build links across the School, particularly with modern languages.

Given my interests in maritime and colonial history, particularly the practical application of law on ocean spaces, my role will also be to strengthen ties between History and Law. As a Co-I on One Ocean Hub, my research will be conducted in close conjunction with Law, and will offer opportunity for cross-disciplinary exchange and collaboration through joint engagement, dissemination, and impact activities.

What current trends do you see influencing your field?
As a historian focusing on maritime empires, the major movement influencing both my research and teaching in this field is the drive to decolonise history - whether that means decolonising research, museums, or the curriculum. This has led to more proactive engagement with non-European voices within imperial history, and has also broadened debates and understandings by moving away from predominantly settler narratives to a greater understanding of the geopolitical, environmental, and socioeconomic impact of empire and colonisation that continue to impact formally decolonised regions throughout the world. Within early modern research, this has encouraged greater engagement with oral traditions, material culture, and archaeology, alongside more in-depth and creative readings of historical documents to uncover voices and perspectives that have hitherto been neglected.

What initially attracted you to the University of Strathclyde?
I have undertaken my undergraduate, masters, and PhD research at the University of Strathclyde, and have always been drawn to the genuine passion that my colleagues within the School of Humanities have shown for supporting and encouraging students. It was such support and encouragement that gave me confidence to pursue further study, and I am delighted to be afforded the opportunity to join the School and provide encouragement to the next generation of students. At the same time, the excellent research environment of the School of Humanities, and the opportunity for collaboration on topics surrounding empire and colonisation, makes me particularly excited about the next three years.

Tell us about any research you are currently involved in.
I am currently completing a monograph based on my doctoral thesis for Boydell & Brewer titled Suppressing Piracy in the Early Eighteenth Century: Pirates, Merchants, and British Imperial Authority. This utilises British attempts to suppress piracy within the Atlantic and Indian Oceans to examine how imperial power was extended to oceanic spaces. Arguing against existing interpretations that the British state coordinated a “war against pirates” in the early eighteenth century, I argue that this relied on a series of disconnected campaigns that were undertaken by diverse imperial participants who sought to protect specific coastal expanses and sea-lanes from pirates. Far from a coordinated effort, these campaigns reflect the pragmatic and reactive nature of imperial authority and maritime power throughout the British empire in the early eighteenth century.

My research for One Ocean Hub focuses on the interplay between maritime activity and regulation in Ghana and the Solomon Islands – two of the five regions of focus for Phase I of the Hub - between the seventeenth and nineteenth centuries. Responding to urgent challenges facing the ocean, the Hub envisions an integrated oceanic governance, which encourages the implementation of international law in line with the United Nation’s Sustainable Development Goals while empowering vulnerable communities and integrating their knowledge into responses to environmental, economic, and socio-cultural impacts of climate change. Providing an historical perspective on these challenges, my research centres on communities living at the interface between land and sea, viewing these regions within the wider framework of empire and colonisation, and examining how control over coastal regions and local connections with the sea changed between 1600 and 1900 as African, European, and Solomon Island polities vied for control over littoral spaces. I investigate how oceanic governance was viewed, applied, and contested in localities and how this, in turn, not only influenced and transformed local engagement and attitudes to the sea, but also influenced the approaches of imperial polities towards coastal jurisdiction, and led to the development of conflicting local, provincial, and imperial jurisdictions that continue to influence contemporary maritime law within these regions to this day.

Any special thanks or shout-outs you'd like to give to colleagues who have helped or inspired you throughout your career here?
I have to give special thanks to Dr Alison Cathcart, senior lecturer in History who recently left Strathclyde, and who has been such a central figure during my time here. It was Alison who inspired me to undertake doctoral study and who has provided (and continues to provide) persistent support during my progression from student to lecturer. I would not be in this position without her support, encouragement, and confidence. Since joining One Ocean Hub, Professor Elisa Morgera has been an outstanding and inspiring mentor, and has been a constant source of support as I explore new research avenues and collaborations. Special thanks must also go out to my colleagues in History and the School of Humanities, my neighbours in English village, and my fellow researchers on One Ocean Hub who have all provided support, encouragement, and advice as well as a source of constant comradery. I am lucky to have such a network of inspiring and supportive colleagues who have encouraged me throughout various stages of my journey at Strathclyde.

If you could switch jobs with someone, who would it be?
Nick Cave.

What keeps you busy outside of work?
My main hobbies surround music, whether going to or playing gigs. I’ve been playing in bands (which will remain unnamed!) with the same group of friends since high school, and we’ve been lucky enough to be able to play at various weird and wonderful festivals throughout Europe. It’s been a great way to stay connected with friends, and it’s always a privilege to see places and attend festivals that we may not otherwise have a chance to.

In one word describe what Strathclyde means to you.
Support. 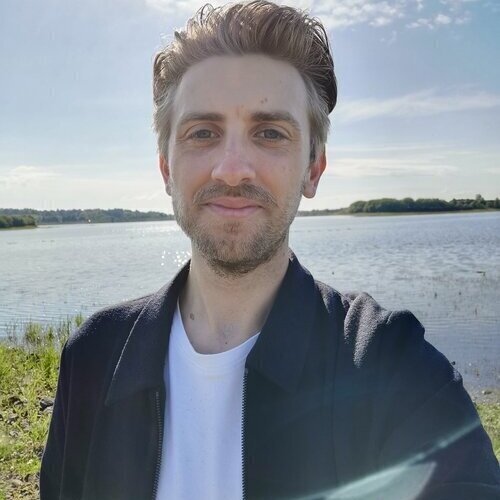