Professor John Reilly from the School of Psychological Sciences & Health has been included in the prestigious annual Highly Cited Researchers list from Clarivate Analytics. It identifies authors of multiple papers ranking in the top one per cent by citations for their fields and publication year, demonstrating significant influence among their peers.

Professor Reilly joins 6,600 researchers from more than 70 countries and regions who have demonstrated significant influence in their chosen field or fields through the last decade. Professor Reilly is also included in the 'Cross-Field' category and his research work includes interventions for the prevention of child and adolescent obesity worldwide and the consequences of obesity and low physical activity in children and adolescents. 0.01% of Science and Social Science researchers are included in the Highly Cited list, so this distinction is all the more noteworthy.

By recognising researchers with high citation impact—rankings based on millions of citations—the list celebrates both the reach and the influence of international research in 21 fields of study.

The United Kingdom has 492 researchers on the list, following the United States and Mainland China, which have 2,622 and 935 respectively.

For the first time, researchers from Bangladesh, Kuwait, Mauritius, Morocco and the Republic of Georgia are included on the list this year.

This year’s list includes 24 Nobel laureates, including five announced this year and 77 Citation Laureates - individuals recognised by Clarivate, through citation analysis, as ‘of Nobel class’ and potential Nobel Prize recipients. 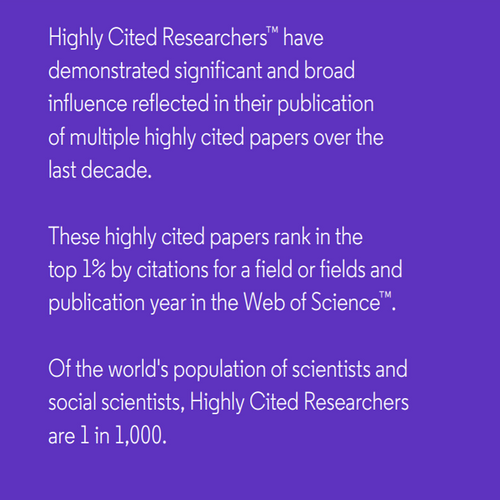