Am I a visual learner? – The learning styles myth by Jonathan Firth

In the first of a series of ‘mythbusting’ posts on this blog, Jonathan Firth argues that the idea of learning styles is not based on evidence and can lead to flawed classroom practice.

Students often say things like ‘this revision method works for me’, or ‘that’s just the way I learn.’ Are these statements valid? And how should we handle them as educators?

When I was a new teacher, I was often encouraged to cater for different ‘learning styles’ via my lesson planning. And I am sure you will have heard of the idea that some people are ‘visual learners’, others are ‘auditory learners’, and so forth.
However, today the idea that people can be categorised according to a learning style and that they should study or be taught accordingly is considered an educational myth. It is at best a waste of time, and at worst harmful and counterproductive. In this post I will outline why this is the case.

Overall, the proposition is that each of us will take information in more successfully if we perceive it via our preferred modality. A simpler ‘VAK’ version of the model is widely used too, and there are others. In fact, over 70 different models of learning styles have been published – something that in itself illustrates the lack of a scientific consensus behind the concept (Pashler et al, 2008). I’ll focus on the VARK concept here, but the other models tend to suffer from exactly the same problems (see Kuepper-Tetzel, 2017).
In their defence, such ideas tend to stem from a well-meaning attempt to explain why some children underachieve, and to help them. At worst, though, they have highly counterproductive effects – for example, children categorised as ‘kinaesthetic learners’ being denied access to school subjects which focus on literacy.

The first thing we can say about the idea of learning styles is that the methods used to categorise learners are very subjective. Self-report questionnaires are often used, typically with multiple options asking about what kind of learning experiences the student enjoys most (such as asking if they would prefer to watch an instructional video or hear an explanation). These are more a measure of preferences than of how people actually learn. 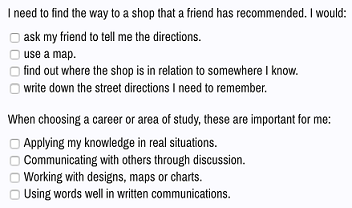 Just because students prefer to work in a way they enjoy (for example, watching YouTube videos) doesn’t make it more effective. Most lack insight into their own learning, and will usually pick easy options over effective ones (Bjork, 2018). As Harold Pashler and colleagues have commented, “the fact people can be sorted based on their self-reported impressions about what works for them does not make them right about what works for them.” (Pashler et al., 2015, p. 123).
As an analogy, people’s subjective preferences for types of exercise will not always be a good guide to the best ways of improving their fitness. It’s also interesting to note that teachers and their students often do not agree about each student’s preferred style (Papadatou-Pastou et al, 2017).
As educators, we should aim to tackle the idea that intuition is a good guide to how we learn. The idea that ‘I feel this works for me’ should be a red flag for teachers. Students intuitively prefer poor study strategies like short-term cramming, re-reading and highlighting – all poor ways to learn (Dirkx et al, 2019). It would be preferable to instead teach them evidence-based strategies in the classroom, so that they can then apply these to their independent study (Riazat & Firth, 2020).

Secondly, it is perhaps obvious that the four categories in VARK are very simplistic, and don’t really account for the complexity of the material that is being learned (which tends to be multi-sensory). Let’s say a high school class is learning about glaciation. Would it really make sense for some learners in a class to study this with a diagram alone, and others to get a verbal description alone? It would seem helpful to have both of these things.
To take another example, imagine that driving schools allocated people to learning styles, and told a quarter of those who wanted to learn to drive that they were ‘reading-writing’ style learners, and would therefore be given a book about driving rather than trying it out practically. It really doesn’t make sense! And even though driving is in many ways a kinaesthetic task, learning to drive also involves listening to auditory instructions, and making sense of visual information on the road. Successful learning can and typically does involve multiple senses, and the exact combination depends more on the task than it does on the learner.
Ultimately, we remember things not through sensory codes but in terms of their meaning – we construct new memories by making sense of incoming information, categorising it, and linking it to what we already know.

Thirdly, while it is obvious that learners tend to be good at some things and not so good at others, this doesn’t mean that these are inherent limitations or styles. They are better characterised as strengths and weaknesses – and weaknesses can be improved upon.
To put it another way, nobody is denying that people have different ability levels – but these don’t imply that we should do all of our learning in a particular way. You are probably better at dancing than me, for example, but this doesn’t mean that it would be a good idea for you to learn about this topic via the medium of dance rather than by reading this blog post.
In the school classroom, there is also a concern that playing to students’ strengths could mean neglecting weaker areas (An & Carr, 2017). If a learner was very good at understanding diagrams and poor at reading, for example, wouldn’t it make sense to improve their reading, rather than giving them all their work in the form of diagrams?

Reviews of the evidence

Of course, the most important questions to ask about teaching strategies that are based on learning styles is ‘do they work’? And this has been extensively studied. If learning styles do actually exist and make a difference then people should learn more successfully (in terms of long-term attainment) if they study in their preferred modality (e.g. visual). This is sometimes called the meshing hypothesis.
In a review of multiple research studies, Pashler et al. (2008) evaluated this hypothesis and found that there was no evidence to support it. Since this work, a number of other field studies have been done, but these have simply added to the evidence suggesting that learning styles do not actually exist. For example, Husmann and O'Loughlin (2018) used a ‘VARK’ questionnaire with medical students to allocate them to one of four approaches to studying. Students who did study according to their preferred style did not score any better on later assessments.
Granted, you can probably find studies that claim to support learning styles, but many have major methodological problems, for example by relying on teacher or student self-report of whether they thought that an intervention worked. There is evidence that people seem to feel as if they are learning better in their preferred style, but that doesn’t mean that it is actually helping. As Knoll et al (2017, p. 544) reported from their study of this issue, “As predicted, learning style was associated with subjective aspects of learning but not objective aspects of learning.”

Learning styles is generally seen as a myth by psychologists and education researchers today. However, this doesn’t stop the idea being widely endorsed by teachers (between 70% and 95% in a range of recent studies), and sometimes recommended by universities to their incoming undergraduates.
The sooner we put a stop to this misinformation the better. Attempting to cater for learning styles is likely to unhelpfully narrow learners' experiences and set them up poorly for independent study, while wasting teacher time which would be better spent using evidence-based techniques to help those who are struggling.
Rather than labelling our students, we can aim to provide them all with as rich and varied an educational experience as possible.