Procedure for Progression between Professorial Zones

In 2016, the University’s Executive Team and Staff Committee agreed that a zoning system for professorial staff would be introduced to deliver: ﻿

This system was developed and piloted during 2015.  The Professorial Zoning Steering Group, chaired by the Vice-Principal and including cross-faculty representation, oversaw the development of the zoning framework and was involved in the implementation.   The detailed zoning criteria used to determine individual zone allocations were developed through four working groups.  These Working Groups comprised Vice-Deans and other senior academics from across the University. ﻿

The implementation of Professorial Zoning commenced in February 2016, across all Departments and Schools within each Faculty, with all ﻿Professors being asked to complete online templates detailing their contribution against the zoning criteria during February and March 2016.  A matching process with input from Departments/Schools and Faculties then took place during 2016.

The outcomes from the matching process are being communicated to Professors during January 2017.  If you have not received your Professorial Zoning outcome letter by Friday 27 January, please contact profzoning-project@strath.ac.uk.

The zoning framework has four zones which are described below.

A high level timetable for the implementation of zoning is shown below. 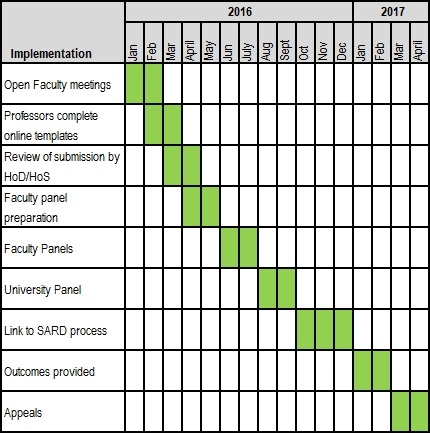 Further details on the implementation process can be found in the Professorial Zoning Matching Process Guidance Note .

These FAQs have been developed by the project team and will be added to as the project progresses. If you have any additional questions email profzoning-project@strath.ac.uk﻿, discuss this with your Head of Department/School or contact your HR Manager.

Q: Why is the University changing the pay arrangements for professors?

A: Professorial Zoning will deliver:

Q: How many zones are there?

Q: How will the zones be distributed?

A: Based on the pilot process and experiences of other Universities it is expected that the majority of professors will be matched to zones one and two. The exact distribution will not be known until the matching process is complete.

Q: How will professorial zoning help my career development?

A: Professorial zoning will enhance the clarity of senior academic career paths, through the publication of detailed criteria for each zone and through related performance and development discussions and feedback.

Q: Who designed the new system?

A: The final Professorial Zoning system has been developed as a result of the inputs of a range of academic staff across all of the Faculties. A Professorial Zoning Steering Group, with representation from the Faculties, Finance and HR, is overseeing the development and implementation of the new system.  The Steering Group established four Working Groups made up of a wide range of academic staff in order to develop the detailed zone criteria. During the implementation phase of the project, there will be regular communications with relevant stakeholders, e.g. current professors, Faculty management teams, Heads of Department/School.

Q: Is the University intending to achieve cost savings through this scheme?

A: The purpose of introducing Professorial Zoning is not to make cost savings but to ensure that our professorial population has an improved pay, reward and performance structure.  In the short term there may be additional cost to the University as a result of salary assimilation arrangements and in the longer term the exercise is expected to be cost neutral.

Q: Will my pay increase as a result of moving to the new pay arrangements?

Q: What is involved in the matching process?

A: The matching process to move staff on to the new structure will involve an assessment of every professor using the zoning criteria. Each professor will be able to provide evidence to inform this process through an online template. The template will also include relevant data from the Pure system from 1 January 2010 onwards which will also be made available to matching panels. Heads of Department, Executive Deans and appropriate panels will be involved in the process of reviewing professorial contribution and assigning zones. Further details on the implementation process can be found in the Matching Process Guidance Note.

Q: What criteria will be used to allocate professors to a zone?

A: Specific criteria have been developed by cross-Faculty Working Groups, using the key academic activity themes of research, teaching, knowledge exchange and citizenship. These were piloted earlier in 2015 and have been refined based on feedback from the pilot process. Further details are available in the Professorial Zoning Descriptors.

A: The Working Groups sought to develop general criteria that can be broadly applied with due regard to academic discipline characteristics.

Q: Will I have to fill out additional paperwork?

A: Completion of an online template will be necessary as part of the initial implementation process but thereafter performance against zones will normally be covered by normal processes (e.g. ADR, SARD), as amended to fit with the new arrangements.  Where an individual is being considered for progression to a higher zone specific evidence will be required.

Q: Who will review my performance and development in the new system?

A: Heads of Department, Executive Deans and a University panel will each play a role in the review process, as is the case currently.  These arrangements will be updated to fit with the new zone structure.

Q: How often will my performance and salary be formally reviewed?

A: It is expected that the performance and development of professorial staff will continue to be formally reviewed on an annual basis through the ADR and SARD processes taking account of the Professorial Zone individuals are matched to.

Q: Is there scope for pay changes within a zone?

A: It is anticipated that each zone will have a salary range and that, similar to the current SARD process, salary adjustments will be selective and determined by an annual performance review process overseen by a University level panel.

Q: Is there any flexibility in the new system to pay higher where labour market forces may require a salary higher than the zone system may suggest?

A: It is recognised that there may be times where market forces dictate that a higher salary be paid than the zone system allows.  In these cases, Professors will be allocated to an appropriate zone based on their academic achievement and contribution. Additional market supplements may be paid dependent on the individual circumstances.  In these cases, any additional payments will be subject to a robust authorisation process and periodic review.

Q: Does this mean that the ADR system is going to change?

A: The basic principles of ADR will remain the same. The online forms will be revised for future reviews to consider what changes may be necessary to fit with professorial zoning requirements. In 2015-16 the requirements for Professors will be reduced. In addition to the ADR meeting Professors will only be required to provide progress against objectives for the review year and set future objectives for the following review year within the ADR system. The remaining sections of the online form will be optional for reviews undertaken during 2016.

Q: Does this mean that the SARD system is going to change?

A: It is expected that the basic principles of the SARD process will remain the same but changes will be required to ensure that progress within and across zones is considered.

Q: How will the new system impact on current recruitment practices?

A: The zone structure will enable recruiting managers to clearly determine the level at which a professorial appointment will be made. It is intended that vacancies will not normally be advertised on a particular zone but as appointment decisions are made, consideration will be given to the zone that the candidate best fits and salary placement will be in line with this.

There were four working groups across the themes, Research, Teaching, Knowledge Exchange and Citizenship as follows:

Each working group was supported by the Human Resources Team.

A professorial zoning pilot was carried out in the summer of 2015 involving a representative sample of 35 professors from across all faculties. The pilot tested the validity and reliability of the draft zoning criteria, documentation, governance and process. It also assessed ease of use and appropriateness of the supporting data gathered from the Pure system.

Following the pilot process, the Steering Group set up a Sub-Group to consider the feedback in order to further enhance the zoning framework and ensure that the zoning framework was Strathclyde centric. In particular the Sub-Group considered refinement of the zone allocation principles and amendments to the zoning criteria. The proposed matching process was also reviewed in light of the pilot feedback.

The following changes and refinements to the Professorial Zoning framework were made as a result of the pilot and feeback received  through engagement sessions.

The guidance for the matching process, template completion and the FAQ's have also been developed to incorporate lessons learned and feedback from the pilot process.

Faculty briefing sessions for Professors were held in January/February 2016:

Two open briefing sessions were previously held for professorial staff in April 2015 prior to the pilot being undertaken. A copy of the presentation slides can be found below for information:

Should you have any questions regarding the implementation of Professorial Zoning please email profzoning-project@strath.ac.uk﻿.﻿

Alternatively you can discuss these with your Head of Department/School, Executive Dean and/or your HR Manager.

﻿﻿The distribution of professors within zones is summarised in the pie chart below. 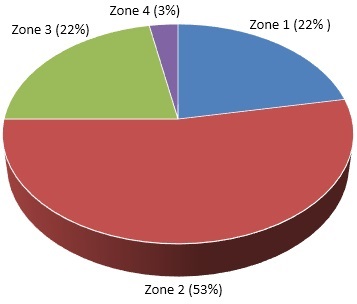 Zone 4 (3%) - Recognised world leaders with an esteemed record of academic excellence and leadership at the highest international level.

Procedure for Progression between Professorial Zones