Sept 2020 - SCELG member and Strathclyde Law School visiting professor Lorenzo Cotula co-authored a new report titled Raising the cost of climate action? Investor-state dispute settlement and compensation for stranded fossil fuel assets. The report was co-authored with Kyla Tienhaara, Canada Research Chair in Economy and Environment and Assistant Professor at Queen’s University, Canada, and it was published by the International Institute for Environment and Development (IIED).

The study explores the interface between energy transition policies and the international investment treaty regime. Global efforts to combat climate change will require a transition to renewable energy and government action to reduce reliance on fossil fuels such as coal, oil and gas. If followed through, such action will create stranded assets – in other words, economic assets affected by downward revaluations, or even converted to liabilities. 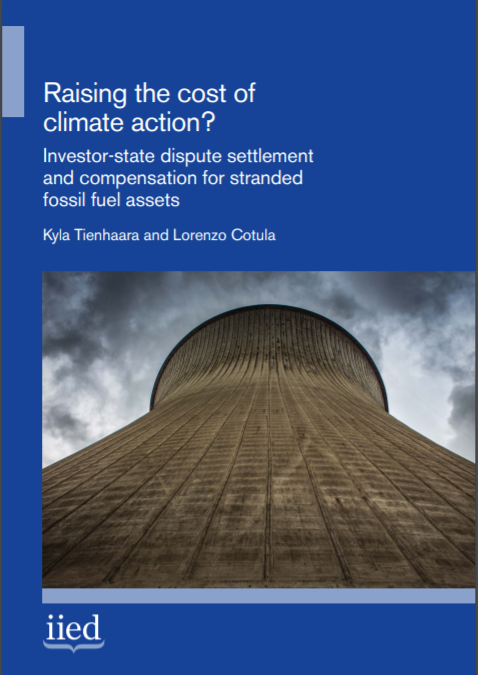 International investment treaties and investor-state dispute settlement (ISDS) typically allow foreign investors to initiate arbitral proceedings over state conduct they believe breaches investment protection rules, and to obtain compensation if the claim is successful. Questions have been raised as to whether investors will resort to ISDS to seek damages for fossil fuel phase-outs. Even in the absence of legal proceedings, the explicit or implicit threat of recourse to ISDS can provide leverage to the fossil fuel industry in negotiations with governments over possible compensation. As a result, more public funds may be spent on compensating the fossil fuel sector than would otherwise be the case, making it more costly for states – and ultimately taxpayers – to take energy transition measures.

The report develops a framework for assessing the extent to which energy transition measures could result in ISDS claims; explores the extent to which treaties with ISDS protect foreign-owned coal plants worldwide; and provides policy recommendations to help states preserve their ability to facilitate the low-carbon energy transition. The Economist profiled the report in a piece on how some international treaties threaten the environment.