April 2019: Claire Lajaunie and Pierre Mazzega, SCELG Affiliates are guest editors of a special issue of the Asian Bioethics Review on the Ethics of Biodiversity Conservation.

As biodiversity is now being lost at an alarming rate, to an extent that some scientists refer to the current period as the 6th (or Anthropocene) Mass Extinction, conservation of biodiversity and ecosystems are highly promoted across many Sustainable Development Goals (SDGs). Concurrently, the link between biodiversity and human health is increasingly recognized – as in SDG 3 on health – underlining the importance of considering health in an integrative manner, taking into account not only human health but also animal and environmental health in a One Health perspective. 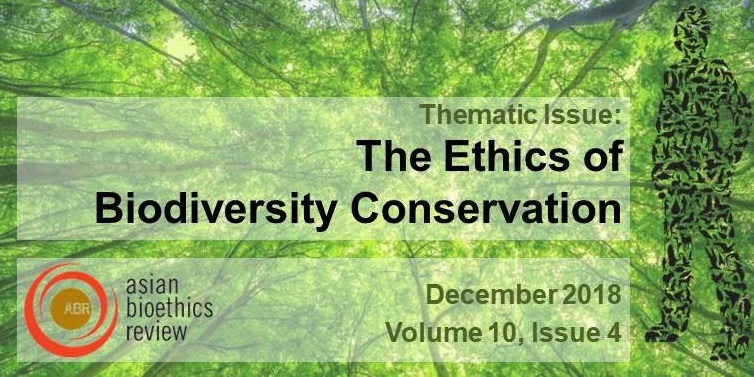 All these specific issues have a link with the academic research conducted at the Strathclyde Centre for Environmental Law & Governance (SCELG) whether it relates to biodiversity, climate change, forests, oceans & fisheries, land & food, water, human rights or environmental justice.

This special issue has shown that it was necessary to:

The publisher allows you to read all articles completely and online, even if you do not have a subscription by clicking on the title of the article.

SCELG is built on an agenda-setting research cutting across traditional disciplinary boundaries. With this special issue SCELG Afffiliates aim at opening a debate among SCLEG researchers and their partners about an ethical approach of their research.