A PhD student from the Department of Pure and Applied Chemistry has won a prestigious international prize for outstanding young Chemistry researchers.

Joshua Barham is one of three winners of the Reaxys PhD Prize, made annually by chemistry research portal Reaxys. He was selected from a shortlist of 45, drawn from more than 500 applicants at more than 300 institutions worldwide.

Joshua’s award-winning research explored the selective abstraction of hydrogen atoms from complex molecules, for potential use in medicine – with unexpected results.

He was named a winner after presenting at the Reaxys PhD Prize Symposium in Shanghai and received a cheque for $2000.

Joshua is due to graduate in November 2017 from a pioneering collaborative PhD programme offered by Strathclyde and pharmaceutical company GlaxoSmithKline (GSK).

He said: "The Reaxys PhD Prize is aimed at ‘celebrating the very best in chemistry research being performed worldwide,’ so, as a young chemist, to be recognised by this award means the world to me.  I'm thrilled to win. It's a testament to all the hard work I poured in to my PhD and to the efforts of those who supported me along the way. I'm deeply grateful to people involved in the collaborative PhD programme; it feels fantastic to be able to promote the international visibility and reputation of the PhD programme, and of Strathclyde, through winning this prize.”

Joshua won his prize for a study which set out a system for abstracting hydrogen atoms, opening up new possibilities in drug discovery. It built on the findings of a previously-published research paper.

He said: “We realised these chemical reagents could be applied in a different way and deployed for the industrially applicable transformation we were seeking.

“Serendipitously, we found that, in our case, the chemistry proceeded totally differently to the way we originally intended, and were amazed at the remarkable opportunities that it afforded for selectively targeting specific molecular sites. “Medicinal chemists can use our method to target and functionalise specific sites of complex molecules to test how the molecular structure at those sites influences pharmacological activity.

“This is critically important in the field of synthetic opiate medicines - used to treat opiate addictions or overdose - where small changes in molecular structure can completely reverse pharmacological activity. For example, a very small change in molecular structure can transform an analgesic molecule 10 times more potent than morphine into a molecule used to treat opiate overdose.”

During his time at Strathclyde, Joshua has broadened his experience by experimenting with practical electrochemistry and computational chemistry, as well as, in Strathclyde’s Department of Physics, photophysics.

“Fostering academic collaborations with scientists from different backgrounds sparked new ideas and furthered my ability to communicate science succinctly,” he said. “This is a key strength which I'm sure helped me win the Reaxys PhD Prize.”

Joshua is currently based in Japan for industrial postdoctoral research, working on a collaborative project moving between the National Institute of Advanced Industrial Science and Technology (AIST) in Tokyo and the University of Shizuoka. He is developing and evaluating new 'flow chemistry' reactors that use microwave heating technology. This technology offers greater heat transfer than conventional heating, is more energy-efficient and effects more rapid changes in temperature.

Joshua also won the silver medal in the Chemistry category of the 2016 SET for Britain awards poster competition, run by the Parliamentary and Scientific Committee and held at the Houses of Parliament. This award was for his research into using visible light as a clean, efficient, and safe energy source for the sustainable manufacture of pharmaceuticals.

“I was originally a pure organic chemist but found myself as a multidisciplinary scientist during my PhD,” he said. “I’ve worked in a number of different areas of chemistry, ranging from fundamental chemical mechanism understanding to novel synthetic methods for drug discovery to visible light photosynthesis, and have been fortunate enough to publish work in all these areas.”

Professor John Murphy, of Strathclyde’s Department of Pure and Applied Chemistry, Joshua’s PhD supervisor, said: “Joshua’s research on the selective abstraction of hydrogen atoms from complex molecules completely bypasses conventional processes for their elaboration, which involve multiple steps. Very often, the most relevant hydrogen atom is not the most obvious one, nor the easiest to remove, but he found a selective way to abstract it without involving any toxic or expensive metal catalysts. Nobody had thought of doing it before because there didn’t seem to be a way but Joshua found it and had his research published in the prestigious Journal of the American Chemical Society.”

This is a superb achievement for Josh as well as for his supervisors Prof John Murphy and Dr Matt John from GSK.﻿  Please find more information via the links below. 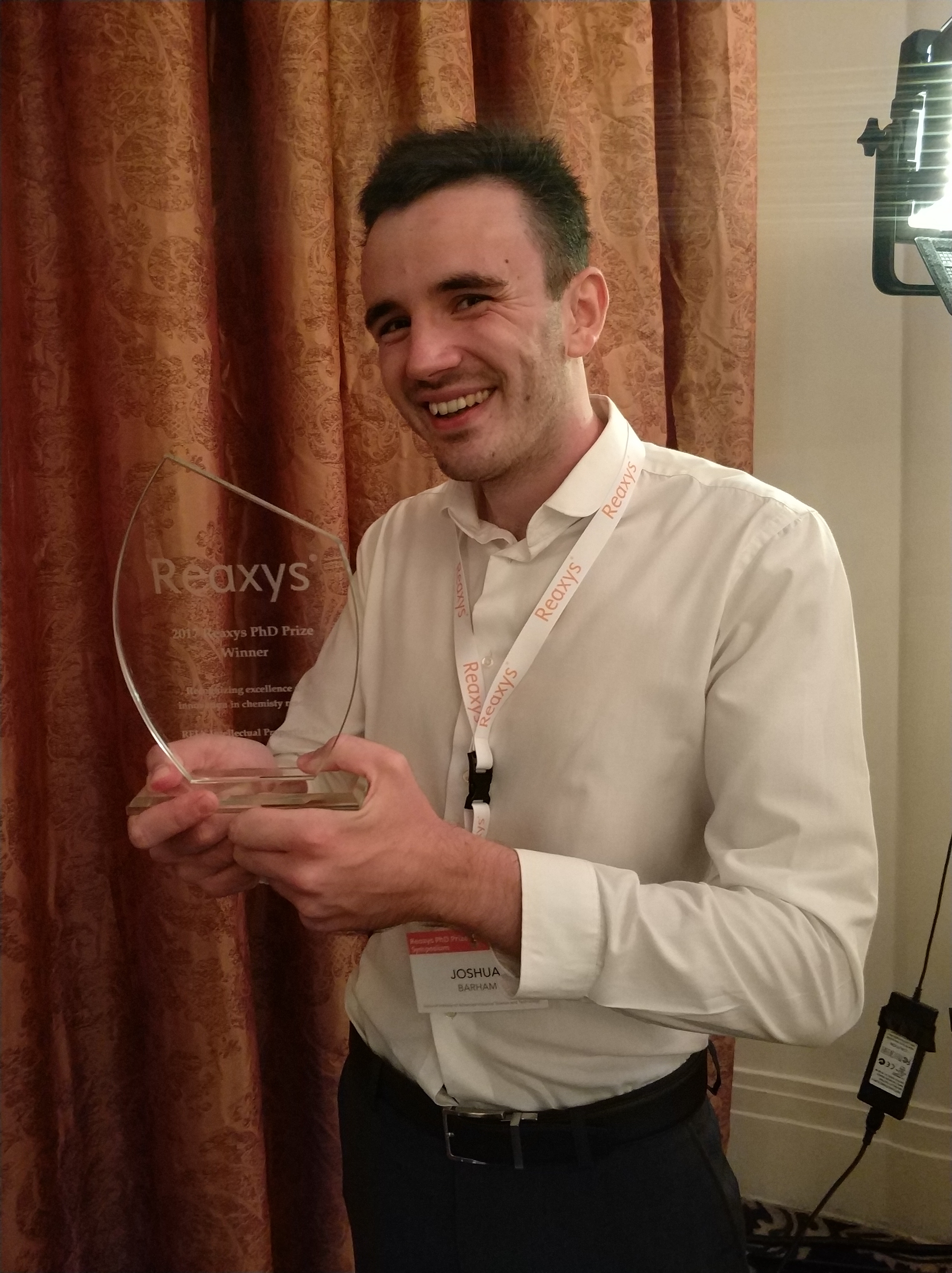