The David Elder Lecture series, public lectures on astronomy, is hosted by the Glasgow Science Centre in partnership with the University of Strathclyde.

The David Elder Lecture started in 1905 as a result of an endowment of 5,000 pounds made by Mrs Isabella Elder (nee Ure), Doctor of Law, to the Glasgow and West of Scotland Technical College, later to become part of the University of Strathclyde. The scope of the endowment is the maintenance of "Lectures of Descriptive Astronomy" (to be known as the David Elder Lectures) in memory of David Elder, the father of her late husband, John Elder.

Both John and his father David were outstanding Glasgow engineers. Of John it has been said, "Perhaps no greater loss ever befell the leading industry of the Clyde than the premature death of John Elder in 1869"; and Mr John Napier, in a paper read before the Institution of Engineers and Shipbuilders in Glasgow in 1866, referred to John's distinguished father, David, in the following terms, "The history of so remarkable a man as David Elder must be interesting to many, on account of his connection with works which have made Glasgow and the Clyde notable, and given to his employer (Robert Napier) a fame which is known over the whole engineering world."

He goes on, "David Elder was born in Little Seggie, near Kinross in 1785. From his earliest years, he evinced a genius for mathematical studies, and continued to master, without assistance, Simson's Euclid and a separate work on Algebra, translated from the French, which he walked 18 miles to procure. He studied the principles of mechanics and hydraulics by watching the workings of old water-wheels in the surrounding mills. In 1817, he came to Glasgow to practice as a mechanical engineer and millwright. His energy and ingenuity speedily procured his advancement, and he achieved considerable fame as an inventor and design engineer with Robert Napier's famous engineering work in Glasgow."

David Elder is regarded as the father of marine engineering on the Clyde, and you can find more fascinating information in Memories and Portraits of 100 Glasgow Men.

The first series of David Elder Lectures was given in 1905/06 at the Glasgow and West of Scotland Technical College. Since the early seventies, the David Elder Lecture has been organised by the Department of Physics of the University of Strathclyde.

Starting in 2015, a partnership between the Glasgow Science Centre and the University of Strathclyde has begun a regular monthly programme of talks running over the winter months, from September to March each year. The David Elder lecture series presents a line-up of talks from expert astronomers at the cutting edge of their fields of research.

Here are some of the distinguished lecturers who have presented the David Elder lecture: 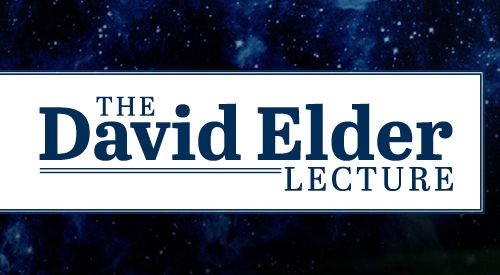