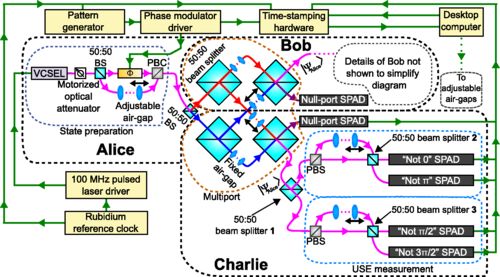 John Jeffers and co-workers at Heriot-Watt and Edinburgh Universities, have implemented a quantum digital signature protocol that does not require the quantum signature to be stored in quantum memory.﻿

They use unambiguous state discrimination to identify (sometimes) definitely the nonorthogonal states that form the signature. This measured signature is stored in normal computer memory. The team members extend the technique using unambiguous state elimination which, when they cannot determine the signature precisely, allows them at least to say what it was not – increasing the chance that a signature-forger reveals themselves. The work has been selected as an Editor’s Suggestion in July 2014 Physical Review Letters, Phys. Rev. Lett. 113, 040502 (2014) and is spotlighted in the Viewpoint section of Physics.﻿