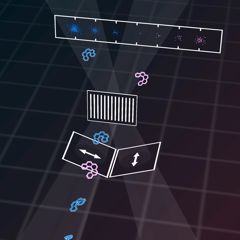 Many molecules, in particular those that underpin the inner-workings of living things, are handed, or chiral: like human hands, chiral molecules come in both left- and right-handed forms which are non-superposable mirror images of each other. These mirror-image forms, or enantiomers, often exhibit strikingly different biological actions: one enantiomer of the chiral molecule methamphetamine, for example, is used as a decongestant, whereas the opposite enantiomer is recognized instead as being a harmful narcotic!

The ability to characterise, discriminate between and resolve the enantiomers of a chiral molecule is desirable in both academic and industrial contexts and yet remains a challenge in many cases. In a recent paper in New Journal of Physics, however, Robert Cameron, Stephen Barnett and Alison Yao demonstrated that readily producible types of light can be employed to exert a force that accelerates opposite enantiomers in opposite directions. They proposed new devices based upon this novel optical activity phenomenon; from Stern-Gerlach-type deflectors to diffraction gratings, each with a chiral twist. Potential applications include the spatial separation of opposite enantiomers, the measurement of enantiomeric purity and much more besides.

Their paper was recently selected to appear in the New Journal of Physics "Highlights of 2014" collection. This collection is a special showcase of articles that have been chosen to represent the breadth of interest and excellence of the work published in the journal last year.﻿