Terahertz (THz) radiation lies between microwave radiation and infrared radiation in the electromagnetic spectrum. For over a decade, generation and applications of THz radiation sources have been attracting significant interest in wide areas. Laser plasma interaction is recognised as a way for producing the most powerful THz radiation pulses.  Recently, Zheng-Ming Sheng and co-workers from China, USA, and Japan have demonstrated to produce such a kind of THz sources via a mechanism called linear mode conversion, in which electromagnetic waves are converted from electrostatic waves excited in plasma. This mechanism was proposed theoretically by Sheng and collaborators 10 years ago [PRL 94, 095003 (2005)], which was later demonstrated experimentally as a way to generate coherent XUV radiation in laser-solid interaction by a French group [PRL 96, 125004 (2006)].﻿ 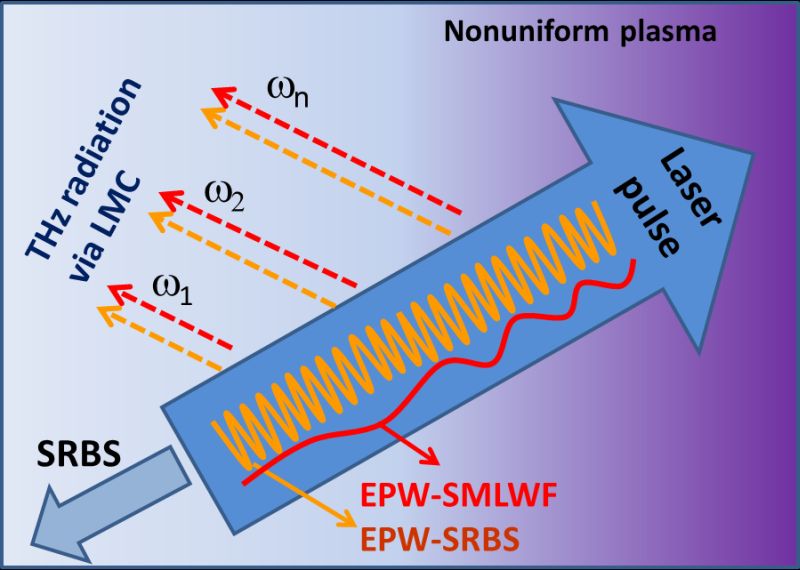 In the newly reported work [PRL 114, 255001 (2015)], they use a picosecond high power laser pulse experimentally to drive electrostatic waves in a large preformed nonuniform plasma, where the electrostatic waves are excited successively via the stimulated Raman backscattering  and self-modulated laser wakefields during the laser propagation.  The measured THz radiation shows an extremely broad spectrum (extending to over 10THz), typical with the mode conversion mechanism. This radiation can serve not only as a useful THz source for applications, but also as a unique diagnostic of parametric instabilities for laser propagation in plasma.  The problem of parameter instabilities is one of the key issues for inertial confined fusion.

In the meanwhile, Sheng and co-workers from Germany and China have proposed a concept to produce circularly-polarised THz sources by focusing two laser pulses into a magnetised gas target. In this work, which was published in PRL 114, 253901 (2015), they show that the free electrons from laser field ionisation of atoms will gyrate collectively in the applied strong magnetic field (along the laser propagation direction). The formed gyrating current emits elliptically-polarised radiation at the plasma-vacuum boundaries.  The radiation has a narrow bandwidth with its central frequency mainly determined by the magnetic field strength, which is distinctly different from the usual broadband linearly-polarised THz sources from short-pulse laser interaction with gas targets. This provides possibilities of a variety of new applications.